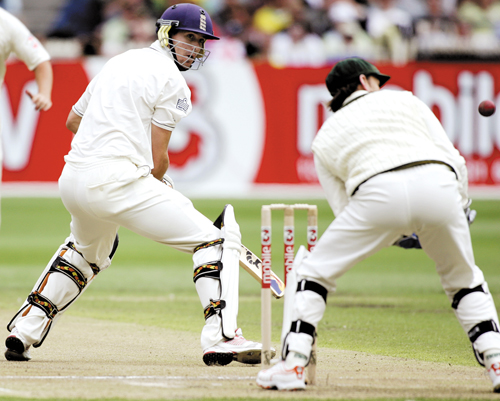 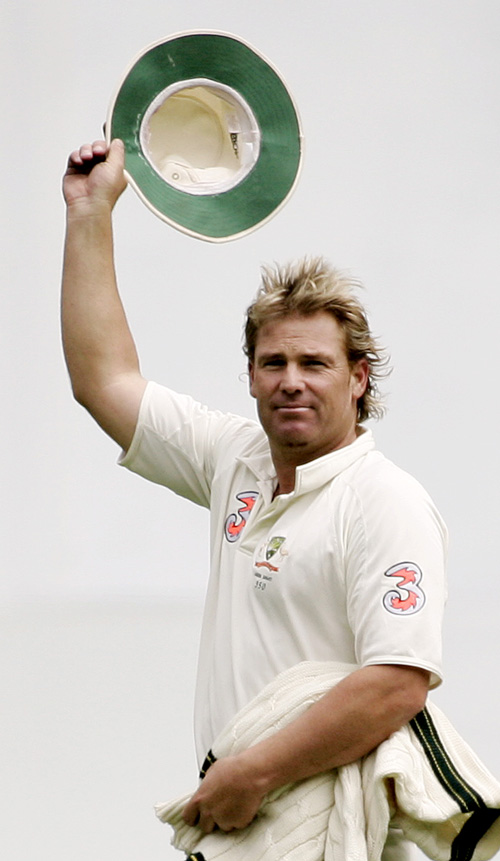 Shane Warne took his show to Melbourne for an encore and gave the packed house a vintage performance.
The 37-year-old legspinner yesterday became the first bowler to take 700 test wickets when he removed England opener Andrew Strauss in the fourth Ashes match.
He added the wickets of Chris Read, Steve Harmison, Kevin Pietersen and Monty Panesar and returned 5-39 from 17.2 overs - including 4-18 as England lost its last six wickets for 42 after tea - for his 37th five-wicket innings haul.
England, already down 3-0 and having relinquished the Ashes, was bundled out for 159 and Warne was the undisputed star for a home crowd of 89,115 at the Melbourne Cricket Ground.
The English hit back late with captain Andrew Flintoff taking wickets on consecutive balls, both caught behind, as Australia slipped from 44 without loss to 44 for two, before ending the day at 48 for two.
"Whoever writes my scripts is doing an unbelievable job ... keep it going," Warne said. "I can't stop shaking my head just believing it happened to be honest. It was a pretty amazing day.
"How it's all panned out, to have 699 coming to Melbourne and have the Ashes in the bag ..."
"There's some special things that happen in your life - the birth of your children, getting married, your first test - but that one today has got to be one of the best days I've ever had."
After squeezing a delivery between Strauss' bat and pad and knocking middle stump, Warne wheeled away to his left, pointing his right index finger in the air, as the crowd rose to give him a standing ovation.
"I was going to keep running, but I ran out of puff," he said.
When he finished off the tailenders, he retrieved the ball from umpire Rudi Koertzen and held up it to again acknowledge the crowd.
Warne is playing his 144th and penultimate test, having announced last week that reclaiming the Ashes was the best way to finish his international career.
The 700th test wicket was his 187th against England and came 13 years after he entered cricket folklore by bowling Mike Gatting with his first ball in an Ashes test.
Strauss was out for 50, on the second ball of Warne's fourth over, and England was 101 for four after winning the toss and deciding to bat.
Warne was also the first bowler to reach the 600 test wicket barrier, achieving that in the third Ashes test in England last year when he had then England vice-captain Marcus Trescothick caught behind at Manchester.
"Obviously nobody has done that before - I'm proud of that achievement, it's always nice to be the first," he said at the time. "It's been an amazing ride."
That moment was tinged with upheaval for Warne, whose marriage broke down before the 2005 Ashes series when the latest in a long line of sex scandals hit the British tabloids. And despite his 40 wickets in the series, Australia surrendered the Ashes for the first time in Warne's career.
Strauss said he could hardly believe he'd been bowled through the gate and would rather forget the delivery.
"I think there was probably 699 other guys who felt bad after getting out to Shane Warne and I'm no different today," he said. "It's obviously a great achievement for him and will live long in a lot of people's memories, but probably not mine.
"It was a great moment for a great player. It's not a consolation as you're trudging off the ground."
He has had to overcome serious finger and shoulder injuries and other upheavals including a rebuke for inappropriate dealings with an Indian bookmaker, a 12-month ban for testing positive to a banned diuretic and a string of sex scandals since his debut in 1992.
Through it all, his skill has rarely waned. Consequently nor has Australia's position atop the cricket standings.
Warne has headed the bowling list since taking his 533rd wicket in October 2004.
He was the second bowler to reach 500 wickets, following West Indies paceman Courtney Walsh, who retired with 519 wickets in 132 tests.
Sri Lanka offspinner Muttiah Muralitharan initially beat Warne to Walsh's record but had a lengthy spell on the sidelines after injuring his shoulder in 2004. Muralitharan is currently second on the all-time list with 674 wickets in 110 test matches.
Warne said he does not expect his record to survive long after he quits the test arena.
"I've always said Murali will get 1,000," he said. "And who knows, somebody else might come along and get 800 or 900 and I'll be well down the order."