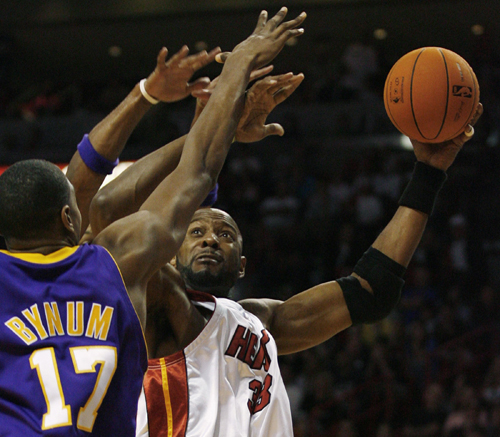 This is the best the Miami Heat has felt since holding up the trophy. Dwyane Wade mopped the floor with Kobe Bryant. Miami, 0-9 against winning teams, suddenly scorched a Los Angeles Lakers team that has more victories in a real conference than any team has in Miami's pudding conference. And although Wade was the star shining atop the Christmas tree in this 101-85 triumph, there was another gift wrapped on the floor - off to the side, underappreciated, but priceless nonetheless.
His name is Alonzo Mourning. The holidays are a good time to cherish the things you sometimes take for granted, and Mourning is certainly one of those. There isn't another story like him anywhere in sports, but the familiarity of it numbs you to its majesty. A wealthy champion not only playing with a borrowed kidney but doing so at a menacing and uncommonly efficient level with a passion that human nature suggests should have been extinguished by now? Where else in your sports section are you unwrapping that on Christmas Day?
He should be fat and satiated by now. But after all those pills, after all those lifted weights, after all those Pat Riley practices, the unrelenting Mourning continues to sweat - telling his inspiring tale one block, one grunt, one ache at a time. Mourning, 36, gets dunked on plenty these days, young and fresh and prideful legs challenging his reputation in waves, but he continues to go after everything with a force and fury and unconquerable zeal that still changes games like Monday's. Besides, for all his cartoon muscles and lack of body fat, Mourning's strength has never been revealed in the successes as much as it has been in getting up from the failures that preceded them.
In a league for the young, the old man continued to outwork the kids Monday. And if the holidays are a time for cherishing the little big things, for appreciation and for thanks and for charity, you'll have a hard time finding an athlete in Miami's history who embodies those things more than Mourning. We've seen him very healthy and very sick, watched him make the labored journey from scared to champion, all in a public and overt way. But Monday, on a national stage, what we watched him do was far more subtle - and buried under Wade's ridiculous line of 40 points, 11 assists, four steals and four blocks.
Legend Phil Jackson, looking weary, stood outside his losing locker room and wondered how his entire young and energetic front line managed to get into foul trouble against a center that, in Jackson's words, is "really in the twilight of his career." You don't see altered shots in a boxscore, but understand that the Lakers' 39 percent shooting and Bryant's 4-for-17 had a lot to do with the presence of Mourning. And here's something else Mourning impacts that you have to dig for in the lines between a boxscore's black and white:
Kwame Brown, 24, had two fouls before the game was four minutes old. Andrew Bynum, at 19 the youngest player in the league, subbed for Brown and had two more fouls in the next two minutes (Bynum had five in seven minutes for the game). So Wade was able to do whatever he wanted in the lane against undersized third-string center Ronny Turiaf, who is coming off open-heart surgery, which goes a long way toward explaining why Miami was never threatened and never trailed against a good team for the first time this season.
"Such a big, strong guy," said Brown, who is a chiseled 6-11 and 270 pounds. "He bangs you and makes you honest from the old school. Making you work. Just laying down wood."
Brown was asked if he was surprised at Mourning's strength at 36, and he crinkled up his face at the absurdity of that.
"Just look at him," Brown said. "He may wear out late because of his age, but look at him."
Miami hadn't felt like a defending champion once this year before Monday. Not once. But even though this is still the team of Wade, Shaq and Riley, there are plenty of players doing little things in the shadows to keep the season afloat until O'Neal's return.
Antoine Walker, who didn't take a single charge last season, has a team-leading 15 in 27 games. Miami is 9-0 when Jason Williams plays big minutes. Jason Kapono (three threes Monday) and Dorell Wright (10 points, good defense on Bryant) continue to be surprises who overcome Riley's misguided decision not to tinker with a roster that is one year older, not one year better.
And then there is the pillar presence of the steady Mourning, who spent a holiday afternoon giving South Florida another gift.