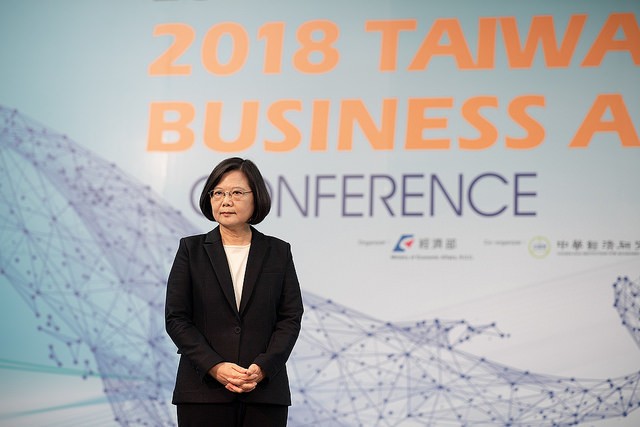 Organized by the Ministry of Economic Affairs, the Taiwan Alliance Conference kicked off on Monday in Taipei, an event that aims to promote Taiwan’s business opportunities and attract investment from around the world.

During her remarks, President Tsai said the Taiwanese government will be devoted to building an open and dynamic environment for investment, and would push forward innovation and sustainable growth.

“The government will strive to make the country the best place for investment in the world and a springboard for businesses aiming to expand to the entire Asia-Pacific region,” said the president.

The conference about attracting global capital to Taiwan was initiated 15 years ago and has since successfully attracted foreign investment in key industries to Taiwan, according to the authorities.

This year, Minister of Economic Affairs Shen Jong-chin (沈榮津) signed letters of intent for investment with 23 foreign enterprises, many of which are related to the industries promoted by the Tsai administration’s 5+2 Industrial Innovation Plan, such as green energy, smart machinery, and biomedical research and development.

An economic official said the letters of intent are likely to bring investment worth of NT$54 billion (US$173 million) to Taiwan and to create approximately 13,000 job opportunities.

Japan shows the greatest interest in investing in Taiwan, with eight enterprises reaching an agreement with the Taiwanese government, according to the official. The United States came in at second with four companies.

There are also businesses from Europe and Southeast Asia among the 23 companies that inked letters of intent with the Taiwanese authorities.