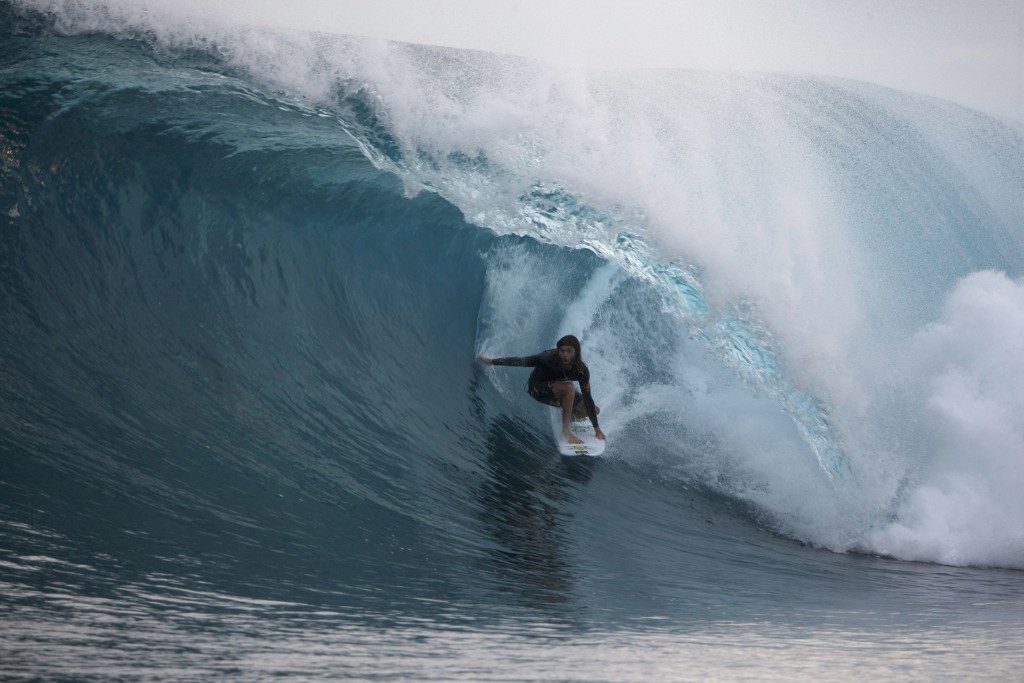 The 29-year-old surfer from Hawaii doesn't participate in a lot of contests. Not really his thing.

Matt Meola's a soulful sort of surfer who likes to fish , hunt , wants to design fishing lures using his hair and is raising a deer. That's right, a deer named Doe-nut .

He's backed by sponsors and has a film crew — more like one person — who follows him to the waves . The 2020 Tokyo Games, where surfing makes its Olympic debut? That's not him.

Meola's content catching a wave wherever — and whenever — there's a wave worth catching.

"All my best memories of surfing are my highlight waves I've caught," Meola said in an interview from Maui before leaving to participate in the World Surf League's aerial event in France beginning this weekend. "I'm more into the innovative side and trying new tricks."

His introduction to surfing began when he was 2 years old and his dad took him out. It wasn't his first love, though. That honor belonged to skateboarding as his family constantly took him to the park to ride. As a teen, his dad was working on a project near the beach and Meola tagged along. The lure of the ocean was too hard to resist.

He started on the contest circuit when he was 15 — a couple in Maui, a few more on the other islands, but it was expensive and really not his forte. Sure, he did well — really well, in fact, like winning a state championship — but he felt like he was in a pressure cooker.

"I don't like being told when to surf or only to be able to go out for 30 minutes at a time," Meola explained. "I see surfing more as an art form than a sport, anyway. It's hard to judge because everyone has got an opinion on who they like. I've never really been into it."

A few years back, he made a video clip — with the help of cinematographer Elliot Leboe — of his surfing exploits that won him a $100,000 contest . The video went viral and helped launch the next chapter of Meola's career, earning him a deal with Rockstar energy drink, along with other sponsors like Sanuk footwear. Before that, Meola was making $700 a month.

It changed nothing, though. He's still a surfer who's in it to, well, surf.

"I'm trying to do the next big thing that I haven't done yet," he said.

One of his favorite spots was in Peahi, Hawaii, which is better known as "Jaws" for its huge breaks that can exceed 50 feet. Once, Meola caught a giant wave and wiped out at the end. The wave engulfed him and the leash from his board bound his feet together. Somehow, he worked his way free .

That was pretty much the end of his big-wave riding.

"He was shook up for a very long time," his mom, Nancy, recounted. "He charges and goes for it, but we're like, 'You know, you don't have to do that.'

"He just loves surfing more for its artistic representation. He's an artist. His art is putting together these videos that are anticipated, because he's probably one of the most innovative surfers of his time."

These days, he's way into aerials, where a rider does a trick off a wave. He studies snowboard and skateboard maneuvers and takes them to the water, even though no two waves are the same. The WSL will hold a contest this week for this event and he's among the favorites — even if he's not a big contest person. The event will feature a deep field spread across qualifying heats and a final.

For most, it could be viewed as a good way to squeeze some practice for the Tokyo Olympics that's off the distance.

Not for him. The Olympics aren't on his radar.

"Winning a gold medal would be pretty huge," Meola said. "But to me, the best surfer in the world is the surfer who can do it in all conditions.

"My passion is to go out and try to get the best footage I possibly can and piece it all together and make a cool edit for people to watch."

A maestro on his surf board, Meola and his buddy, Jon Spenser, have crafted numerous short films . Meola's the actor, of course, and helps pick the music to capture his unique wave riding.

On his musical playlist these days is a mixture of country, Rolling Stones and, of course, songs from his sister, Lily , a bluesy sort of singer — think Joni Mitchell, Amy Winehouse and Ella Fitzgerald — who was singing in a cafe one day when Willie Nelson walked in. Yep, that Willie Nelson. He wrote down some songs on a napkin and said he would like to sing them as part of a duet with her. He ended up financing her first record and taking her on the road.

That resulted in Lily Meola being signed by Interscope Records, where she's currently working on a new album.

When he's not surfing, he's fishing or bow hunting. Among his pets is Doe-nut , a deer he took in.

This is how he came to raise a deer: While hunting on a ranch, a buddy texted him that he had shot a deer only to discover she was pregnant. His friend delivered the fawn, gave her CPR when she wasn't breathing, and put her in a backpack to carry out. They met up with Meola, who ended up adopting the fawn. She's become part of the family .

A soulful sort of surfer.

"I'd like to be more recognized as an outdoorsy person who likes to surf, hunt, spearfish and fish," Meola said. "Surfing is a small part of that. When you blend it all together, that's really who I am."