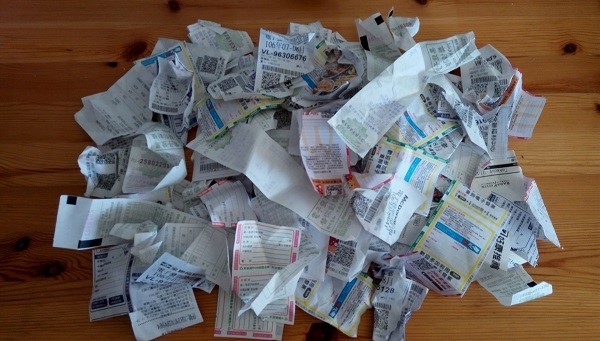 TAIPEI (Taiwan News) -- A lucky convenience store customer who bought a newspaper for NT$10 (US$0.32) was one of 11 winners of the NT$10 million special prize in the July-August draw of the Taiwan uniform invoice lottery draw, while another person also spent NT$10 on milk tea and won the NT$2 million grand prize, announced the Ministry of Finance (MOF) yesterday (Oct. 2).

According to the winning numbers announced on Sept. 25, the persons holding a receipt issued in July or August with the number 73372972 are eligible to receive the “special prize” of NT$10 million, while those holding the number 22315462 can collect the “grand prize” of NT$2 million.

The biggest winner among the 11 recipients of the NT$10 million special prize this time around was a person who spent a mere NT$10 a copy of the Mandarin Daily News (國語日報) on Muxin Road in Taipei's Wenshan District, according to CNA. The person who spent the most and won the special prize paid a NT$629 power bill at the Taiwan Power Company branch office in Taichung.

Another particularly lucky winner spent NT$15 on a processing fee for a loan payment at a 7-Eleven on Daguan Road in New Taipei City's Banqiao District and came away with the NT$10 million special price. CNA cited a Tax Administration official as joking that that once they receive the special prize, they should be able to pay off the loan.

Among the 16 who were awarded NT$2 million grand prize in the latest draw, the biggest winner was a person who purchased a milk tea beverage for NT$10 at a FamilyMart convenience store on Shuiyuan Street in New Taipei City's Tamsui District, according to the report. The person who spent the most to win the grand prize purchased a beauty care kit for NT$16,000 at a Switer Cosmetics Beauty Care Center on Nanchang Road in Taipei's Zhongzhend District.

As for the additional prize, there are two numbers this time around: 163, 983 and 814. The last three digits of receipts with one of these two numbers will garner a NT$200 prize.

The ministry reminds all winners of the July and August uniform invoice lottery to claim their prizes between October 6, 2018 and January 5, 2019.

In order to receive the prize money of this issue, a winner must fill out the form on the back of the uniform invoice and present it with his or her ID card at any post office from October 6, 2018 to January 5, 2019, the MOF said.

NT$200 winners can also present the winning invoices to any of contracted convenient stores around Taiwan, where they can either add the value to their payment cards or purchase merchandise of the equivalent value, but the value must not be less than NT$200 as no change will be given back.

The lottery, designed to boost tax revenues, was introduced on Jan. 1, 1951. The lottery has successfully encouraged people in Taiwan to obtain receipts for every purchase made with businesses with a certain amount of monthly turnover.