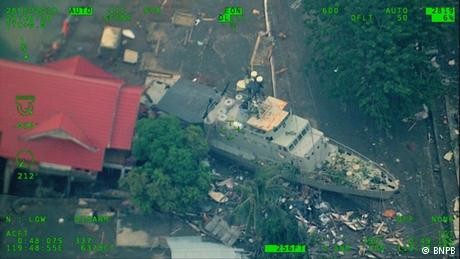 The Indonesian government is struggling to mount a response to the destruction caused by the 7.5 magnitude earthquake, which triggered the tsunami on Friday.

The Southeast Asian country on Monday called for international help to deal with the aftermath.

Indonesian authorities confirmed at least 1,200 people have died as a result of the earthquake off the coast of the Indonesian island of Sulawesi. The popular tourist resort of Palu was also severely affected by the twin disaster.

Authorities expect the death toll to dramatically increase due to shortages of medicine and rescue equipment. Rescue workers have already begun to complain of medicine shortages and a lack of the necessary equipment to reach survivors trapped in collapsed buildings.

Many Indonesians are also criticizing the early lifting of the tsunami warning, arguing that the disaster could have been mitigated had the alarm continued for a longer period of time.

In an interview with DW, tsunami researcher Widjo Kongko agrees that the Agency for Meteorology, Climatology and Geophysics should not have called off the early alert for tsunami soon after the first quake.

DW: It was not the first time that an earthquake and tsunami have struck the area. Why, then, the authorities were not better prepared?

Widjo Kongko: The natural disaster law was only introduced in the country after the 2016 earthquake in Aceh.

Also, Indonesians tend to get complacent about these disasters, as they happen frequently.

Since 1900, three tsunamis have hit Donggala and Palu cities. After studying them, researchers have presented their recommendations on how to deal with such disasters to the government.

We have urged the government, especially the Agency for Meteorology, Climatology and Geophysics and the National Disaster Management Authority to work with other institutions so that Indonesia can improve its disaster management and disaster prevention mechanisms.

We need to improve our early warning system for disasters. Indonesia has only one earthquake sensor in Mamuju, which is quite far from Donggala and Palu. There are many other areas of disaster management that need improvement.

What can the government do on the technological front?

Researchers have published numerous studies and reports about earthquakes in Indonesia. We now know that there are 250 fault lines in the country; previously only 80 fault lines had been identified.

There are still many aspects that require more research. For instance, I suggest that Indonesia needs earthquake sensors not only on land but also on the seabed. We once installed sea sensors but faced the risk of vandalism. But we can use other mechanisms in the future, such as fiber optics, which are safer. The sea sensors need to be integrated into a centralized early warning system, so that whenever there is an earthquake with a tsunami potential, all regions could be alerted simultaneously.

Why did Indonesian authorities call off the tsunami alert after the earthquake in Palu?

According to my research, the tsunami should have reached the shores of Donggala and Palu in five to ten minutes and to Mamuju in 30 to 35 minutes after the quake. Because the main quake didn't trigger the tsunami, the early warning alert was called off.

The first quake created a fracture, which, after huge aftershocks, caused a landslide that triggered the tsunami. This analysis needs further examination, but I can safely say the tsunami alert was lifted too soon. It should have continued for at least an hour because there was another tsunami source.

Widjo Kongko is tsunami researcher at the Agency for the Indonesian Assessment and Application of Technology.

The interview was conducted by Yusuf Pamuncak. It has been edited for clarity.