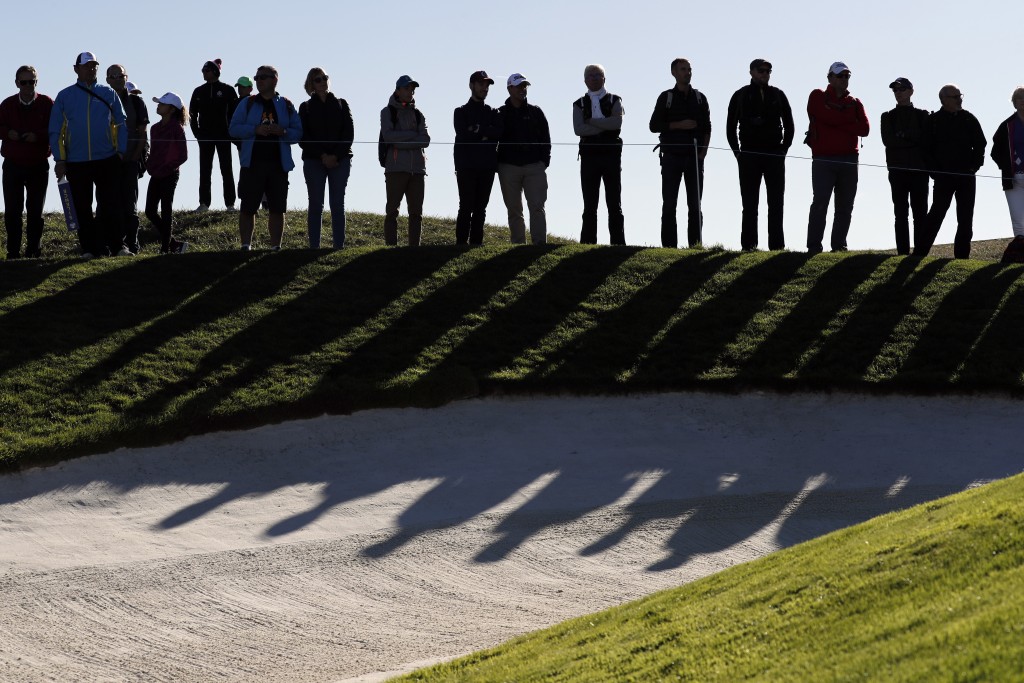 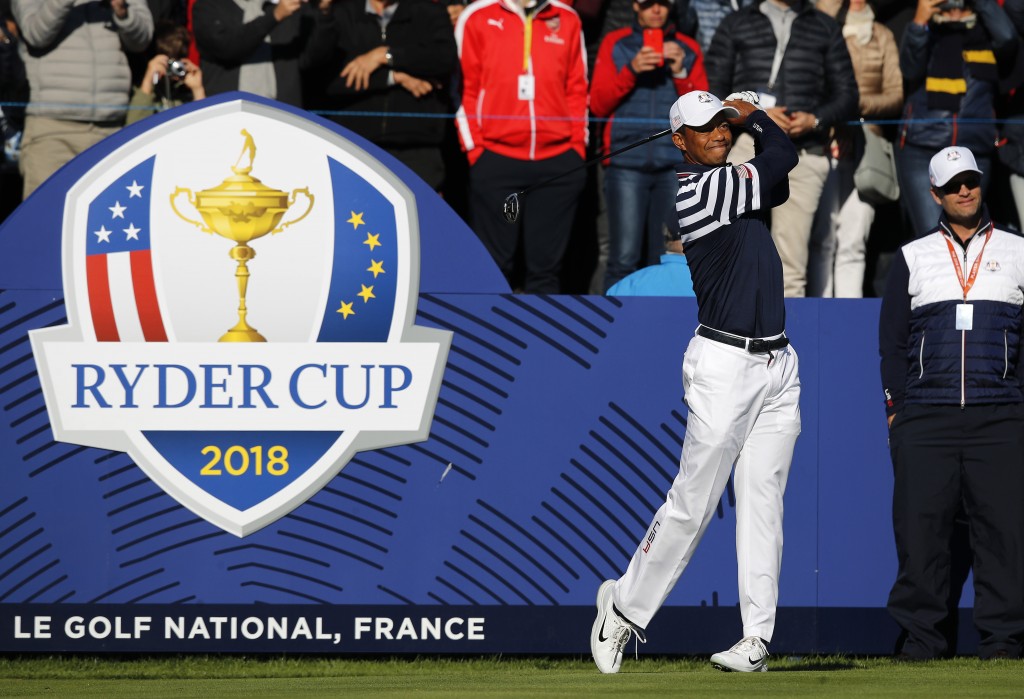 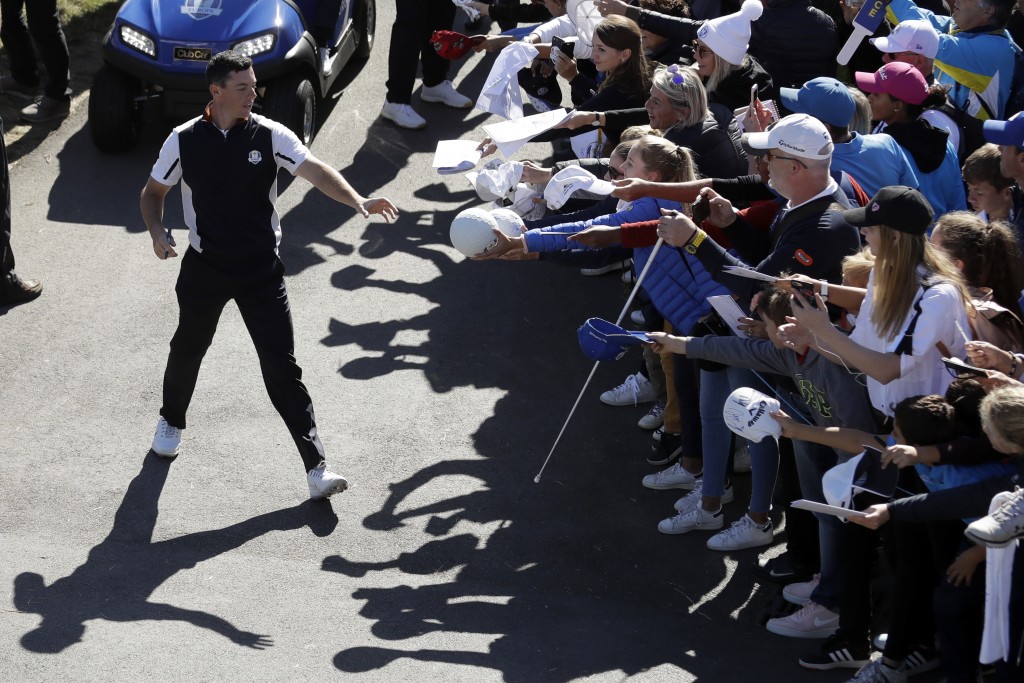 For one weekend every two years, many people in Britain become big fans of Europe — regardless of how they voted in the Brexit referendum in 2016. Their support doesn't have anything to do politics or Britain's departure from the European Union in March, however. It's just about golf and one of the biggest rivalries in sports.

The chant, which sounds more like Yooooo-Rup!, will be heard around Britain and the rest of Europe starting Friday when the continent's best players take on Tiger Woods and the American team in the Ryder Cup, golf's biggest team event.

Many of the loudest fans at Le Golf National, a club outside Paris, will likely come from England, Scotland, Northern Ireland and Wales.

"It's absolutely massive to us, as golf fans and a golfing family," Lee Perch, a 34-year-old Europe fan from Harlech, Wales, said next to the practice putting green while wearing a blue-sleeved shirt with a blue EU flag over the left breast.

At least in terms of the Ryder Cup, there's a deep acknowledgement in Britain of the value of Europe. Without players from the continent, it's doubtful the Ryder Cup would still be such a major event.

"The British love affair of Team Europe is unique," said Mark Thompson, managing director of global sponsorship management firm SponServe. "Beset by constant talk of Brexit, the Ryder Cup and Europe's rivalry with the U.S. is seemingly one of the only galvanizing events we're likely to see across the continent in the foreseeable future."

At its start in 1927, the competition was between Britain and the United States. After the first four matches were shared, the Ryder Cup became increasingly one-sided, with the Americans winning the subsequent five. In an attempt to even things up, the British team was expanded in 1953 to include golfers from Ireland.

Despite one surprise victory for Britain and Ireland in 1957 at the Lindrick Golf Club in northern England, and the infamous 1969 Ryder Cup when Jack Nicklaus conceded a putt to Tony Jacklin that meant the competition was halved, the event remained a procession for American golfers.

Interest was waning, both on and off the course.

During the 1977 Ryder Cup at Royal Lytham & St. Annes, another one-sided affair, Nicklaus argued that radical change was required if the competition was to have a future. The solution was to expand the team further and include players from around Europe. After all, in 1973 Britain and Ireland had joined what was then known as the European Economic Community.

It was a change that revitalized the Ryder Cup.

"When Great Britain and Ireland became Europe, we became competitive. And with Seve (Ballesteros), (Nick) Faldo, (Bernhard) Langer, (Sandy) Lyle and (Ian) Woosnam, started winning, home and away," said Ken Schofield, who ran the European Tour for 30 years until 2004. "That has made it game on, and we are where we are."

The change in format did not immediately bring about a change in results, however. A Europe team that included British Open champion Ballesteros got trounced 17-11 at The Greenbrier in West Virginia in 1979. Another big loss followed at Walton Heath in southern England two years later — this time by an even wider margin of 18 1/2-9 1/2.

But then 1983 happened. Europe nearly pulled off an incredible victory against one of the strongest U.S. teams of them all, captained by Nicklaus himself, in Palm Beach Gardens, Florida. Although the "Golden Bear" came within a point of losing, he was ecstatic that the Ryder Cup was — finally — a contest.

Europe won two years later at The Belfry in central England and has gotten the better of the United States in a majority of matches since, with the British contingent complemented by players from Denmark, France, Germany, Italy, Sweden and Spain.

Nielsen Sports, a specialist in sports data, has found that interest in the event has surged over the past four years and that Britain is the market with the biggest proportion of Ryder Cup fans, with 20 percent of people claiming to be interested or very interested in the competition.

Whatever happens with Brexit, it's unlikely the chants of Eu-Rope! will diminish, even though Europe will continue to play under the EU flag.

"Coming out here, it's the first time we've been and I don't want it to be the last," Perch said. "It's important it carries on."