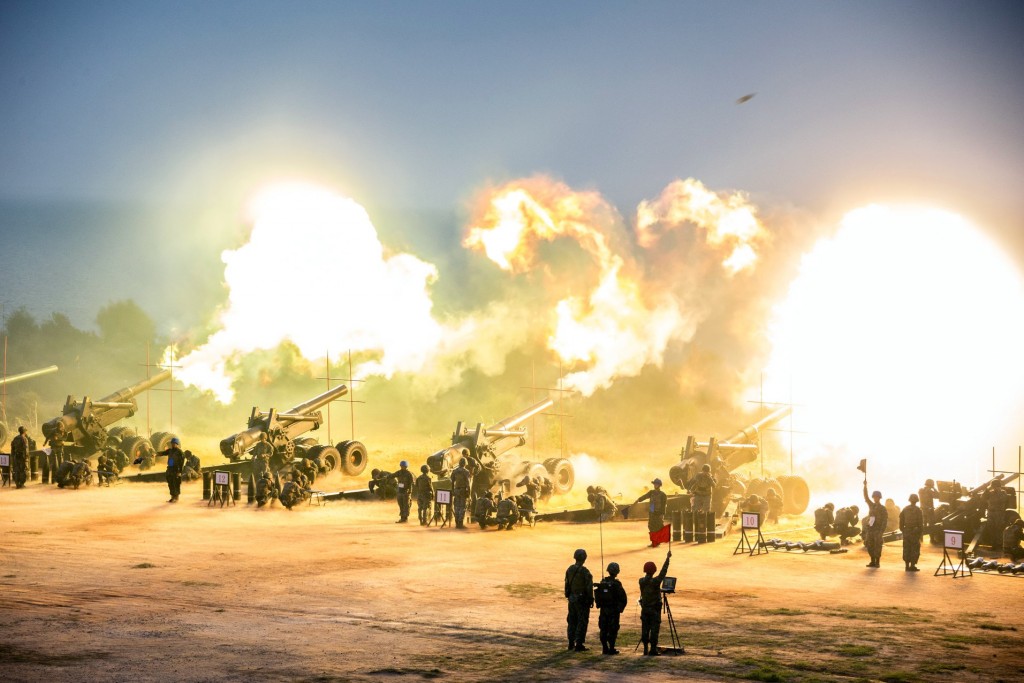 In an article posted yesterday (Sept. 25), Foreign Policy drew from a research paper written by Michael Beckley, a political scientist at Tufts University, and the book "The Chinese Invasion Threat: Taiwan’s Defense and American Strategy in Asia," by Ian Easton, a fellow at the Project 2049 Institute. The magazine concludes that based on this research, the worst nightmare for Chinese commanders is being forced to fight a Taiwanese "enemy that is better trained, better motivated, and better prepared for the rigors of warfare than troops the PLA could throw against them."

The article first presents the rosy, best-case scenario for the PLA in which massive waves of missile strikes take out all strategic positions and assassinations of key political leaders lays the groundwork for the smooth execution of the largest amphibious invasion seen in the history of the world. However, the biggest flaw in this plan is that it would depend entirely on the element of surprise and a glacially slow response by the U.S. and Japan, which in the modern digital communication age is highly unlikely.

As Easton had told Taiwan News in 2017, leaders of Taiwan, the U.S. and Japan would actually already see many telltale signs that an invasion was in the works 60 days beforehand. When it reaches 30 days before the war starts, "it would become very clear with every hour that passed that China's intention was to do a minimal-warning invasion. Of course, the Chinese would engage in lots of acts of deception, but there's no way they could trick Taiwanese intelligence and American intelligence," said Easton.

This amount of advanced notice would give Taiwan plenty of time shift command and control centers to hardened underground mountain tunnels, hunt for enemy agents, shift naval vessels away from vulnerable ports, arm Taiwan's 2.5 million reservists, spread out and conceal army units, and cover the Taiwan Strait with mines.

Another major enemy of China is Taiwan's dearth of large beaches that are friendly for amphibious landings. There are only 13 such beaches and all have already been prepped for such an eventuality, and reservists could be called up to help set up a hellish network of what Easton called "razor wire nets, hook boards, skin-peeling planks, barbed wire fences, wire obstacles, spike strips, landmines, anti-tank barrier walls, anti-tank obstacles … bamboo spikes, felled trees, truck shipping containers, and junkyard cars."

Another natural enemy China would face is the treacherous Taiwan Strait itself, which is notoriously plagued by gale force winds, typhoons, heavy fog and plum rains for much of the year. The Taiwan Strait actually only has two four-week windows in April or October, again, taking out the element of surprise and given the fickle nature of weather in the region, quite possibly delaying or hindering an invasion.

Pull the plug on “world’s factory”

Given that Taiwanese businesses employ legions of Chinese workers, a sudden shutdown of all the factories before an invasion and severing of money transfers would cause a significant economic disruption that could sew discord and panic among the civilian population.

Something else that Chinese propagandists and PLA planners have given short shrift to is the possibility that Taiwanese agents could also carry out assassinations of political and military leaders and sabotage of southern China's transportation network and power grid. Taiwan has also been steadily building up an arsenal of long-range cruise missiles such as the Hsiung Feng IIE (雄風二E, "Brave Wind IIE) surface-to-surface missile, with an estimated range of between 1,000 kilometers and 1,500 kilometers, making it capable of striking Hong Kong, Shanghai and provinces such as Fujian, Guangdong, and Zhejiang. These missiles can be used to great effect in areas where the PLA tries to marshal its forces before the invasion and once they set out to sea.

Taiwan also has been building up a stockpile of anti-ballistic missiles (ABM), such as the domestically-developed Tien Kung III (天弓導彈, Sky Bow), which can take out both incoming missiles and aircraft.

The invading armada of Chinese vessels would not only face these missiles, but also missiles from Taiwan's fighter jets, which can take shelter in Taiwan's network of bunkers built deep inside of Taiwan's mountains and can use highways as landing strips. Vessels would fall victim from torpedoes from its reserve force of submarines and Tuo Chiang-class corvettes, while still more would be made to stop dead in the water due to the countless mines littering the strait.

Easton also describes a "wall of flame" that could be used to menace Chinese warships by setting underground oil pipelines ablaze.

Meanwhile, China's Air Force is unlikely to have success taking out Taiwan's mobile missiles and artillery, as countless decoys would be deployed throughout the mountainous country to confuse their targeting. The article cites the low success rate in targeting mobile missile launchers by the U.S.-led coalition during the 1990 to 1991 Gulf War and the 78-day bombing campaign by NATO against Serbian mobile missile launchers.

The article aptly points out that "costs favor the defense." Just as the Chinese military has been using lower cost weapons such as the Dong-Feng 21D "carrier killer" to potentially fend off American supercarriers, so too can Taiwanese forces use the supersonic Hisung Feng IIE to seriously threaten China's Liaonning aircraft carrier.

To strengthen its asymmetric fighting capability, Taiwan's defense budget is boosting funding for building a new drone fleet, including the "Tengyun drone," which can fire U.S.-made AGM-114 Hellfire missiles.