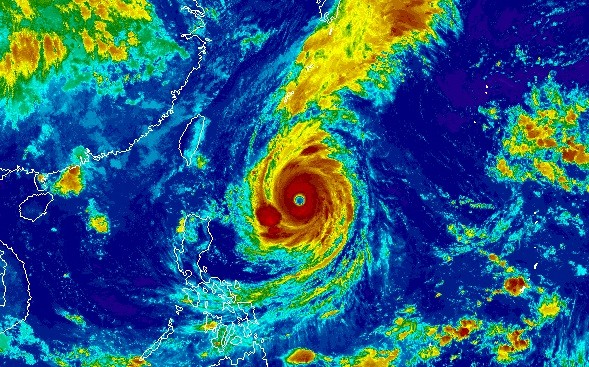 TAIPEI (Taiwan News) -- Super Typhoon Trami, the 24th tropical storm of the year, will come closest to Taiwan on Sept. 28 and 29, and though a direct impact is unlikely, the periphery of the storm will bring heavy rain to Taiwan, according to the Central Weather Bureau (CWB).

As of 2 a.m. this morning, Trami was located 910 kilometers east-southeast of Eluanbi, moving "slowly" northwest and packing maximum sustained winds of 190 kilometers per hour with gusts of 234 kilometers per hour, making it equivalent to a category 5 Atlantic hurricane. Current models show the future path of Trami bound for the waters just north of Taiwan and the probability of a direct impact has diminished.

As for the weather today, CWB forecaster Kuan Hsin-ping (官欣平) said rain is still likely in areas north of Taoyuan and in Yilan due to the effects of northeasterly winds, while scattered showers are possible in Hsinchu, Miaoli, Hualien and Taitung. Skies will be cloudy in central and southern Taiwan and thunderstorms are likely in the afternoon in southern Taiwan and mountainous areas of central Taiwan.

The CWB has issued a heavy rain advisory for New Taipei City, Taipei City, Keelung City, Yilan County, Hualien County and Taitung County, while a strong wind advisory is in place for all of Taiwan. Kuan reminded the public to beware of large waves in northern and eastern Taiwan today (including Green Island and Orchid island) and the Hengchun Peninsula. In addition, due to strong northeasterly winds, big waves and strong wind gusts of level 9 and 10 have been seen in areas north of Tainan, eastern Taiwan (including Green Island and Orchid Island), the Hengchun Peninsula, Penghu, Kinmen, Matsu and open areas along the coasts.

As for temperatures, the morning will be slightly cool with lows ranging between 24 to 25 degrees Celsius, while rising to 28 to 30 degrees during the day in eastern and northern Taiwan. Central and southern Taiwan will be muggier, with highs reaching 32 to 33 degrees.