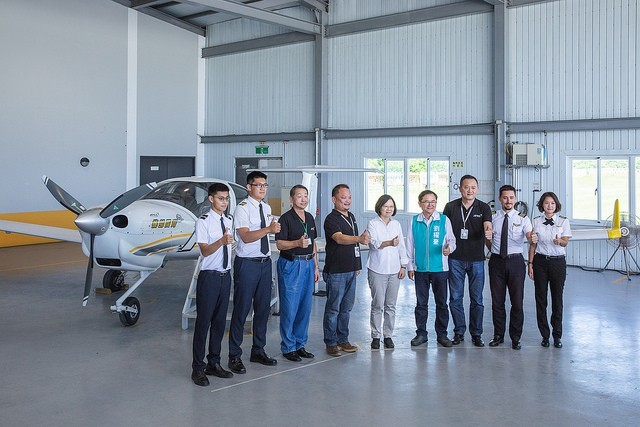 TAIPEI (Taiwan News) – Taiwan President Tsai Ing-wen (蔡英文) visited the APEX flight academy in Taitung County (臺東縣), and expressed her hope that the academy can continue to grow into a place where more dreams take off, on Sept. 24.

Tsai said that Taiwan has invested heavily into the aerospace industry, and is a key industry of the government's strategy of industrial transformation and upgrading, according to the Presidential Office.

Founded by Wilson Kao (高健祐) in 2014, APEX is the only professional flight school in Taiwan. APEX has partnered with Taiwan's China Airlines to upskill further develop their existing pilots and flight crew.

APEX is based at Taitung Airport, and is located in a unique flying environment, best suited to train pilots, according to Tsai.

Tsai said that there was support within the Legislative Yuan (立法院) to expand pilot training as part of the New Southbound Policy, and to further expand linkages of Taiwan's aerospace industry.

Over the past two years, Taiwan has targeted the aerospace industry as part of its national defense strategy, which champions Taiwanese research and development, and manufacturing. The strategy has led to a decline in aerospace-related orders from China, said Tsai.