A 33 year old man enjoying an outdoor BBQ with his colleagues was shot in his genitals by an air-powered pistol at approximately 9:30 p.m. by a man in a motorcycle helmet and facemask.

The suspect reportedly joined the BBQ gathering surreptitiously, and was wandering around the area for around ten minutes before he began firing the air gun, reports Apple Daily.

According to China Times, the suspect fired four shots at the BBQ gathering. The first was aimed at the business where the BBQ took place. The gunshot commanded the attention of those gathered, who attempted to confront the man. He then fired two more shots towards the group, while he hopped aboard his scooter.

The last shot from the gunman was fired from the scooter as he fled. The pellet struck the victim between his thighs, causing a very painful, but not a life threatening wound to his genitals.

An ambulance was immediately called by the man's friends. The victim was reportedly still conscious when he was loaded into the ambulance. He was treated at National Taiwan University Hospital.

CNA reports that the incident involved a debt dispute between the victim and the attacker. The attacker’s identity is known to police, and they are currently seeking his arrest. Scene of the shooting (CNA Image) 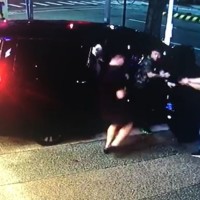 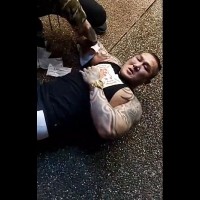 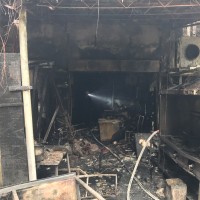