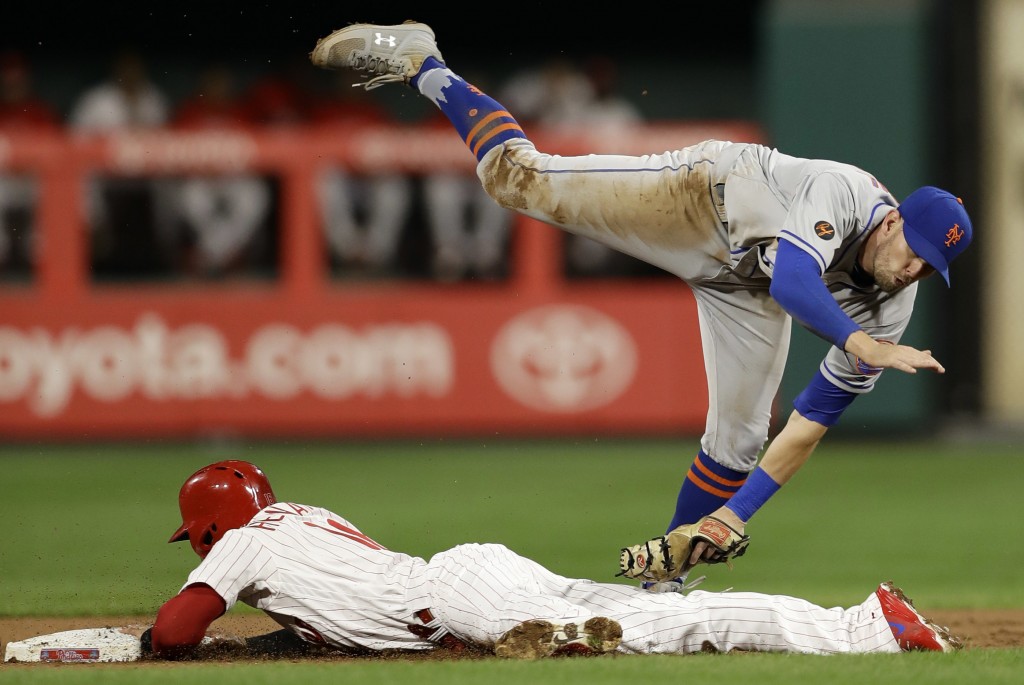 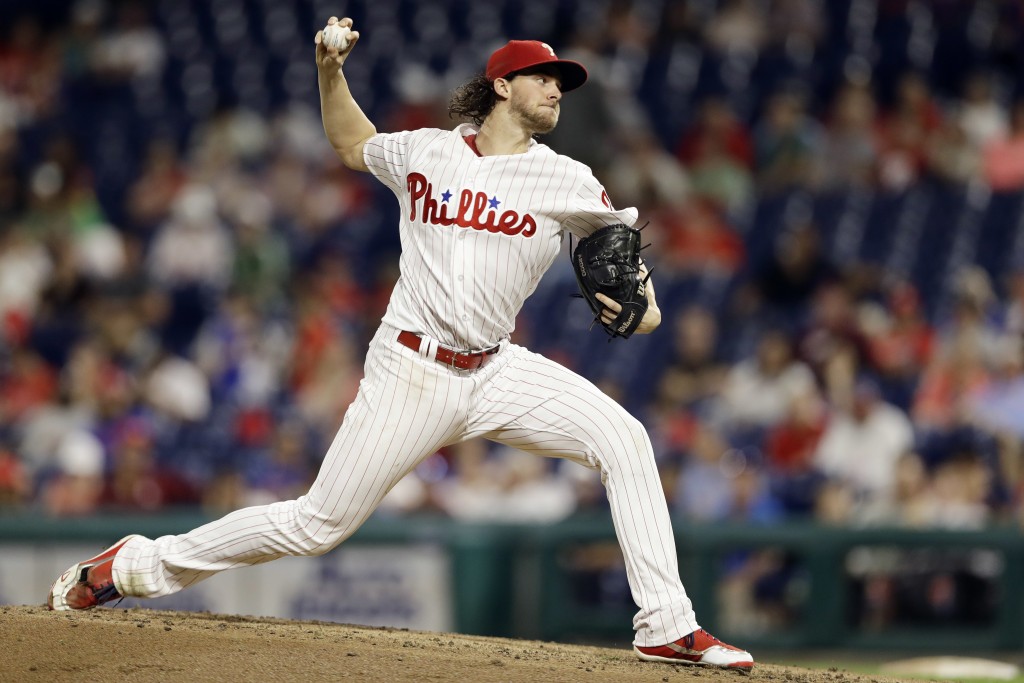 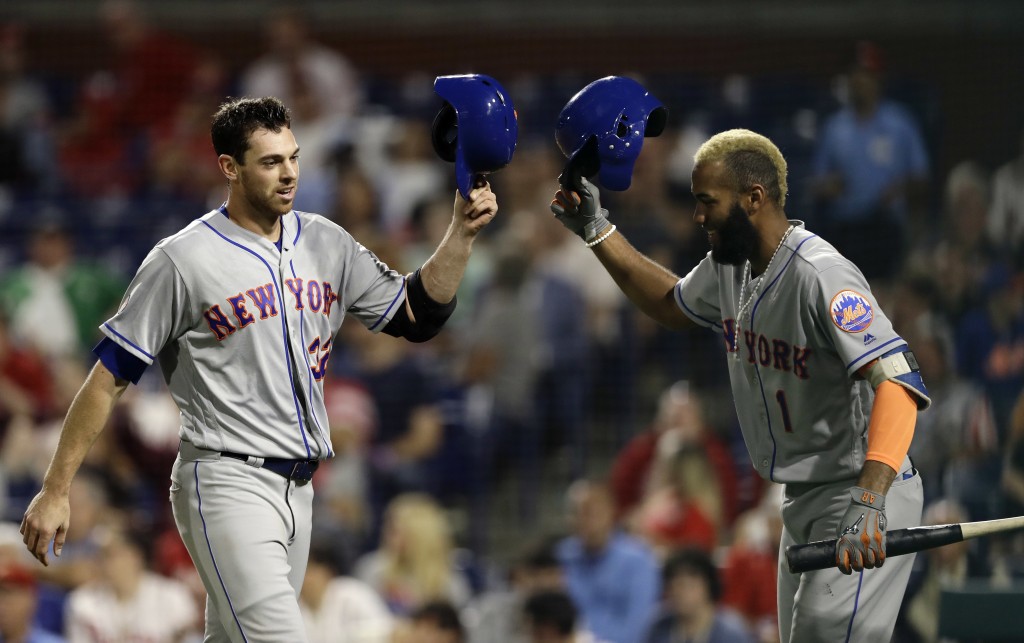 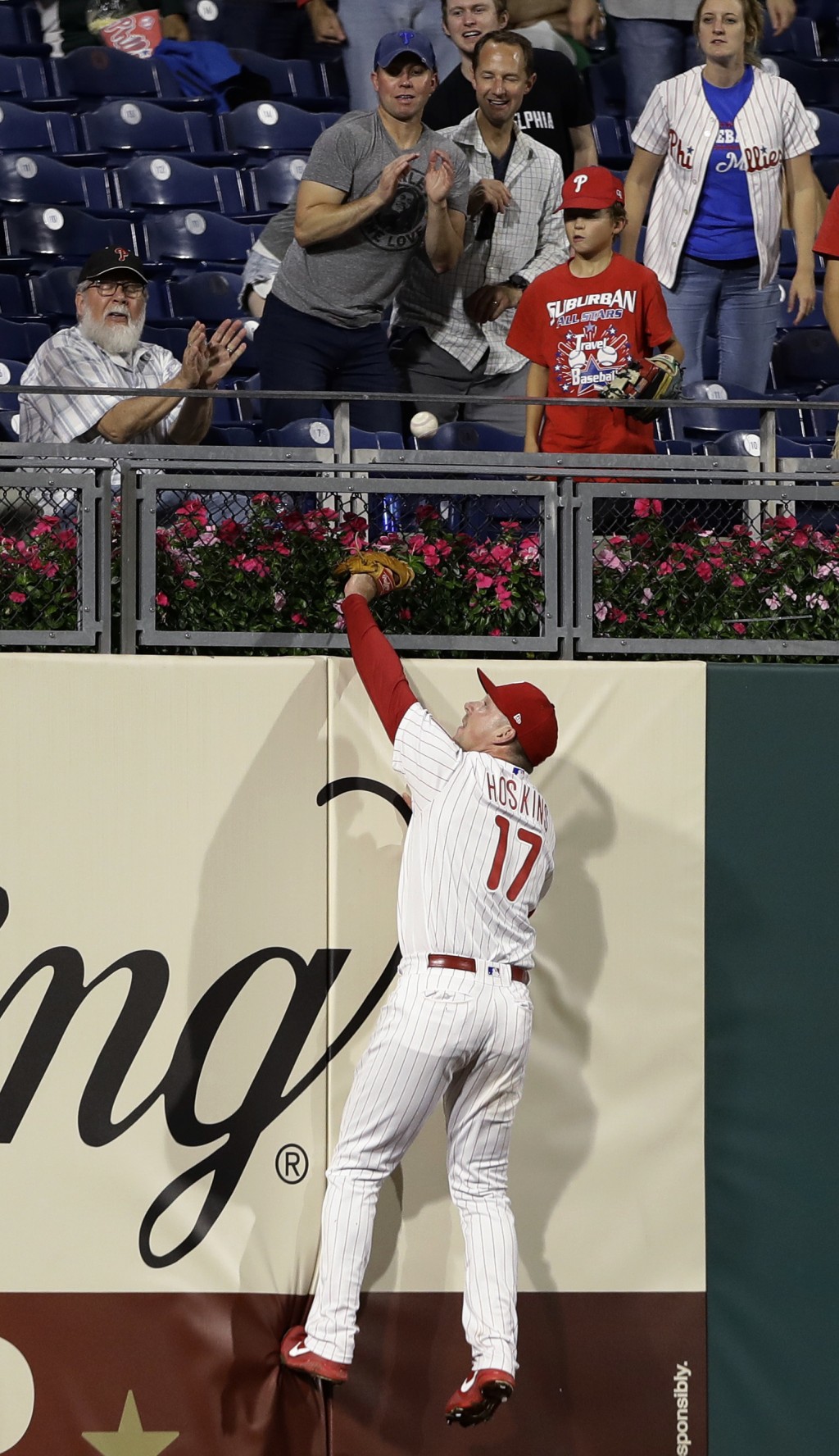 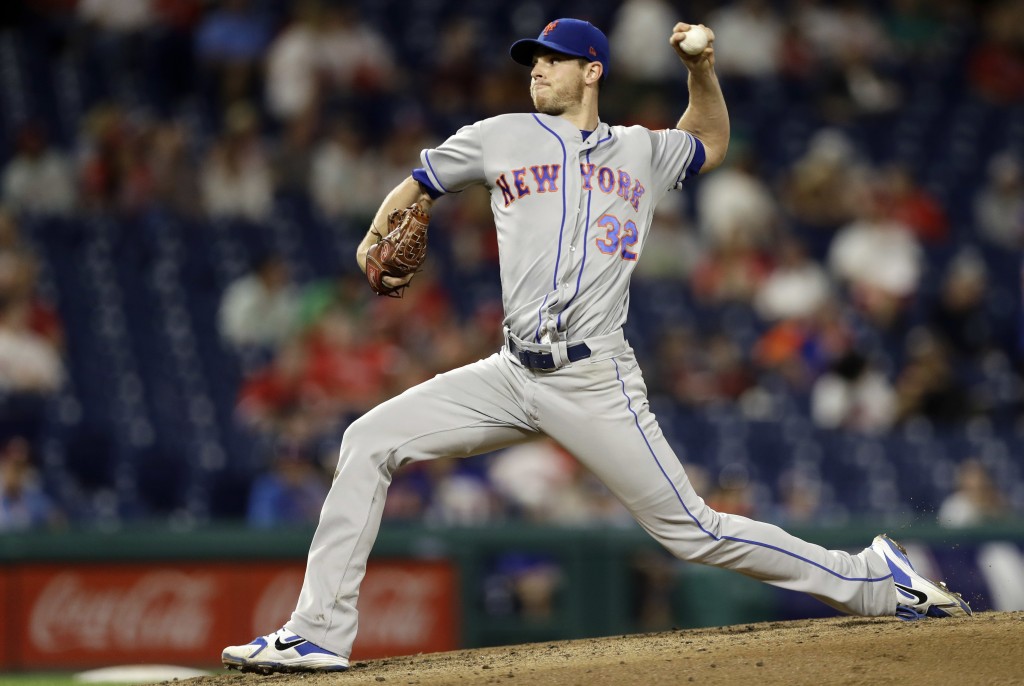 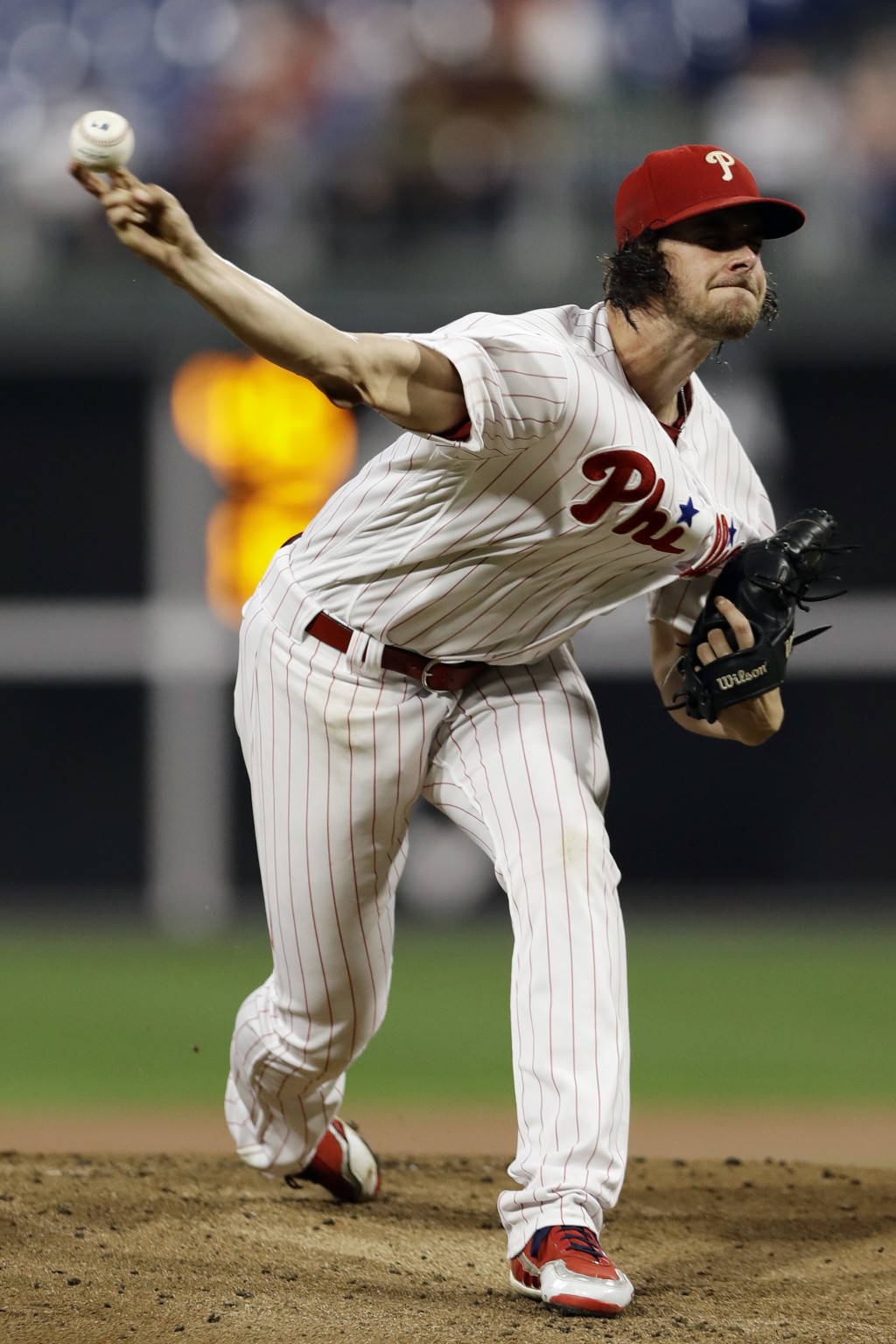 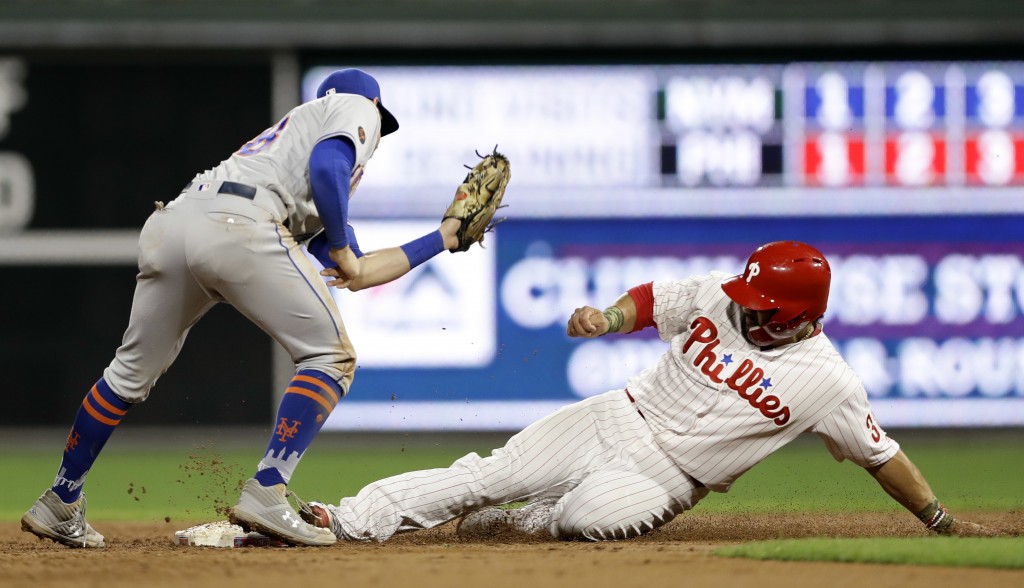 PHILADELPHIA (AP) — Jorge Alfaro hit a go-ahead, three-run homer in the sixth inning and the Philadelphia Phillies rallied past the New York Mets 5-2 on Tuesday night to boost their faint playoff hopes.

Philadelphia overcame an uneven outing from ace Aaron Nola and a home run by starter Steven Matz that made him the third Mets pitcher to homer in consecutive appearances.

The Phillies, who began the night trailing first-place Atlanta by 6½ games in the NL East, won for only the third time in 10 games. The Braves were hosting St. Louis.

Wilson Ramos and Justin Bour delivered pinch-hit RBI hits in a five-run sixth before Alfaro drilled a curveball from Drew Smith (1-1) to left-center for his 10th homer.

And with that, Matz's eventful performance was wasted by the Mets.

The left-hander had zero homers in his first 70 major league games before going deep last Thursday against Miami. He entered Tuesday hitting .093 (4 for 43) this season and .140 in his career, but lifted a fastball to left against Nola in the third that just cleared the wall and withstood a video review to put New York ahead 1-0.

The other Mets pitchers to homer in back-to-back outings were Hall of Famer Tom Seaver (1972) and Ron Darling (1989).

Matz worked around five walks and gave up two hits in five scoreless innings. He also snagged a line drive between his legs to start a double play, before the bullpen faltered and the Mets' bats went silent.

Pat Neshek (3-1) relieved Nola and got the final out of the sixth. Seranthony Dominguez, Tommy Hunter and Hector Neris each pitched a scoreless inning as the Phillies improved to 7-11 against the Mets this season.

Neris earned his 11th save.

Nola allowed two runs and six hits with nine strikeouts and two walks in 5 2/3 innings as his ERA climbed to 2.44. He's given up eight home runs in September after allowing seven over the first five months of the season.

Mets: Jay Bruce started in right field, the fourth straight game he has not played first base. But manager Mickey Callaway said Bruce's troublesome back is fine and he'll return to first soon.

Phillies: Alfaro stayed in after Jacob Rhame drilled him on the arm with a fastball in the eighth, his first plate appearance after his home run. . Ex-Mets INF Asdrubal Cabrera, who exited Monday's game early with a left calf strain, was unavailable along with 3B Maikel Franco (right shoulder). Manager Gabe Kapler put Scott Kingery at shortstop and J.P. Crawford at third.

The Mets were still mulling whether to shut down RHP Zack Wheeler, who has pitched nearly 100 more innings than last season. "The main things we want is him going into the offseason feeling good about the season and being totally healthy," Callaway said.

LHP Aaron Loup was activated off the disabled list, giving Philadelphia the September limit of 40 players. Kapler used 18 in the game.

Mets RHP Noah Syndergaard swiped the Phillie Phanatic's four-wheeler before the game and drove around the outfield as the mascot chased him on foot. . After dealing with real rats in the dugout in Boston last weekend, a long-tailed plastic rat was spotted in the Mets clubhouse before the game.