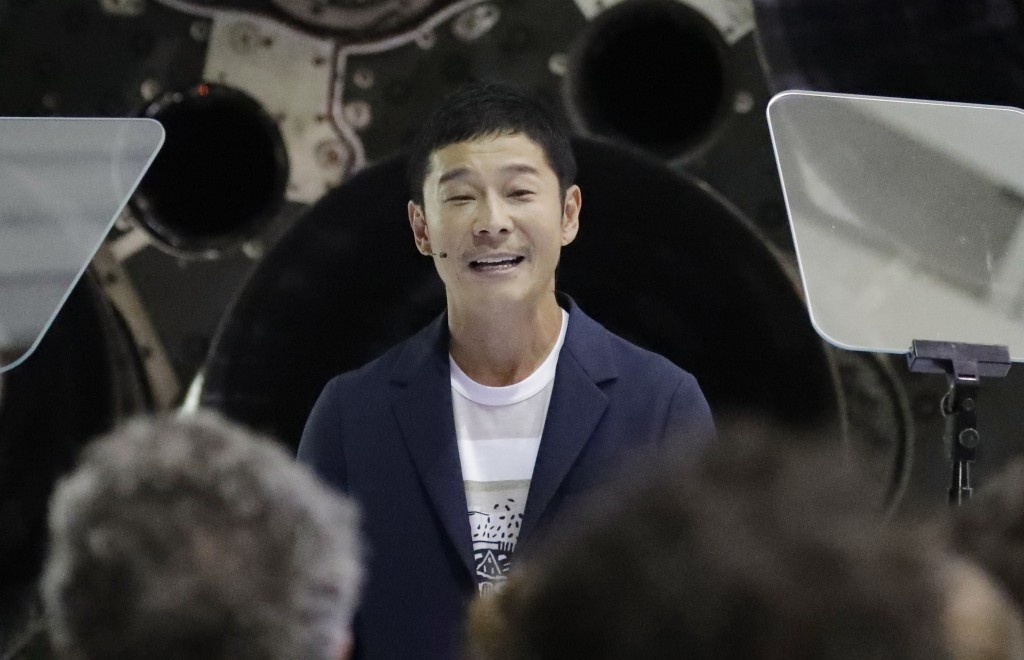 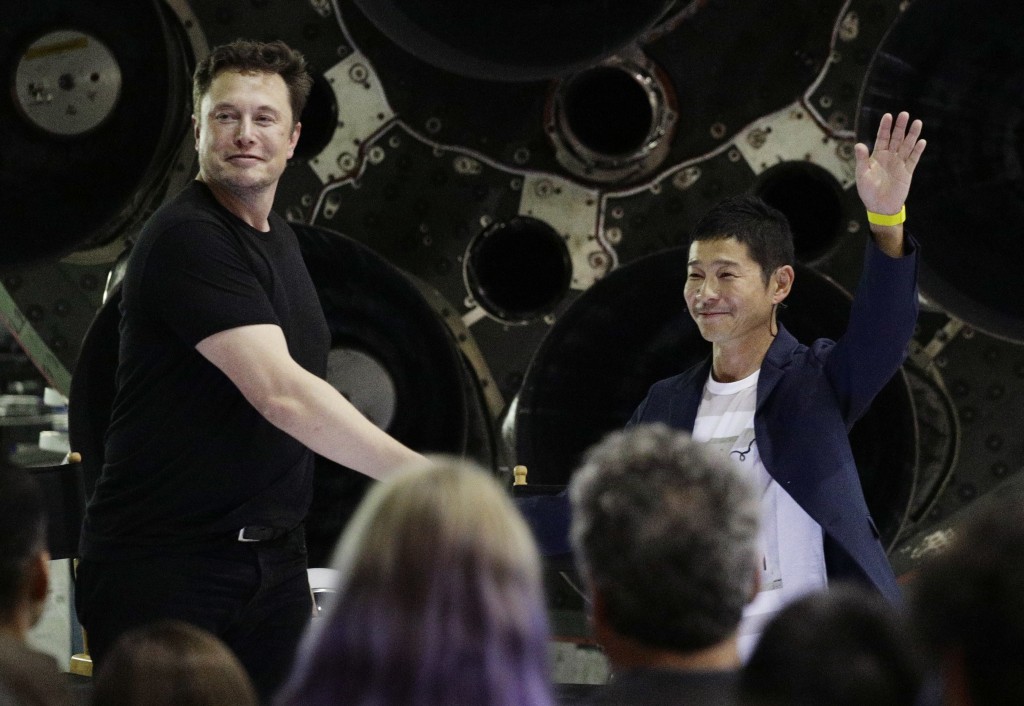 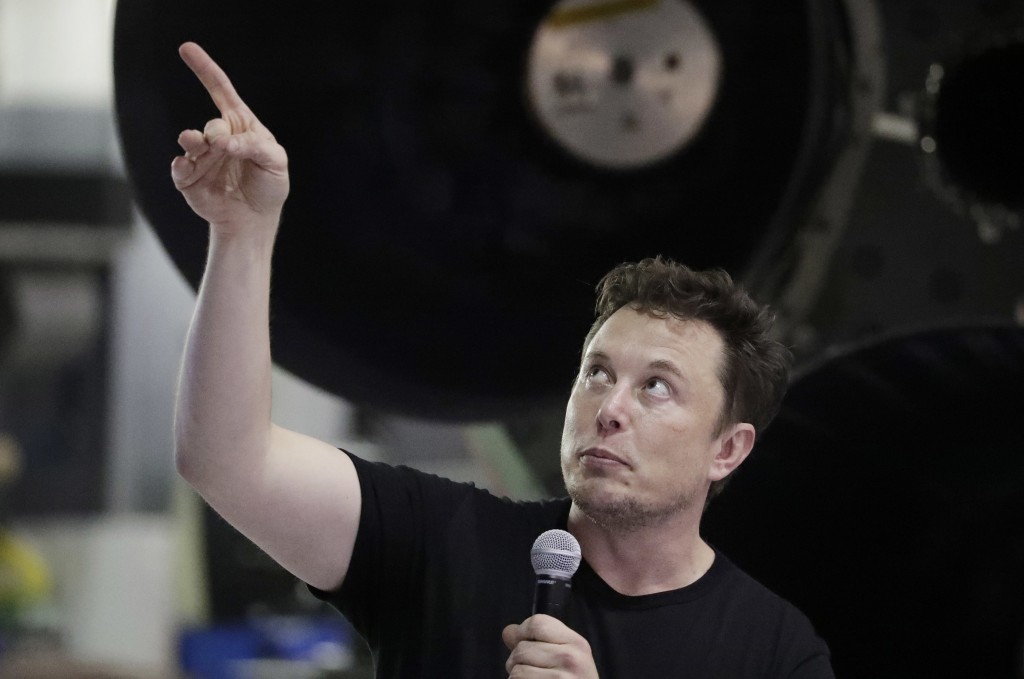 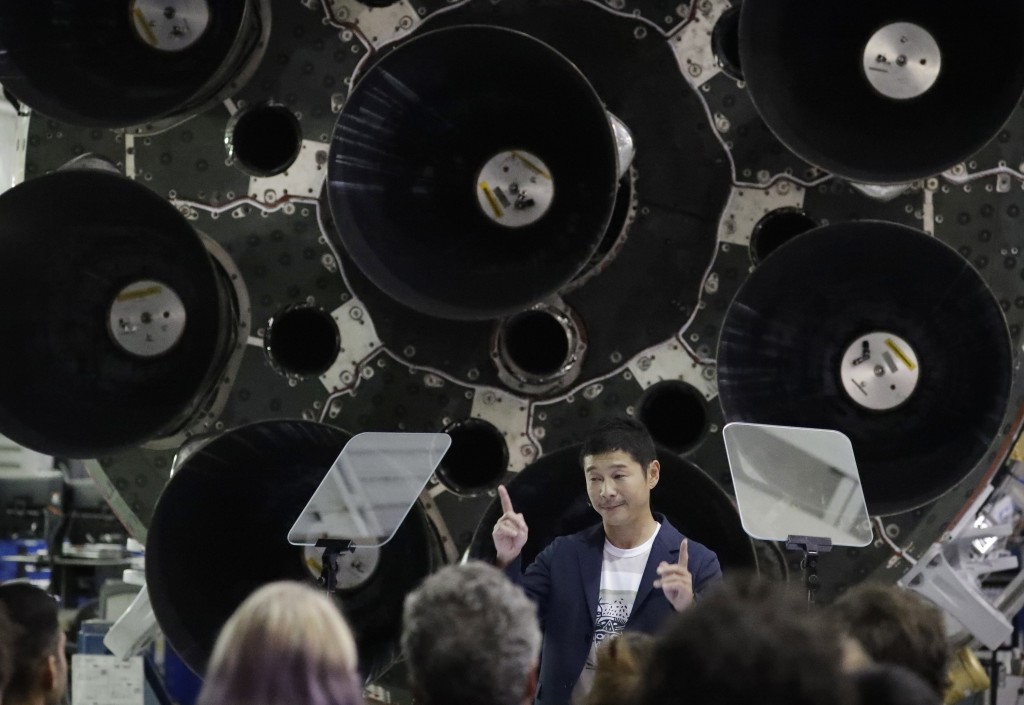 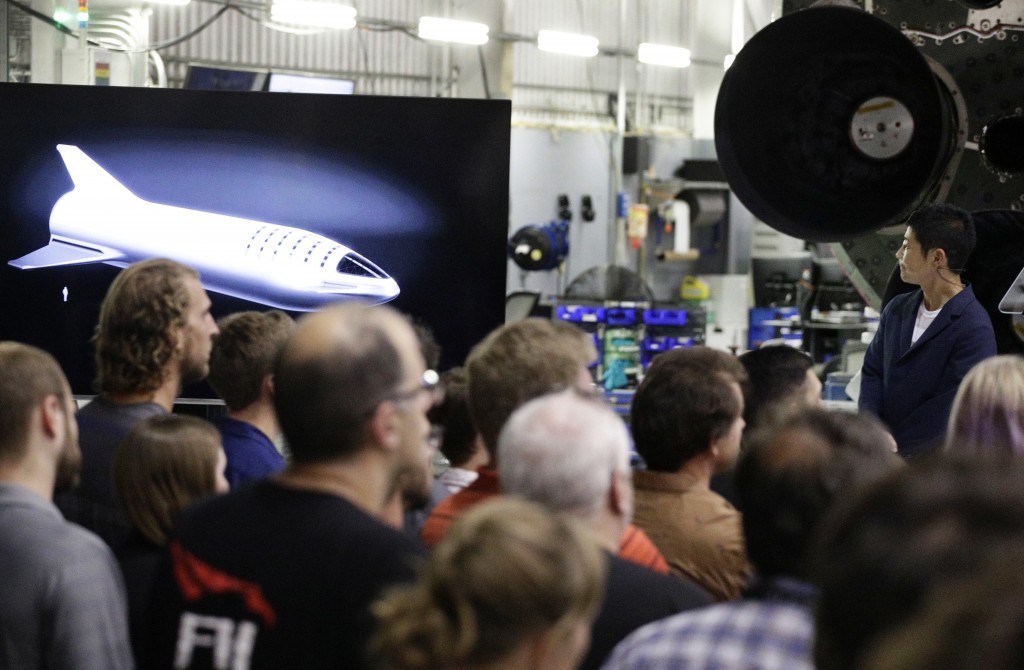 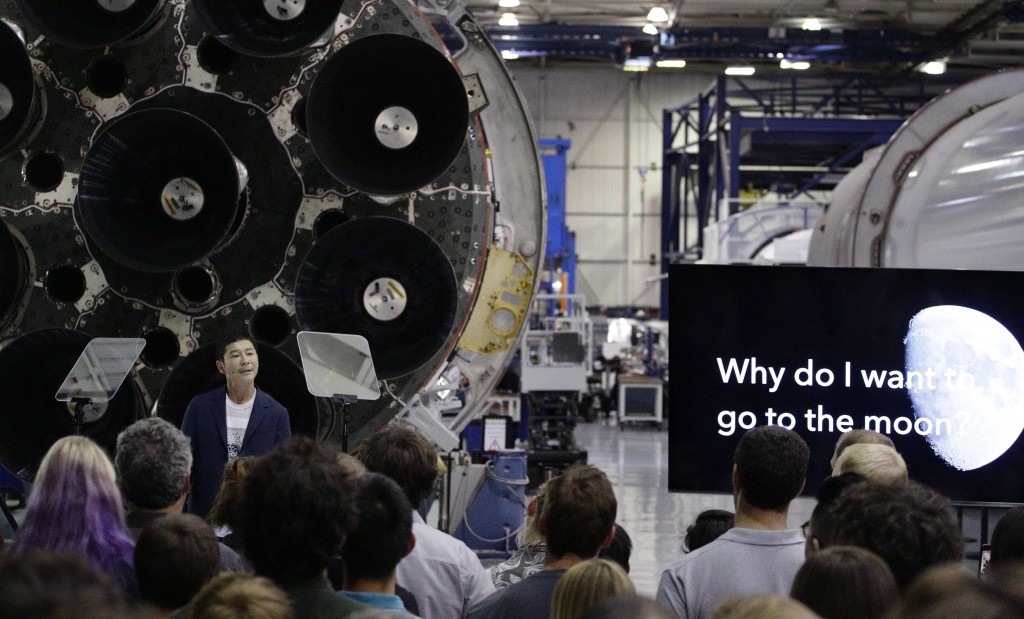 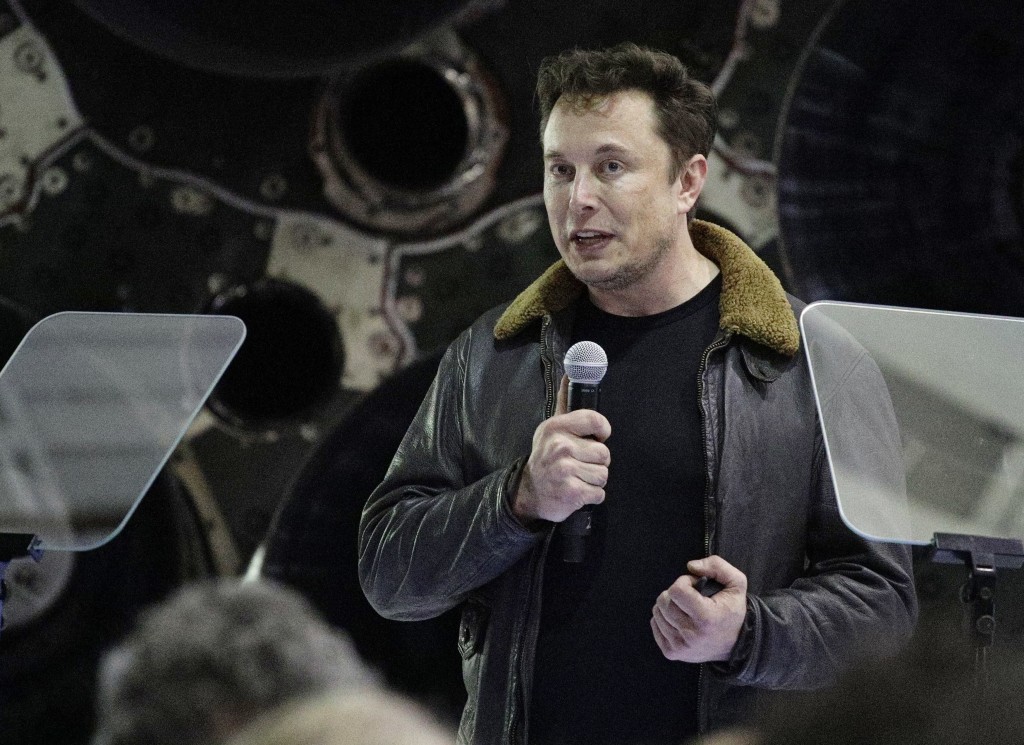 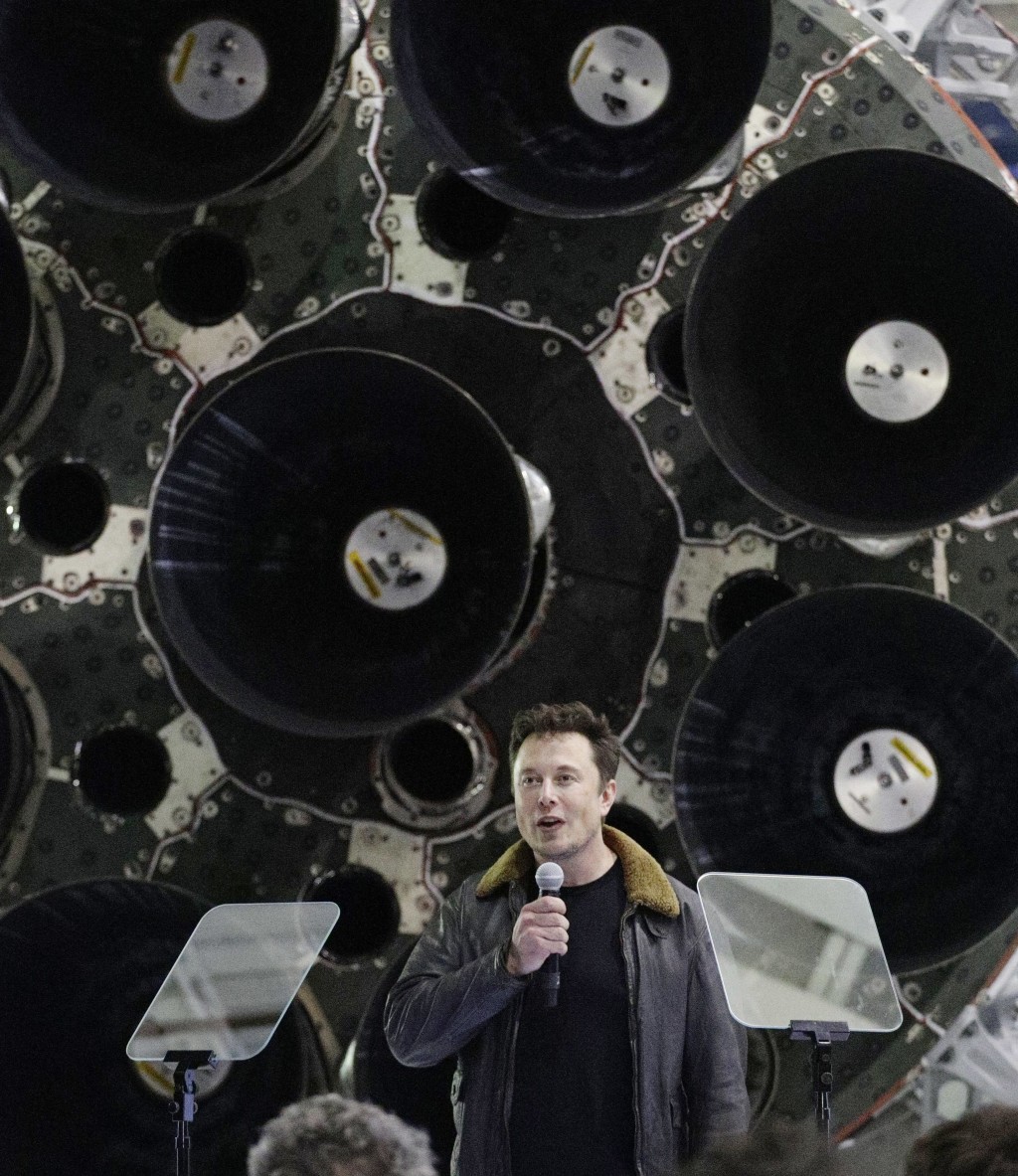 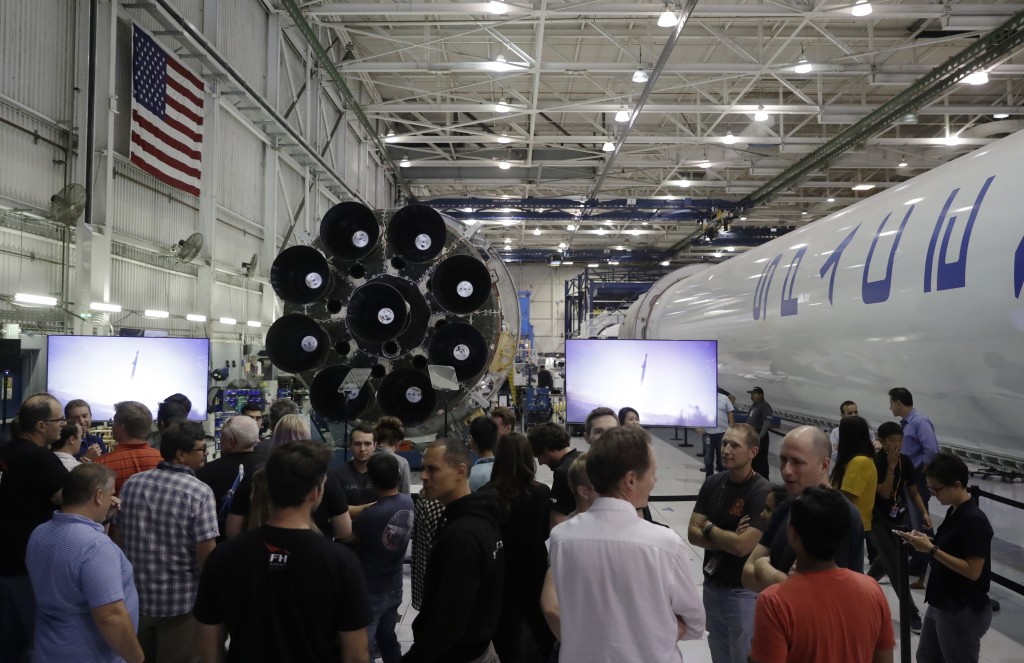 LOS ANGELES (AP) — After announcing that he'll take the first-ever commercial rocket trip around the moon, Yusaku Maezawa said he wants company for the weeklong journey. The Japanese billionaire said he plans to invite six to eight artists, architects, designers and other creative people to join him on board the SpaceX rocket "to inspire the dreamer in all of us."

The Big Falcon Rocket is scheduled to make the trip in 2023, SpaceX founder Elon Musk announced at an event Monday at its headquarters near Los Angeles.

Maezawa, 42, said he wants his guests for the lunar orbit "to see the moon up close, and the Earth in full view, and create work to reflect their experience."

Musk said the entrepreneur, founder of Japan's largest retail website and one the country's richest people, will pay "a lot of money" for the trip, but declined to disclose the exact amount. Maezawa came to SpaceX with the idea for the group flight, Musk said.

"I did not want to have such a fantastic experience by myself," said Maezawa, wearing a blue sports jacket over a white T-shirt printed with a work by the late painter Jean-Michel Basquiat. He said he often mused about what artists like Basquiat or Andy Warhol might have come up with if they'd traveled into space.

"I wish to create amazing works of art for humankind," Maezawa said.

Maezawa didn't immediately say who will be on his guest list for the spaceflight, but in response to a question from a reporter he said he'd consider inviting Musk.

"Maybe we'll both be on it," Musk said with a smile.

Musk said the BFR is still in development and will make several unmanned test launches before it takes on passengers. The reusable 118-meter (387-foot) rocket will have its own dedicated passenger ship and its development is expected to cost about $5 billion, Musk said.

The mission will not involve a lunar landing.

The average distance from Earth to the moon is about 237,685 miles (382,500 kilometers). Astronauts last visited the moon during NASA's Apollo program. Twenty-four men flew to the moon from 1968 through 1972 and half of them made it to the lunar surface.

NASA is planning its own lunar flyby with a crew around 2023. The space agency also aims to build a staffed gateway near the moon during the 2020s. The outpost would serve as a stepping-off point for the lunar surface, Mars and points beyond.

Maezawa, a former musician, founded the retail firm Start Today in 1998 and built it into one of Japan's most successful companies. In 2012 he started the Tokyo-based Contemporary Art Foundation to support young artists. He made headlines in 2016 when he paid more than $57 million at auction for an untitled work by Basquiat. A year later he paid more than $110 million auction for another piece by the same artist.

Musk outlined a somewhat different SpaceX lunar mission last year. He said then that two people who know each other approached the company about a weeklong flight to the moon and back. Musk did not name the clients last year or say how much they would pay.

That original mission would have used a Falcon Heavy rocket — the most powerful rocket flying today — and a Dragon crew capsule similar to the one NASA astronauts will use to fly to the International Space Station as early as next year.

The era of space tourism began in 2001 when California businessman Dennis Tito paid for a journey on a Russian rocket to the International Space Station. The trip was organized by the Virginia-based company Space Adventures, which has since sent several more paying customers on spaceflights.

SpaceX already has a long list of firsts, with its sights ultimately set on Mars. It became the first private company to launch a spacecraft into orbit and safely return it to Earth in 2010, and the first commercial enterprise to fly to the space station in 2012 on a supply mission.

Musk's successes have recently been overshadowed by his behavior and the struggles of his Tesla electric car company to deliver.

He recently criticized analysts during a Tesla earnings conference call, labeled a British diver in the recent Thai cave rescue drama as a pedophile, took a hit off an apparent marijuana-tobacco joint during a podcast interview, and tweeted that he had funding to take Tesla private but then announced the deal was off.

Two high executives announced departures from Tesla, and the diver sued Musk on Monday. Last month he told the New York Times he was overwhelmed by job stress.

The British diver, Vernon Unsworth, sued Musk for defamation on Monday and is seeking more than $75,000.

Musk and SpaceX engineers built a small submarine and shipped it to Thailand to help with the rescue. The device wasn't used and in the interview, Unsworth called it a "PR stunt" and said it wouldn't have worked to free the boys who were trapped in the flooded cave.