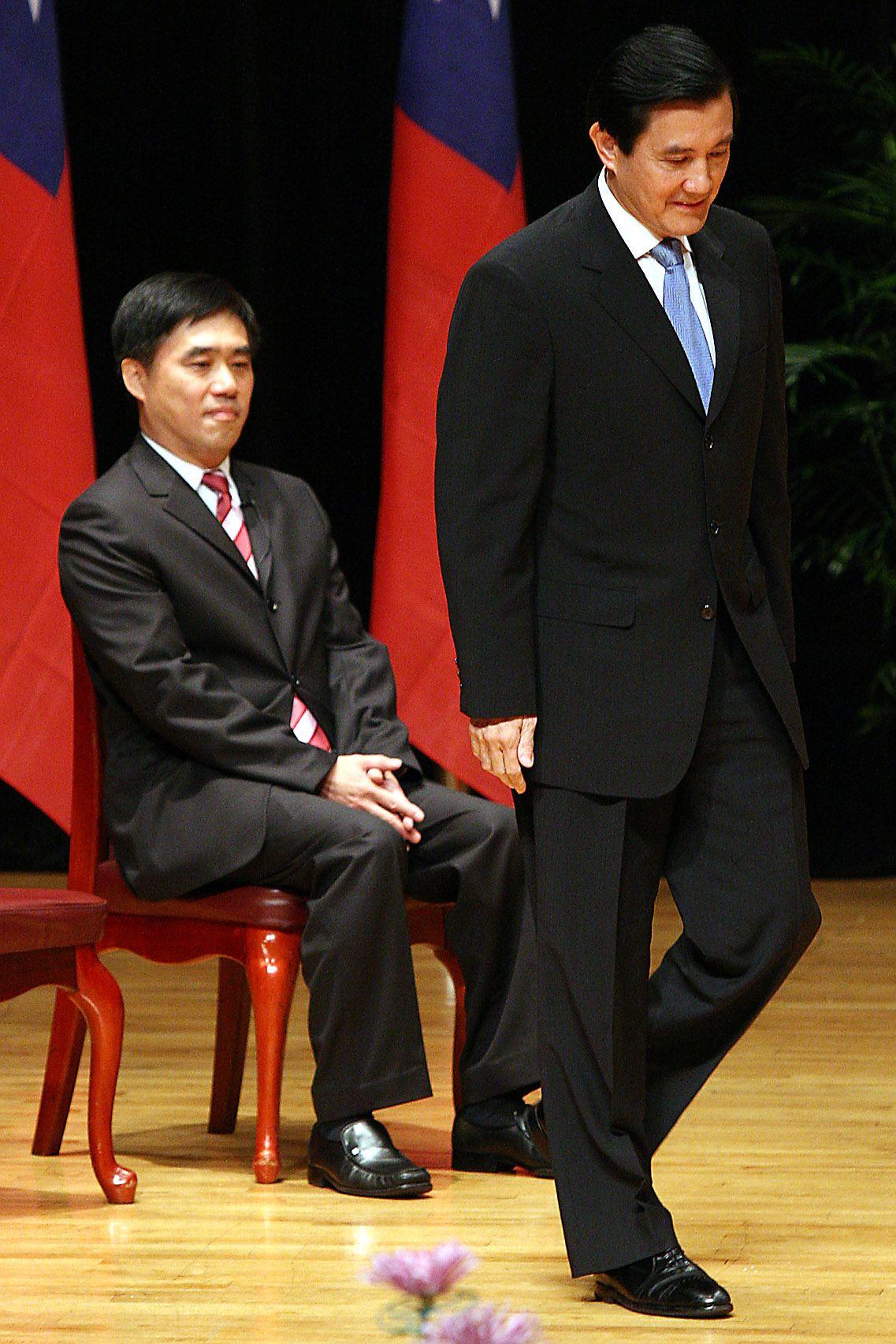 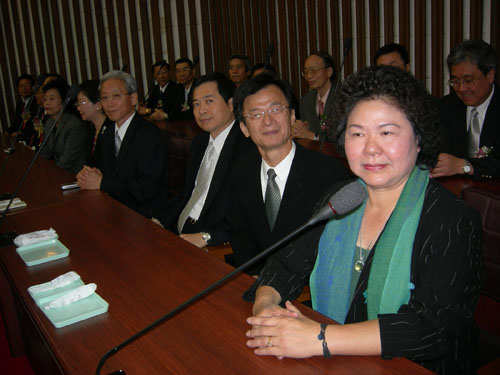 Both Taipei City Mayor Hau Lung-bin (郝龍斌) and southern Kaohsiung City's first female mayor Chen Chu (陳菊) promised a better life for city residents at their inaugural ceremonies yesterday.
Meanwhile, newly-elected Taipei and Kaohsiung City councilors were sworn in, with the island's main opposition Kuomintang capturing the seats of both Taipei and Kaohsiung City Council speakers as well as vice speakers.
For the new KMT Mayor Hau, maintaining a cooperative relationship between the city government and the Democratic Progressive Party-led central government seems to be the most important task.
Vice Premier Tsai Ing-wen (蔡英文) presided over the handing-over ceremony between incoming KMT mayor Hau and outgoing mayor and KMT Chairman Ma Ying-jeou (馬英九).
Tsai urged Hau to attend the weekly Cabinet meeting frequently.
"I expect that the new Taipei mayor, without the burden of party affairs, should be able attend the Cabinet meeting," said Tsai.
Tsai noted that Premier Su Tseng-cheng told her to remind the new mayor of his responsibility to attend the weekly meeting, as Ma was usually absent from Cabinet meetings during his tenure as Taipei mayor - only attending them three times after Su became the premier in 2006.
The vice premier said he hoped that Hau could list what kind of assistance that the central government could provide for the city government, exchange opinions on municipal affairs with the Cabinet and find out an acceptable way to resolve the dispute over its national health insurance debts.
Ma asked the central government to pay more attention to northern Taipei City. Ma stressed that he had handed over 43 important municipal projects to Hau and briefed him on what issues the new mayor should keep an eye on, adding that important municipal affairs were not explained to him when he took over the post of from then-mayor Chen Shui-bian (陳水扁) eight years ago.
After handing over the city government to Hau, Ma said he would concentrate on his job of KMT leader. Ma thought that he did not do a bad job during his eight-year term as mayor, and reminded those present of the fact that the central government still owes money to the city government over construction on the mass rapid transit system.
New KMT Mayor Hau vowed to lead a clean administration, boost public safety, and bring prosperity to the nation's capital.
"My team and I will devote every effort to carry out my promises, such as promoting policies in support of a single version of textbooks, improving public safety, revitalizing the western part of Taipei City and cleaning the Tanshui River," said Hau.
In another inaugural ceremony in the south of the island, incoming Kaohsiung mayor Chen Chu pledged to never engage in corruption or bribery and vowed to raise employment rates in the southern port city as well as bring happiness to city residents.
Chen said that she will work hard to make Kaohsiung City become a hopeful city, to retain the city's talent and to prevent young Kaohsiung people from needing to look for jobs in other counties or cities.
The DPP Kaohsiung mayor also requested that the premier, who presided over Chen's inauguration, help boost Executive Yuan investment in Kaohsiung.
Su noted that Chen is a hardworking and diligent person and believed that under Chen Chu's administration, Kaohsiung City will become an even bigger southern city.
Three former DPP governors of the southern city, including former Kaohsiung mayor Frank Hsieh (謝長廷), deputy mayors Chen Chi-mai (陳其邁) and Yeh Chu-lan (葉菊蘭), successively made efforts to promote the development of the city and have turned the city into a beautiful place, Su noted, stressing that Chen Chu will continue their jobs to ensure its denizens a better future.
Council speakers
Meanwhile, Taipei and Kaohsiung City Council speakership and vice speakership elections took place yesterday.
In the Taipei City Council speakership race, KMT Councilor Wu Bi-chu (吳碧珠) was re-elected and the KMT's nominee for vice speakership Chen Chin-chiang edged out ruling Democratic Progressive Party Councilor Chou Po-ya (周柏雅) by only one vote.
Ma attributed the KMT's victory in the races to Taipei City Councilor Chiang Nai-shin's announcement of withdrawal from the vice speakership race.
Chiang previously insisted on participating in the race, but pulled out hours before the vote.
Chairman Ma praised Chiang for valuing the interests of the party as a whole above his own personal benefit, expressing hope that KMT nominees' winning the seats of Taipei City Council speaker and vice speaker will ensure smooth administration of KMT mayor Hau.
In Kaohsiung, KMT nominee Chuang Chi-wang chose independent Councilor Huang Shih-lung as his deputy and hence, they successfully picked up the speakership and vice speakership of the 44-seat city council, where seven independent Kaohsiung City councilors hold the balance of power.