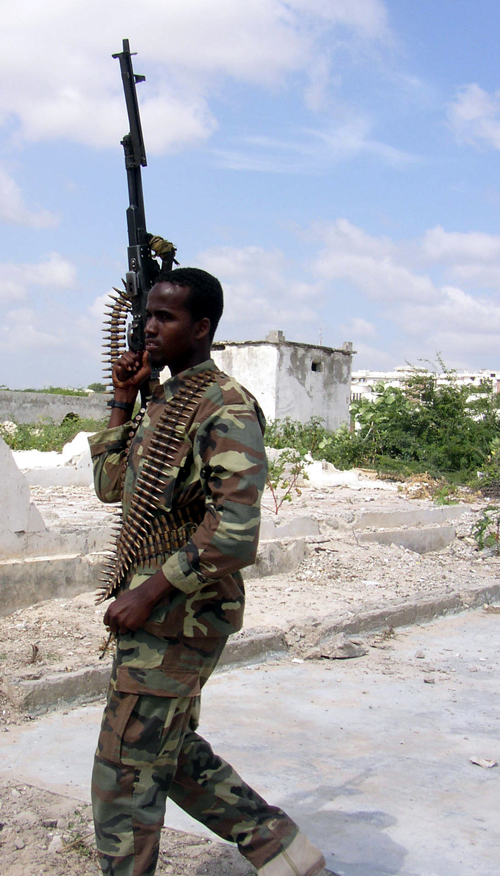 Ethiopian warplanes attacked two Islamist-held airfields in Somalia yesterday, witnesses said, in the most dramatic strikes yet of a war threatening to engulf the Horn of Africa.
The attacks - one of them on the capital Mogadishu - came after neighboring Ethiopia formally declared war, saying it was protecting its sovereignty against a movement run by terrorists.
A MiG fighter struck Mogadishu's international airport with machine-gun fire, airport managing director Abdirahim Adan told Reuters. Three jets later attacked Somalia's biggest military airfield at Baledogle, 100 kilometers west of Mogadishu.
"They are targeting the runway and I can see it being hit," said an Islamist fighter who asked not to be named.
A week of fighting between Islamists and Somalia's Ethiopian- and Western- backed secular government has turned long-running hostilities into open war.
After an initial Islamist assault, analysts say, it seems Ethiopia has prevented the Islamists from achieving their aim of overrunning the interim government.
Addis Ababa and the Washington say the Islamists, who hold most of southern Somalia after seizing Mogadishu in June, are terrorists backed by Ethiopia's enemy, Eritrea, and by al-Qaida.
Ethiopia has vowed to protect the government, which is virtually encircled by Islamist fighters in the town of Baidoa, halfway between Mogadishu and the Ethiopian border.
Fighting continued for the seventh day yesterday near Daynunay, outside Baidoa, between fighters loyal to the Somalia Islamic Courts Council and government troops backed by Ethiopian tanks, artillery and air strikes.
The government said it was closing all borders - a largely symbolic measure given that it has little power beyond Baidoa.
Government spokesman Abdirahman Dinari said the administration approved of Ethiopia's use of air power.
"Anywhere terrorists use to bring in arms and ammunition deserves to be hit," he said.
Ethiopia said it had attacked the capital's airport because the government had declared Somalia's borders closed.
"It was attacked because illegal flights were attempting to land there," said Ethiopian Foreign Ministry spokesman Ambassador Solomon Abede. "It was also reported that some of the extremists were waiting for an airlift out of Mogadishu."
The Islamists accused Ethiopia of targeting civilians.
"This latest attack has come at a time when so many people are travelling to attend haj," Abdi Kafi, a senior SICC official, said of the Mogadishu air raid. "It is a shocking attack."
The interim government's prime minister, Ali Mohamed Gedi, told Reuters 8,000 foreign fighters had poured into Somalia to back the Islamists. He concurred with a recent U.S. accusation that the Islamists' top ranks were controlled by al-Qaida.
Both sides say they have killed hundreds of opponents in days of battles with mortars, rockets, machineguns and tanks, although there has been no independent verification.
A Baidoa taxi driver told Reuters he saw Ethiopian military trucks ferrying injured from the frontlines yesterday.
"I can see seven big trucks carrying wounded Ethiopian soldiers lying on bloodstained mattresses," Abdullahi Hassan said by telephone. "They are heading towards the airport."
Addis Ababa fears a hardline Muslim state on its doorstep and accuses the SICC of wanting to annex Ethiopia's ethnically Somali Ogaden region. U.N. experts said recently 10 different countries were illegally arming both sides.