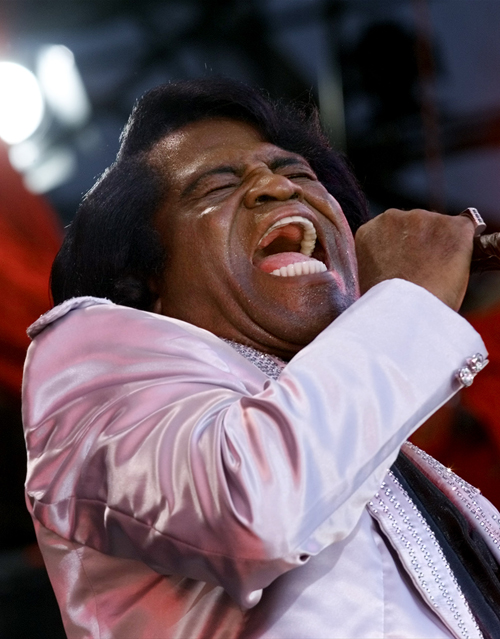 James Brown, the dynamic, pompadoured "Godfather of Soul," whose rasping vocals and revolutionary rhythms made him a founder of rap, funk and disco as well, died early Monday in Atlanta, his agent said. He was 73.
Brown was hospitalized with pneumonia at Emory Crawford Long Hospital on Sunday and died around 1:45 a.m. local time yesterday, said his agent, Frank Copsidas, of Intrigue Music. Longtime friend Charles Bobbit was by his side, he said.
Copsidas said the cause of death was uncertain. "We really don't know at this point what he died of," he said.
Along with Elvis Presley, Bob Dylan and a handful of others, Brown was one of the major musical influences of the past 50 years.
If Brown's claim to the invention of soul can be challenged by fans of Ray Charles and Sam Cooke, then his rights to the genres of rap, disco and funk are beyond question. He was to rhythm and dance music what Dylan was to lyrics: the unchallenged popular innovator.
"James presented obviously the best grooves," rapper Chuck D of Public Enemy once told The Associated Press. "To this day, there has been no one near as funky. No one's coming even close."
His hit singles include such classics as "Out of Sight," "(Get Up I Feel Like Being a) Sex Machine," "I Got You (I Feel Good)" and "Say It Loud - I'm Black and I'm Proud," a landmark 1968 statement of racial pride.
"I clearly remember we were calling ourselves colored, and after the song, we were calling ourselves black," Brown said in a 2003 Associated Press interview. "The song showed even people to that day that lyrics and music and a song can change society."
He won a Grammy award for lifetime achievement in 1992, as well as Grammys in 1965 for "Papa's Got a Brand New Bag" (best R&B recording) and for "Living In America" in 1987 (best R&B vocal performance, male.) He was one of the initial artists inducted into the Rock and Roll Hall of Fame in 1986, along with Presley, Chuck Berry and other founding fathers.
He triumphed despite an often unhappy personal life. Brown, who lived in Beech Island near the Georgia line, spent more than two years in a South Carolina prison for aggravated assault and failing to stop for a police officer. After his release on in 1991, Brown said he wanted to "try to straighten out" rock music.
From the 1950s, when Brown had his first R&B hit, "Please, Please, Please" in 1956, through the mid-1970s, Brown went on a frenzy of cross-country tours, concerts and new songs. He earned the nickname "The Hardest Working Man in Show Business."
With his tight pants, shimmering feet, eye makeup and outrageous hair, Brown set the stage for younger stars such as Michael Jackson and Prince.
Born in poverty in Barnwell, South Carolina, in 1933, he was abandoned as a 4-year-old to the care of relatives and friends and grew up on the streets of Augusta, Georgia, in an "ill-repute area," as he once called it. There he learned to wheel and deal.
"I wanted to be somebody," Brown said.
By the eighth grade in 1949, Brown had served 3-1/2 years in Alto Reform School near Toccoa, Georgia, for breaking into cars.
While there, he met Bobby Byrd, whose family took Brown into their home. Byrd also took Brown into his group, the Gospel Starlighters. Soon they changed their name to the Famous Flames and their style to hard R&B. In January 1956, King Records of Cincinnati signed the group, and four months later "Please, Please, Please" was in the R&B Top Ten.
While most of Brown's life was glitz and glitter, he was plagued with charges of abusing drugs and alcohol and of hitting his third wife, Adrienne.
In September 1988, Brown, high on PCP and carrying a shotgun, entered an insurance seminar next to his Augusta office. Police said he asked seminar participants if they were using his private restroom. Police chased Brown for a half-hour from Augusta into South Carolina and back to Georgia. The chase ended when police shot out the tires of his truck.
Brown received a six-year prison sentence. He spent 15 months in a South Carolina prison and 10 months in a work release program before being paroled in February 1991. In 2003, the South Carolina parole board granted him a pardon for his crimes in that state.
More recently, he married his fourth wife, Tomi Raye Hynie, one of his backup singers. The couple had a son, James Jr.