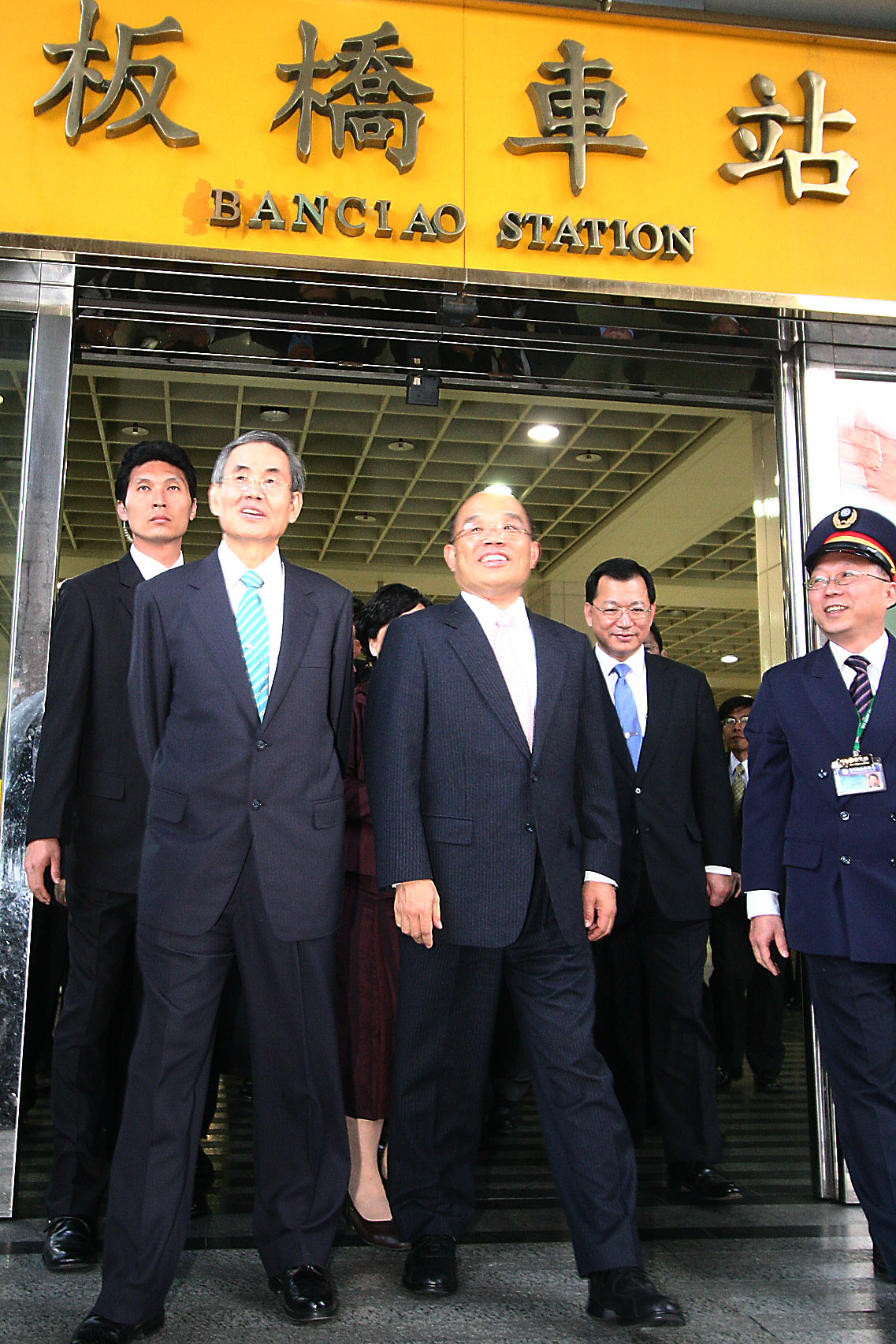 "I am very happy to take the high-speed rail with my wife; the ride was quiet, smooth, and stable," said Premier Su Tseng-chang (蘇貞昌) yesterday after a ride on the railway line that received official approval on Sunday to begin operations.
Su, Minister of Transportation and Communications Tsai Duei along with other officials took the train from Banciao to Zuoying yesterday to attend the inauguration ceremony for the Kaohsiung City mayor in a ride that was later interpreted by opposition legislators as "an endorsement for an unsafe rail line."
Asked how he felt about the train, Su said he was satisfied with the ride for its comfort, but hinted that he thought the fare too expensive.
"If only the ticket prices could make people more comfortable, it would be better," he said.
Su said that since the system had been approved by both London-based Lloyd's Shipping firm and Sunday's MOTC meeting, "the railway is safe."
"Let us embrace the era of high-speed rail, which brings people closer by traveling with less amount of time," Su said and urged everyone to "give the train a try."
Tsai echoed Su's view and emphasized that the rail system is safe for commercial use.
"Lloyd's Shipping firm and three Japanese Shinkansen experts confirmed that the THSRC is ready for business operations," Tsai emphasized.
The MOTC held a final meeting on Sunday to decide whether to approve an operating permit for the bullet train after it had maintained an "accident free record" for one month. The rail currently runs from Banciao, Taipei County to Zuoying, Kaohsiung.
Japanese railway experts invited by the MOTC were absent at Sunday's meeting but submitted a paper stating that the largest build-operate-transfer project in the world is safe, according to Tuei Bo-yi, （崔伯義）the chief project manager of China Engineering Consultant Inc. Officials who participated in the meeting included the MOTC Vice Minister Ho Nuan-hsuan (何煖軒）, Bureau of High Speed Rail Director Wu Fu-hsiang (吳福祥), Director-General of the Department of Railways and Highways Yin Cheng-pong, the Taiwan High Speed Rail Corp. representatives and CECI representatives. They agreed to issue a permit to the THSRC to begin operations, likely to be issued within one week.
Opposition lawmakers blasted the approval, however, and cast doubts on the safety of the rail. People First Party legislator Liu Wen-hsiung (劉文雄) threw the rail-related documents on a table while attending a transportation committee yesterday.
"Tell me, do the inspection team experts agree the rail is safe? Has the THSRC solved all 33 deficiencies that were outlined in the report?" Liu questioned.
PFP caucus whip Cheng Chin-ling (鄭金玲) threatened to slash the MOTC's budget if the bureau does not withdraw the operating permit to safeguard consumers' safety.
The Kuomintang said it will join the "cherish your life by not taking the rail" campaign launched by the Consumers' Foundation.
KMT lawmaker Lin Hung-chih (林鴻池) said the MOTC ignored the existing deficiencies of the rail and approved it for operation at the cost of the public's safety. "If unfortunate accidents take place in the future, the MOTC has to be responsible for them," Lin challenged.
On the other hand, ruling party legislators were more supportive of the rail operation and urged the KMT and PFP to have faith in experts' recommendations.
"The opposition parties are entitled to use the strictest standards to examine the rail, but they should stop making such ominous predictions," the Democratic Progressive Party's Cheng Yun-peng said.
DPP Legislator Huang Wei-cher noted that if the KMT and PFP cannot even believe in the UK and Japan's professional evaluation, "who else should we believe?"
The THSRC is reportedly set to begin operations early next year. The THSRC said they will provide a "trial operation" for at least one week before officially launching the service. During the trial period, tickets will be priced at a discount. In the system's initial stages, there will be 19 trains a day going in each direction, offering approximately 38,000 seats each day. There will no trains running non-stop from Banciao to Zuoying, according to the THSRC. Trains between the two points will take 120 minutes to complete the trip.