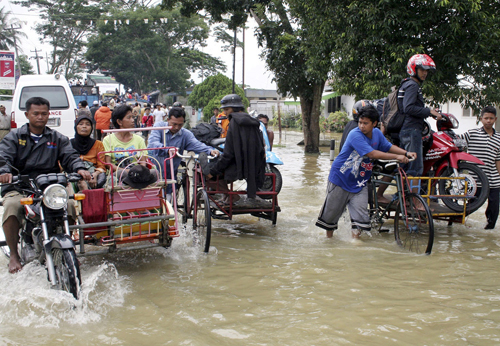 Two years after the devastating tsunami, Indonesia's Aceh province was yesterday grappling with more tragedy after floods and landslides killed at least 90 people and left thousands waiting to be rescued.
Troops and volunteer rescue workers were attempting to evacuate thousands of people trapped by the floods which have forced around 300,000 to flee their homes on the island of Sumatra.
Aceh was the worst-hit, with 60 dead in one district alone as the region prepared to mark the second anniversary of the December 26, 2004 Indian Ocean catastrophe.
Whole villages have been swallowed by flood waters following a week of torrential rains. Some 4,000 people were stranded in Gayo Lues district of central Aceh, an official said.
"Several road access points have been covered by landslides so we are now trying to drop relief by air," Aceh provincial spokesman Nurdin Joes told AFP.
Only house roofs and the minarets of mosques showed above the muddy brown waters in the worst-hit district of Aceh Tamiyang in aerial photographs taken by the Aceh and Nias Rehabilitation and Reconstruction Agency.
Villagers were shown sheltering on higher ground surrounded by flood waters, with some people floating precariously on logs.
Some 150,000 people in Aceh Tamiyang have taken refuge on higher ground but water levels remained high, local police chief Agus Santoso told ElShinta news radio.
"Water levels in the upstream areas in Aceh Tamiyang remain about two meters in some areas. The area is surrounded by rivers and the water level has not receded," he said.
Villagers said they were running short of food.
"We have not received any food, we have not eaten rice for five days. We're surviving on sweet potatoes and bananas," Anto, a resident of Tenggulun village in Aech Tamiyang, told ElShinta.
"Many children are getting sick with fever and diarrhea," he said.
In North Aceh, two people were killed and more than 140,000 people fled their homes, deputy district head Nasrullah told AFP.
"We need food, clothes and tents for the displaced people," he said.
"Water has receded in some places, but it's flowed to lower areas and flooded more villages," he said.
In the neighboring province of North Sumatra, at least 19 people were killed in a landslide which buried dozens of houses while nine others died in the floods.
Television pictures showed villagers perched under makeshift shelters along railway tracks built on banks which remained above the waters.
"We are now concentrating on evacuating people who are trapped in their homes in the town of Kuala Simpang in Aceh Tamiyang district," Ghufran Zainal Abidin, the local chairman of the Prosperous Justice Party, told AFP from the worst-affected area.
"We have not received any more reports of dead victims as we are concentrating on saving the ones that are trapped in flooded spots," said Abidin who reported 60 dead in Aceh Tamiyang district Sunday.
Around 1,000 troops have been dispatched to Aceh and North Sumatra along with heavy equipment and helicopters, Commodore Mohammad Sunarto Sjoekronoputro said, according to the official Antara news agency.
Two Hercules transport aircraft loaded with tents, field kitchens and inflatable boats were being sent to the affected region.
Floods also hit neighboring Malaysia, where seven people were killed in the worst affected southern state of Johor. Some 74,000 were still sheltering at relief centers.
Indonesian Vice President Jusuf Kalla has pointed the finger at illegal logging as one of the causes of the deadly floods, and pledged that the government would intensify its efforts to replant the forests.
Last June, floods and landslides triggered by heavy rains killed more than 200 people in South Sulawesi province. Separate floods killed more than 20 people and forced 40,000 people from their homes in Borneo in the same month.