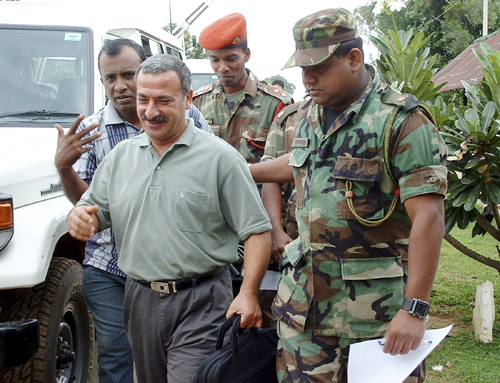 The Red Cross transported 25 crew members of a Jordanian ship to the Sri Lankan capital yesterday, days after they were taken by Tamil Tigers who boarded the vessel when it drifted into rebel-controlled waters, an official said.
The crew, which included Jordanians, Egyptians and an Iraqi captain, left rebel-held territory yesterday morning on board five International Committee of the Red Cross vehicles, said rebel spokesman Daya Master.
The Jordanian ship, the Farha-3, was carrying 14,000 tons of Indian rice bound for South Africa when it drifted into rebel waters Saturday when the rebels boarded the vessel and took them to their stronghold, Kilinochchi.
The Sri Lankan government - which had described as "preposterous" the rebels' claim of control over the island nation's territorial waters - yesterday filed a complaint with a Singapore-based anti-piracy organization that accuses rebels of forcibly boarding the ship.
"The story being told to the world by the terrorists is wrong," said Sri Lankan navy spokesman Commander D.K.P. Dassanayake, dismissing the rebels' claim that they had rescued the crew after the ship suffering engine trouble.
Dassanayake said the ship was 13 kilometers away from the shore when it developed engine trouble. The captain dropped anchor and engineers began working on the engine when the rebels went aboard.
"We were in touch with the vessel and we were in the process of making arrangements to send a tug to tow the ship to Colombo," Dassanayake said.
He said the rebels lifted the anchor and allowed the ship to drift closer to the shore.
"The captain at no stage activated the distress alarm, but he did push the piracy alarm button," Dassanayake said.
The Liberation Tigers of Tamil Eelam, which is fighting to create a separate homeland for Sri Lanka's 3.1 million ethnic Tamil minority, say they control waters around insurgent-held territory in the northeast, where they run their own administration.
The Tamil rebels deny the charge that they had any ill intentions. They say they had boarded the ship to inspect it after it drifted into waters the rebels claim they control.