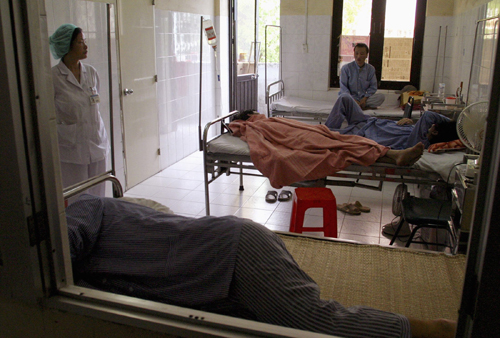 A stocky woman in blue jeans with spiky, gelled black hair dances on stage at one of Vietnam's rural rehabilitation centers, leading a hip-hop style chant.
"Hold hands together, we'll stop AIDS together," shouted the former heroin addict patient who returned to the rehabilitation center to encourage over a thousand recovering drug users and prostitute inmates, a third of whom have HIV or AIDS.
People face stigma and discrimination when they leave the minimum security centers, especially if they are infected with HIV or have AIDS. HIV-infected people are often refused employment and their children denied schooling.
"Everybody should unite in combating this disease," said Danh Thu Hanh, 36, a former addict who spent two years as an inmate.
Hanh works as a supporter of a self-help group called Cactus Blossom, one of about 30 that have emerged in recent years in Vietnam to represent people living with HIV and AIDS.
Vietnam's epidemic is less advanced than its Southeast Asian neighbors Cambodia and Thailand, but the United Nations estimates there are at least 280,000 HIV infections in a population of 84 million.
Health authorities report that the number of new cases is rising rapidly at 100 new infections per day. There were an estimated 14,000 AIDS-related deaths in Vietnam in 2005.
More infections are now caused by sexual transmission than by injecting heroin with unsterile needles and syringes, a worrying change in the course of the epidemic as the Communist-run country works to prevent it spreading into the general population.
In the southern commercial hub of Ho Chi Minh City and in northeastern Haiphong city and Quang Ninh province on the border with China, the epidemic is becoming generalized, experts say.
New HIV/AIDS law
On January 1, a new law comes into effect that experts say is a broad policy framework for HIV/AIDS prevention and treatment in underdeveloped Vietnam.
The law strengthens the rights of people with HIV, calls for AIDS education in the workplace and HIV medicines to be included in health plans.
It also provides for condom distribution, clean-needle exchange programs and the heroin substitute methadone as part of the response to the epidemic.
"There is certainly hope of reducing the epidemic because the knowledge level about HIV in Vietnam is high, programs are expanding and use of condoms is going up," said UNAIDS country head Nancy Fee.
Places such as "Education Labor Social center Number 2" - a cluster of mustard yellow buildings with red roofs in the lush green countryside near the capital Hanoi - have existed for years to incarcerate heroin addicts and prostitutes.
But facing a drug use relapse rate of 70 to 90 percent, coupled with the doubling of HIV infections in the past five years, the government is debating further reforms of the centers.
"They are thinking of introducing so-called open type of centers so that when people get addicted they can go to the center voluntarily for detoxification and rehabilitation," said Tran Tien Duc, country director for HIV/AIDS advocacy group.
center no. 2 in Yen Bai, Ha Tay province also has a kindergarten for 29 children orphaned or abandoned because they have HIV or are suspected by their parents of being infected.
When former U.S. President Bill Clinton visited Hanoi on December 6 with his HIV/AIDS foundation to sign an agreement to provide more AIDS medicines for Vietnamese women and children, he tackled discrimination directly.
At a public event, Clinton put his arm supportively on the shoulders of an HIV-positive woman founder of a self-help group called Red Flamboyant and urged young people to talk more openly about HIV to reduce fear and ignorance of the disease.
Vietnam is the only country in Asia to receive United States government money as part of President George W. Bush's US$15 billion five-year global fund known as PEPFAR.
The U.S. Embassy said nearly US$80 million has been dedicated to Vietnam so far for prevention, care and treatment.
Civil society needed
Vietnam's one-party rulers have opened the door to capitalism for businesses but the country has no independent civil society. Self-help groups are not legally recognised.
"For the new law to be really implemented it needs much greater involvement of people living with HIV and AIDS, civil society and a lot of monitoring," said Khuat Thi Hai Oanh, a department head in the semi-autonomous research group, the Institute for Social Development Studies.
The government has gone some way in recognizing the need for change in attitudes. The Party this year instructed that the disease should no longer be referred to as a "social evil" although drug use and prostitution still are.
At center No. 2, the staff of guards, doctors and nurses supervise a structured life of exercise, work, job training and treatment from dawn until dusk for about 1,100 residents.
Dormitories of hard, metal-framed beds for men and women are separated by walls topped with barbed wire.
"Some have returned to the center and of course it was disappointing but the issue here is that it is not easy to escape drugs and it takes time and will to do that," said center director Nguyen Thi Phuong.
Resident Do Thi Huyen said she tried drugs because friends were users, but she was arrested and admitted to the center.
"If I don't have HIV, I want to study, maybe open a shop to sell cosmetics and get married one day," the 23-year-old in a red sweater and black pants said quietly, her lips barely moving.