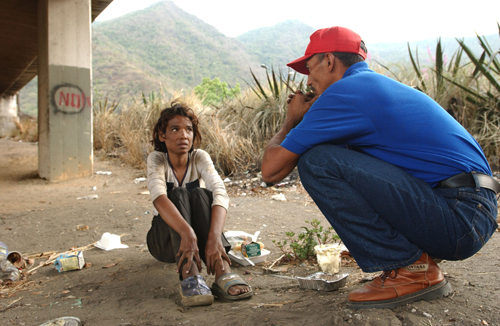 Beneath bridges and overpasses, the homeless of Caracas are spending the holidays in encampments of cardboard and discarded wooden palettes.
President Hugo Chavez has pledged to do away with homelessness in Venezuela through an aggressive outreach program that is offering street people communal housing, drug treatment and a modest stipend.
But while the government says it has helped thousands, others remain on the streets, presenting a formidable challenge to the newly re-elected Chavez as he aims to make good on a promise to fix an entrenched and complex problem.
Luis Mavares, a scrawny 37-year-old who has lived under a highway off-ramp for 11 years, said government social workers have offered to take him to a rehabilitation center but he has refused.
"I know they're doing something good, but it's not for me," said Mavares, who sleeps on an old mattress next to the trash-strewn Guaire River and says personal problems left him exiled from his family. "I don't like to be caged in."
Others say they have seen life-changing help from the state program Mission Negra Hipolita, named after the nanny of Simon Bolivar, the South American independence hero who is idolized by Chavez.
The program guides the homeless to shelters and rehabilitation centers, offering them medical and psychological care. Those who join can receive a paycheck equivalent to US$65 a week for community service work like clearing weeds or painting murals with slogans like "Say no to drugs, search for Christ."
"For me, it's bringing results," said Marco Barrios, 50, who worked cutting tall grass on a roadside recently and said the program is helping him break an addiction to crack cocaine through discipline and daily prayer.
Chavez, a fierce and constant critic of the U.S. government who was re-elected December 3, has started a range of social programs aimed at aiding the poor and drawing on Venezuela's oil wealth.
"This revolution cannot allow for there to be a single child in the street ... not a single beggar in the street," Chavez said earlier this year, acknowledging homelessness is a particularly difficult problem in countries across the world.
Venezuela's program began nearly a near ago and is headed by a retired general, former Defense Minister Jorge Garcia Carneiro, who says many participants are adopting more normal lives despite struggles with drug abuse. Last month, he said more than 9,000 people were being helped by the program.
Carneiro's ministry said an estimated 800 people remain on the streets in Caracas, but such estimates are disputed by Chavez opponents who argue progress has been exaggerated and that large numbers remain.
Some of the homeless refuse help from social workers who patrol at night in government buses offering food and shelter.
Street people still pick through trash heaps in parts of Caracas looking for food.
Norma Ramirez, who lives in a cardboard enclosure under a bridge with her 5-month-old daughter, said she didn't want to feel like a "prisoner" in a shelter and that she and her boyfriend were saving up from odd jobs to try to rent a room. "We'll only be here for a little while," she promised.
Every Saturday, more than 100 homeless people turn up for a free meal at the Catholic-run Mother Teresa of Calcutta cafeteria in a church in eastern Caracas, said Irasema Paz, who helps with the program and says the number coming has fluctuated little while the program has expanded to 22 other soup kitchens across Venezuela.
"There are many people on the street," she said, adding that most homeless resist the idea of moving into a shelter.
Some police and city workers have taken a hard line. Mavares said city workers burned a heap of his belongings earlier this month - including most of his clothes - as they put up Christmas lights in the area.
Mavares also lost an eye two years ago when he said police raided his camp and attacked him. He now wears sunglasses with a single dark lens over the stitches of his missing eye.
Mavares, who credits Chavez's homeless program with being good-intentioned, said he hopes a culture of police abuse in Venezuela will give way to more compassion for the homeless.