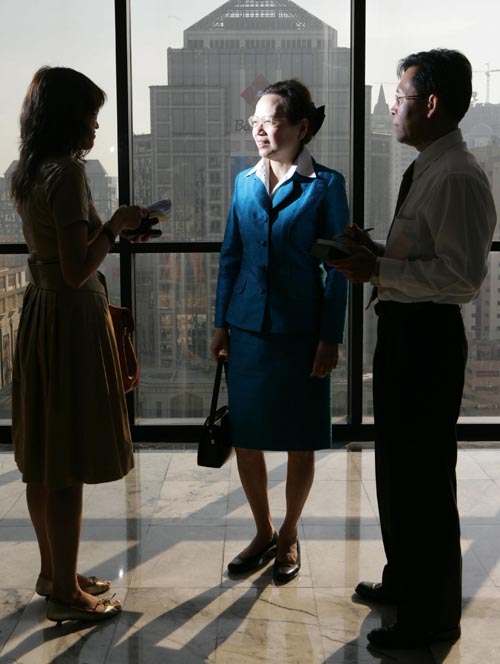 The Bank of Thailand said yesterday it has underestimated the impact of its draconian currency controls on the stock market, which is reeling from last week's record losses.
"We anticipated a certain impact for the (stock) market. But we didn't expect it to be this much," central bank governor Tarisa Watanagase said in an interview with the English-daily Bangkok Post published yesterday.
The Thai stock market nosedived 15 percent, the biggest one-day drop by value in the 31-year history of the bourse, on Tuesday due to panic selling over the currency rules imposed to curb the Thai baht's rise.
Facing the stock losses amounting to a staggering US$23 billion on the day, Finance Minister Pridiyathorn Devakula backtracked on the capital measures, which only took effect last Tuesday, in an embarrassing policy U-turn.
"The lesson that we have learned is that market panics occur more than we thought, that the herd mentality of investors is strong," said Tarisa, the first woman to head the central bank.
"We will need to consider investor psychology more," said the governor, who took the helm of the Bank of Thailand in October after Pridiyathorn left the top job to join the military-backed government as finance minister.
Since last Tuesday's stock debacle, the market has rebounded and the Thai baht has fallen to the 36.00 level to the dollar from a new nine-year high of 35.12 last Monday.
But analysts have said the policy flip-flop severely damaged Thailand's reputation as a major regional financial market, and left foreign investors, who make up 40 percent of the Thai market, deeply skeptical of the government's economic policy.
Yet Tarisa defended the currency controls and portrayed Thailand as a victim of global currency speculators.
"The baht has been moving in a one-way direction, even as other currencies have fluctuated up and down. If we didn't break the momentum, we wouldn't have known where the rate would end," she said.
The baht has risen 15 percent against the dollar since the start of this year, and average capital inflows into Thailand jumped to US$950 million per week in early December from US$300 million on average in November, she said.
"China, Hong Kong and Singapore offer no real opportunities for currency speculation" because their currencies were fixed in a very narrow range, she said.
"It's the smaller, open economies - Thailand, Indonesia and the Philippines - that are the targets," the bank chief said.
Tarisa said the central bank had no plans to introduce further currency control measures for now and forecast foreign investors would soon return to the Thai market.
"We continue to welcome long-term investors," she said. "But if you are short-term, sorry. Right now, the economy can't afford fund flows like this."