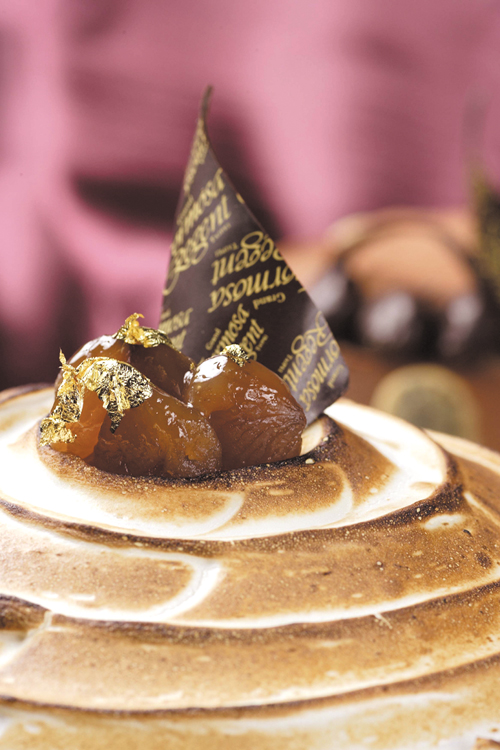 Very few people in the world can resist a good dessert with a seductive appearance and sweetness that imbues to the heart. Bringing happiness to the Taiwanese public, Grand Formosa Regent Taipei's newly appointed Pastry Chef Delcourt Laurent, who is a French native, is utilizing fresh chestnuts of the season in a series of modern and traditional treats in the Enchanting Chestnut Desserts promotion at Brasserie and azie bun from December 1st to 31st.
Chef Delcourt Laurent has been at his new post at Grand Formosa Regent Taipei for three months, prior to which he has served as pastry chef as numerous renowned hotels throughout the world, including the Grand Hyatt Amman Jordan, Conrad Hotel in Cairo, Egypt, and others in China, the Middle East, and France.
Having been raised in the capital of desserts, Laurent has always been fascinated by the unlimited possibilities of making desserts, and after years of experience in this field, he is able to make not only the most traditional treats but also come up with innovative creations with his imagination. "Dessert is an essential in the French way of living," says Laurent. "Different produce of the season make different desserts, and chestnuts are the perfect ingredient to make dessert because of their texture and sweetness."
Available at the Enchanting Chestnut Desserts promotion at Brasserie on the first floor of the hotel are several dashing treats including the French Chestnut Tart, which has cream cheese in place of cream for an even smoother bite that melts immediately in the mouth. The chef also has a Chestnut Macaroon that is popular nowadays, made from egg whites and chestnut paste. These treats have a lovable exterior, making them chic and tasty at the same time. In addition, there are Chestnut Mousse Cake, Chestnut Chocolate Tart, Chestnut Creme Brulee, Chestnut & Rum Cheesecake, and more. These yummies are also available at azie bun for takeout as a la carte items.
6-inch cakes for takeout at azie bun are NT$600 each, other a la carte items start at NT$80. Prices for Brasserie festival buffet are as followed (per person).
Weekdays
Lunch, NT$700; Afernoon Tea, NT$450; Dinner, NT$850
Weekends & Holidays
Lunch, NT$850; Afternoon Tea, NT$500; Dinner NT$940
All prices are subject to a 10% service charge. For more information or reservations, please call (02)2523-8000 ext 3870 (Brasserie) or 3157 (azie).