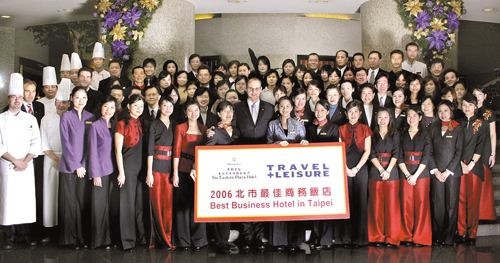 Shangri-La's Far Eastern Plaza Hotel receives yet another great honor from Travel + Leisure, the world's leading travel magazine with a worldwide circulation of almost one million. This prestigious magazine recently released its 2006 World's Best Business Hotels, and Shangri-La's Far Eastern Plaza Hotel was named the "Best Business Hotel in Taipei" together with 15 other top hotels in Asia which were also named first in their respective cities.
Earlier this year, Shangri-La's Far Eastern Plaza Hotel was also named by Travel + Leisure in its "World's Best Awards 2006," as one of their "Top 50 Hotels in Asia." With two honors in the same year, Wolfgang Krueger, the Hotel's General Manager expresses his excitement in receiving the news. Krueger indicates, "Both the owning company, the Far Eastern Group and the management company, Shangri-La Hotels and Resorts have provided tremendous support in upgrading hotel facilities. The recent grand re-opening of three restaurants-Shanghai Pavilion and Marco Polo Restaurant and Lounge-costing nearly NT$100 million in renovations, has been extremely well received by customers. Being awarded again at the end of the year is great honor and acknowledgement of the staff's hard work throughout this year! "
Travel + Leisure asked its readers who had traveled for business to rate top hotels on how well they cater to business travelers, with rating categories including Wi-Fi, concierge service, special amenities, and dining experience. The highest-ranking properties in major cities around the globe are listed alphabetically within each region.