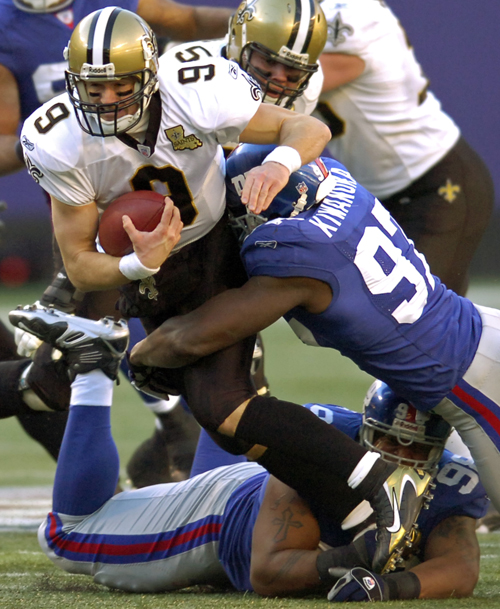 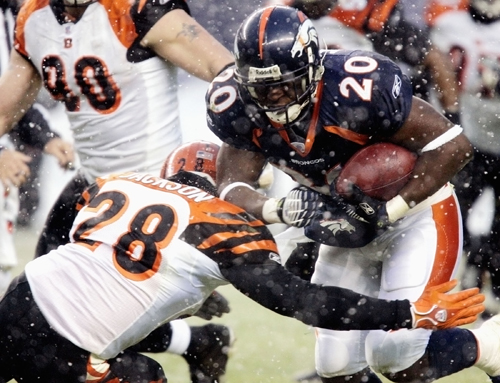 With the New York Giants and Atlanta Falcons continuing the NFC's full-speed retreat to the playoffs Sunday, the Green Bay Packers will be looking forward to next Sunday's game at Soldier Field against the Chicago Bears - at least until Saturday.
As badly as the Giants have played, they remain among five 7-8 teams still in the NFC hunt. And they finish their regular season Saturday night at Washington.
Since no 7-8 team plays another in the regular-season finale, it is still possible, though unlikely, that the NFL will see its first playoff team with a losing record since realigning to eight divisions.
Packers feeling good
At 7-8, NFC teams like the Packers are beginning to feel very good about themselves. And AFC teams like the hot 8-7 Tennessee Titans with remarkable rookie quarterback Vince Young are beginning to wish they were in the NFC.
Brett Favre likely won't be able to say whether the Bears game will be his last. At least one NFC team with no better than an 8-8 record will make the playoffs whether it wants to or not. If tiebreakers get to strength of schedule, the Giants edge the Packers.
If Favre knows he plans to retire, he isn't saying. Now it's not going to be the only story all week out of Green Bay.
The Packers can thank the New Orleans Saints for beating the Giants and the Carolina Panthers for beating the Falcons to aid their cause.
Those losses for the Giants and Falcons, both at home, put more than their playoff hopes in jeopardy. They also put the futures of coaches Tom Coughlin and Jim Mora in serious doubt. The Giants have lost six of their last seven games, the Falcons six of their last eight.
The Saints' dominating 30-7 win in East Rutherford, New Jersey, put them one win from clinching an NFC bye. If they beat the Panthers next weekend in New Orleans or if the Dallas Cowboys lose to Philadelphia on Monday or the Lions next Sunday, the Saints will be the No. 2 seed to the Bears.
The Panthers, losers of four in a row, got off the mat to beat the Falcons 10-3. Michael Vick became the first quarterback to rush for more than 1,000 yards in a season, but so far his career has been distinguished primarily by individual accomplishment.
Although the Eagles can still win the NFC East by beating the Cowboys on Monday and Atlanta next week, they are now the No. 5 seed and can clinch a playoff spot in Dallas.
At 8-7, Seattle clinched the NFC West and is currently the No. 4 seed. If the Seahawks stay that way and prevail over the No. 5 seed on wild-card week, Seattle would be the Bears' first playoff opponent.
Improbable Titans
By beating the Bills, 30-29, in Buffalo for their sixth straight victory, the Titans remained the most compelling story in the league and still hoping to become the first team ever to overcome a start of 0-5 and make the playoffs.
Young directed a 10-point rally in the fourth quarter to beat the Bills as coach Dick Jauron passed up a 45-yard field-goal attempt against the wind and J.P. Losman's final pass was intercepted.
Colts stumble again
Not all was well with the AFC, as the Indianapolis Colts, once the last undefeated team in the league, lost to the lowly Houston Texans for the first time in the Texans' five-year history.
The Colts have lost four of their last six and remain unable to stop the run, a key to championship defense.
Journeyman running back Ron Dayne rushed for a career-high 153 yards and two touchdowns against the Colts' porous defense, too much for Peyton Manning and the offense to overcome.
The San Diego Chargers needed to rally to beat Seattle and remain the top seed in the AFC. The New England Patriots clinched the AFC East by beating Jacksonville. The Baltimore Ravens clinched the AFC North by beating the defending Super Bowl champion Steelers.
Based on current conditions in the NFC, the Bears will be favored in every game until the Super Bowl, when they still look like they would be an underdog to most of the AFC contenders.
In Sunday NFL action: Chicago 26, Detroit 21; Carolina 10, Atlanta 3; Tennessee 30, Buffalo 29; Baltimore 31, Pittsburgh 7; Houston 27, Indianapolis 24; St. Louis 37, Washington 31, OT; New Orleans 30, NY Giants 7; New England 24, Jacksonville 21; Tampa Bay 22, Cleveland 7; Arizona 26, San Francisco 20; San Diego 20, Seattle 17; Denver 24, Cincinnati 23.