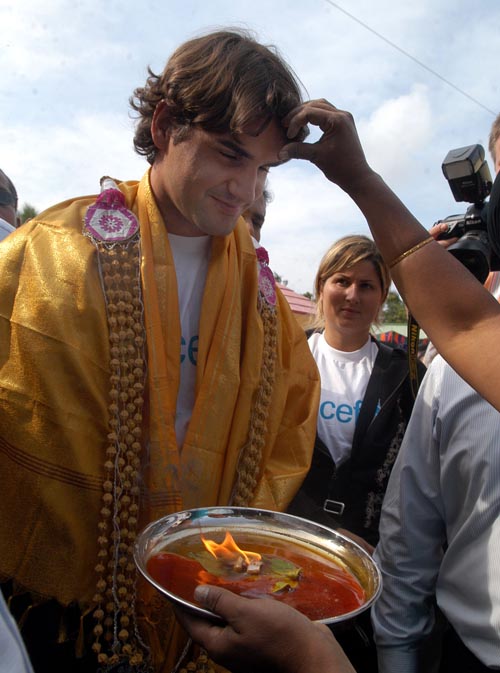 World number one Roger Federer says he hopes to extend his seemingly invincible reign over men's tennis into the new season.
The nine-times grand slam winner was virtually unstoppable in 2006, reaching the final in all but one of the 17 tournaments he contested and winning three of the four majors.
"I am basically living my dream. I hope I can keep it up," the 25-year-old Swiss told Reuters over the weekend.
"Motivation is never a problem and won't be a problem for the next few years."
The Swiss ace will kick off 2007 at the AAMI Classic in Kooyong in Australia on January 8, before starting the defense of his Australian Open title the following week.
Federer on Saturday concluded a two-day field trip of the tsunami-hit southern Indian state of Tamil Nadu in his role of a UNICEF goodwill ambassador.
"(Winning the) French Open will definitely be a dream come true," he said of the only grand slam that has eluded him.
"But on top of the list there is always Wimbledon and staying number one in the world because these are the ones that changed my life and made me the player and person I am today."
The Swiss became the first player to pocket more than US$8 million in prize money in one season and accumulated an unprecedented 8,370 ranking points.
Looking for competition
Such is his dominance that even if he puts his feet up until the end of February, he has hoarded enough points to break Jimmy Connors's record of 160 consecutive weeks as world number one.
But Federer also stressed the importance of having high-level competition that can push him to greater glories.
"You need the competition, some get more lucky, some get more unlucky. But we have great set of players at the moment .... like (Rafael) Nadal, (Andy) Roddick, (Lleyton) Hewitt, (Marat) Safin, (David) Nalbandian and new ones coming like (Ivan) Ljubicic and (Nikolay) Davydenko.
"(Andre) Agassi has just retired, we had a fantastic 2006 and an interesting 2007 lying ahead."
Along with the French Open, Federer has set his eyes on two other crowns in the coming years.
"Davis Cup will be nice and Olympics in 2008 will be a big goal for me as well. These are the ones I haven't won yet," he said.