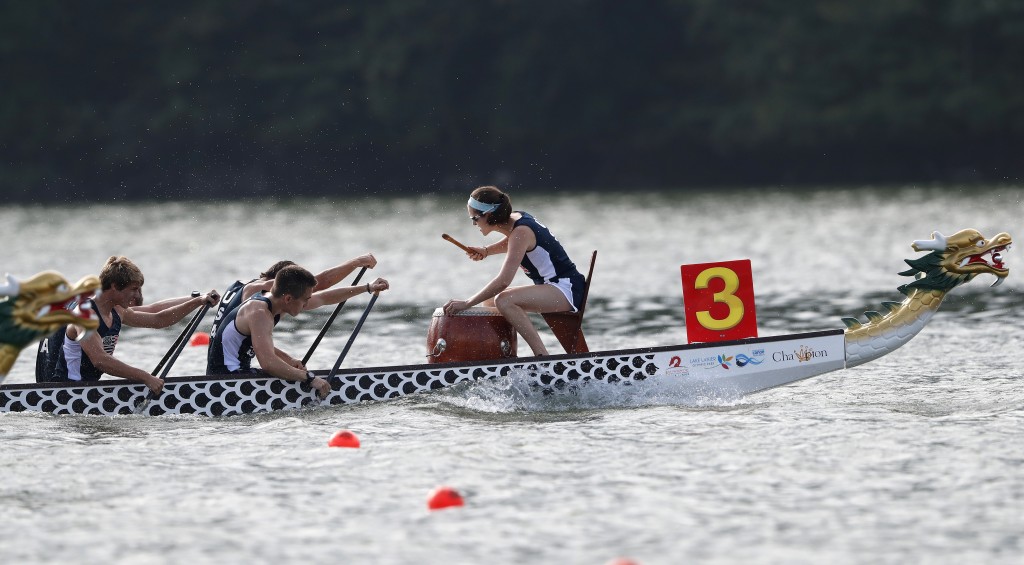 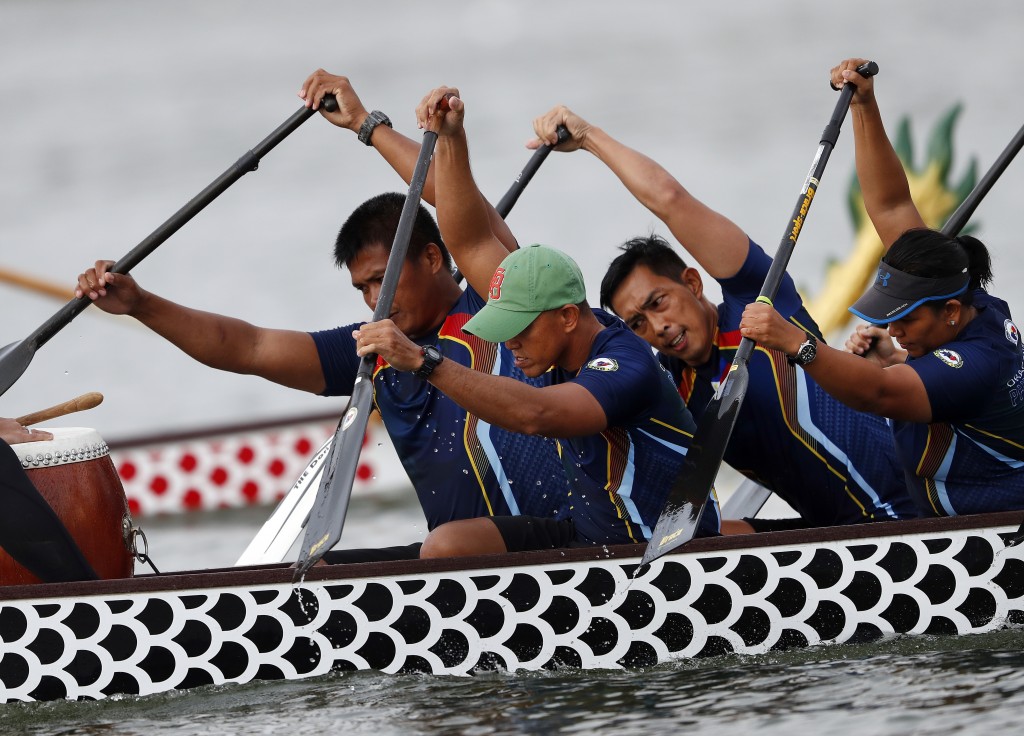 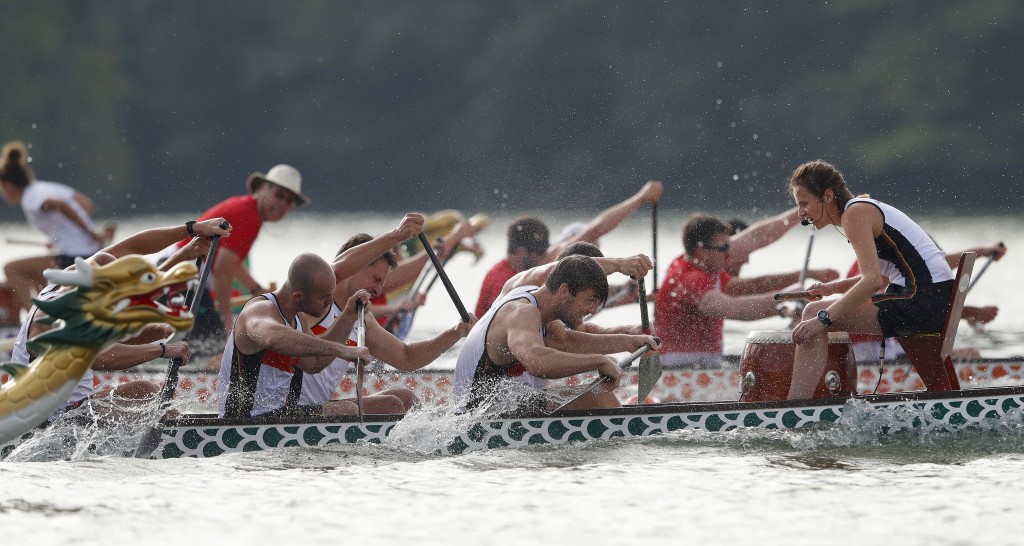 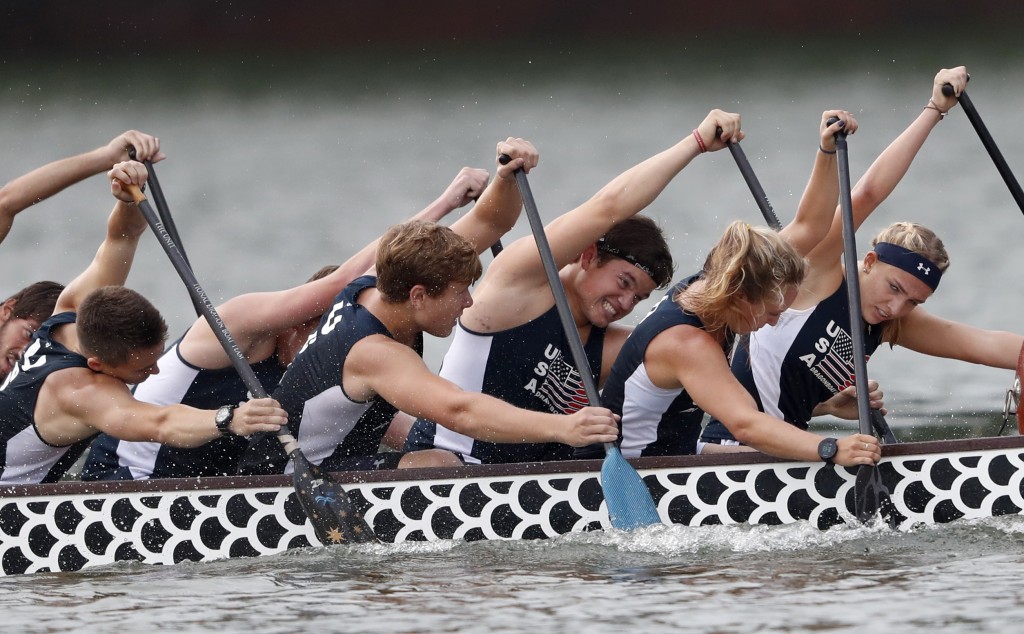 GAINESVILLE, Ga. (AP) — Their paddles slice through the water in perfect rhythm, all 20 of them, guided by a mesmerizing drumbeat and a legendary creature soaring from the bow of their vessel.

Welcome to the world of dragon boat racing, an ancient yet neophyte sport that combines strength, teamwork and even a bit of spirituality.

It's also a whole lot of fun, which was evident this weekend as the biennial world championships came to North America for the first time on Lake Lanier north of Atlanta, the same spot where rowing and canoeing were held during the 1996 Olympics.

"The high intensity of dragon boat is unlike any other paddle sport," said Ethan Palmer, who competed in rowing and kayaking before joining the U.S. dragon boat program. "And we have dragon heads on the front of our boats. It's different. It's eye-catching."

Dragon boats originated in China more than 2,000 years ago and remain a huge part of that country's folklore.

As the story goes, when beloved poet Qu Yuan died by drowning himself in the Miluo River, local fishermen beat drums, splashed the water with their paddles and threw rice dumplings into the river in an attempt to keep fish away from his body. Dragon boat festivals are still held each year to commemorate his death.

The competitive sport of dragon boat racing has a much shorter history, originating in the 1970s with vessels that are made of modern, lightweight materials but still draw on those ceremonial roots.

Dragon heads (and tails) are attached to the boats for racing. A drummer sits in the front of the boat, facing his crew with his back to the course, beating out a rhythm to keep the paddlers as one. The steersman stands at the back of the boat, handling the rudder. There are races for crews of 10 and 20 paddlers, who sit on benches in rows of two, tightly bunched in the long, narrow vessels that don't seem nearly big enough to handle all those bodies.

"That's a LOT of people to get rowing perfectly in sync," Palmer said. "In a dragon boat, with the close proximity that you sit next to each other, there is no room for error, literally or figuratively. You're inches apart. We're overlapping every single stroke."

Another American paddler, Swati Kadam, took up dragon boating about eight years ago as a way of relieving stress while pursuing her doctorate at the City of Hope cancer research center in Los Angeles.

She soon realized that it was so much more.

Kadam is also driven by the memory of her younger brother, Aditya, known to everyone as "D.A." and one of the top U.S. paddlers leading up to the 2014 dragon boat world championships. After a training session on his outrigger canoe, he died of cardiac arrest at the age of 23.

In tribute, his sister and all her teammates are racing at Lake Lanier with "D.A." on their paddles.

The world championship races cover distances of 200, 500 and 2,000 meters. Unlike rowing or sprint canoeing, which compete in a straight line, the longest event in dragon boat racing is carried out on the 500-meter course, with each boat going down and back on a couple of loops, requiring three turns around the buoys at each end while allowing fans on shore to view the entire race.

"When you want something to be popular, you've got to get people to see it," Palmer said. "Everybody who sees dragon boat loves it."

Like any developing sport, though, funding is a major obstacle to its growth and development.

The athletes largely have to pay their own way, with little help from the national or international federations. Only 11 nations are competing at the world championships, including the host Americans, with a couple of notable absences.

Those who did compete are hopeful of one day getting into the Olympics. Since dragon boat racing falls under the auspices of the International Canoe Federation (ICF), it would not need to be approved as a whole new sport, simply a new discipline that, most notably, would not require any new venues.

On the other hand, the International Olympic Committee may be reluctant to add an event that requires 10- and 20-person teams, which could add significantly to the total number of athletes at the Summer Games. Then again, the IOC signed off on five new sports at the 2020 Tokyo Olympics, including team sports baseball and softball, so those sort of arguments are met with a bit of skepticism from dragon boaters.

At the very least, dragon boat racing seems to fit with the IOC's goal of adding new sports that appeal to a more youthful demographic.

"To have the Olympic symbol on it," Kadam said, "That's all we're missing right now."