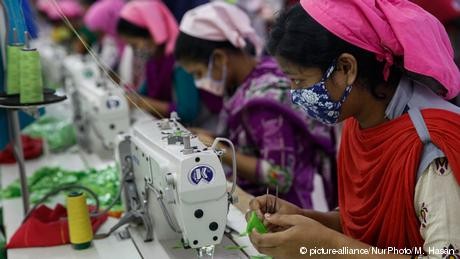 Hundreds of garment workers staged demonstrations in Bangladesh's capital Dhaka on Friday, after rejecting the government's plans to hike their minimum wage to Tk 8,000 ($95, €81).

The new monthly pay deal, which is due to come into effect from December, marks a 51 percent rise on the current minimum wage, which was set in 2013.

Bangladesh's Independent newspaper cited Joly Talukder, a union representative for the garment workers, as saying that the new wage is "illogical and unjust."

Deal turned down by most unions

Another union leader, Babul Akter, told the Agence France-Presse news agency that almost all unions had rejected the new wage, which was settled upon after months of negotiations.

Unions, who have fought for years for higher wages and better working conditions, said they would organize more protests across the country to fight for at least Tk 16,000 per month, according to the UNB news agency. That would mean a tripling workers' current pay.

One of the world's leading garment producers, Bangladesh last year shipped $30 billion worth of goods from its 4,500 factories to global retailers like H&M, Walmart, Gap and Tesco.

The garment industry accounts for more than 80 percent of the country's exports, and employs an estimated 40 million workers, mostly women.

A minimum wage was first introduced five years ago after at least 1,130 people were killed when the Rana Plaza garment factory in Dhaka collapsed.

Following the disaster, two organizations were set up to improve workers' conditions, focusing on health and safety and pay.

But Bangladeshi manufacturers say many retailers have not increased the price they pay for clothes, despite rising prices for raw materials.

Garment workers in Bangladesh earn lower wages than any other major garment exporting country and rely on excessive overtime to survive, according to a report released in April by the US-based Fair Labor Association.

But despite appalling working conditions, the Bangladeshi government has been quick to quash any major dissent by workers.

In December 2016, a large union protest was brutally ended by police, with hundreds of workers and union activists detained and charged with violence while more than 1,500 workers were sacked.