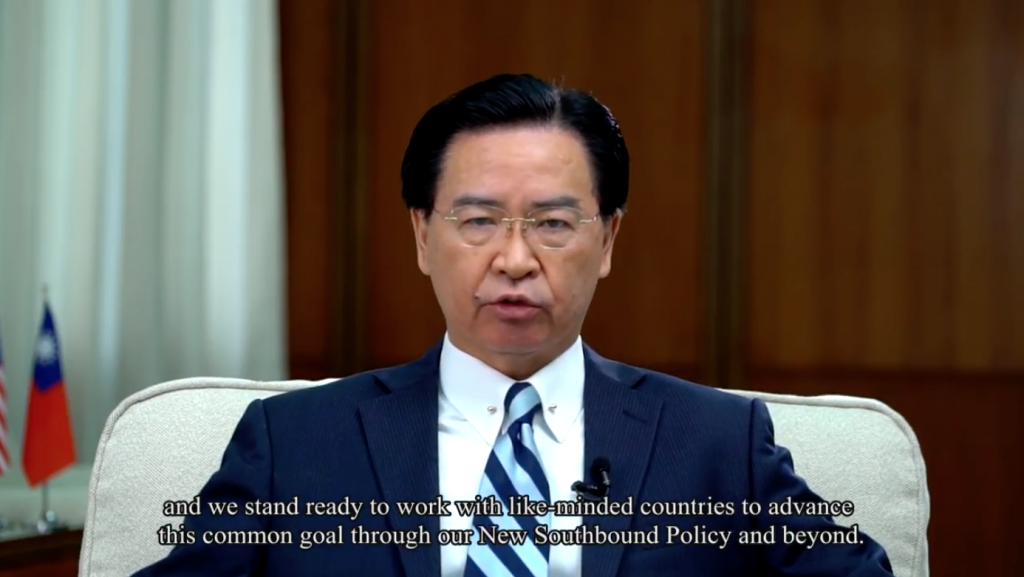 TAIPEI (Taiwan News) — Foreign Minister Joseph Wu (吳釗燮) urged the United States to consider putting a possible Free Trade Agreement with Taiwan back on the agenda, during recorded video remarks made to a think tank conference on Sept. 12.

Since Taiwan’s foreign ministers have traditionally been prevented from traveling to the U.S. capital, Wu made a recorded video for the annual symposium of the Global Taiwan Institute (GTI), a research institute based in Washington, D.C. with a focus on Taiwan affairs.

Wu expressed the government’s interest in signing a Free Trade Agreement with the United States. “I certainly see both the strategic and economic sense for it [FTA] in our two countries.”

Speaking to former Directors of the American Institutes in Taiwan (AIT), Richard Bush and Stephen Young, as well as scholars and researchers attending the conference, Wu said “that is a message I hope all of you can help [in] conveying to the Trump administration.”

However, current AIT Director James Moriarty, speaking at the luncheon of the TGI symposium, said making a bilateral trade deal between Taiwan and the United States may require some time as both parties need to make progress in certain issues.

Talks on a possible Taiwan-U.S. free trade deal have been stalled for years partly because of the bans imposed by the Taiwanese government on certain American pork and beef products.

“We continue to hold robust discussions with U.S. counterparts on ways to enhance and upgrade our trade relationship and highlight our efforts to reduce the bilateral trade imbalance that’s now in our favor,” said Wu, referring to tariffs imposed by the Trump administration on foreign goods imported to the United States.

The minister said that Taiwan’s defense budget for the next year is likely to increase by 5.6 percent, “the single largest increase in recent years.”

“It represents our commitment and determination to defending Taiwan,” added Wu. Taiwan traditionally purchases defense arms from the United States.

Speaking of Beijing’s intensified suppression of Taiwan in political, diplomatic, military and economic affairs, the minister referred to the Biblical stories in which Taiwan, as young David, would eventually defeat China, depicted as the giant Goliath, against all odds.