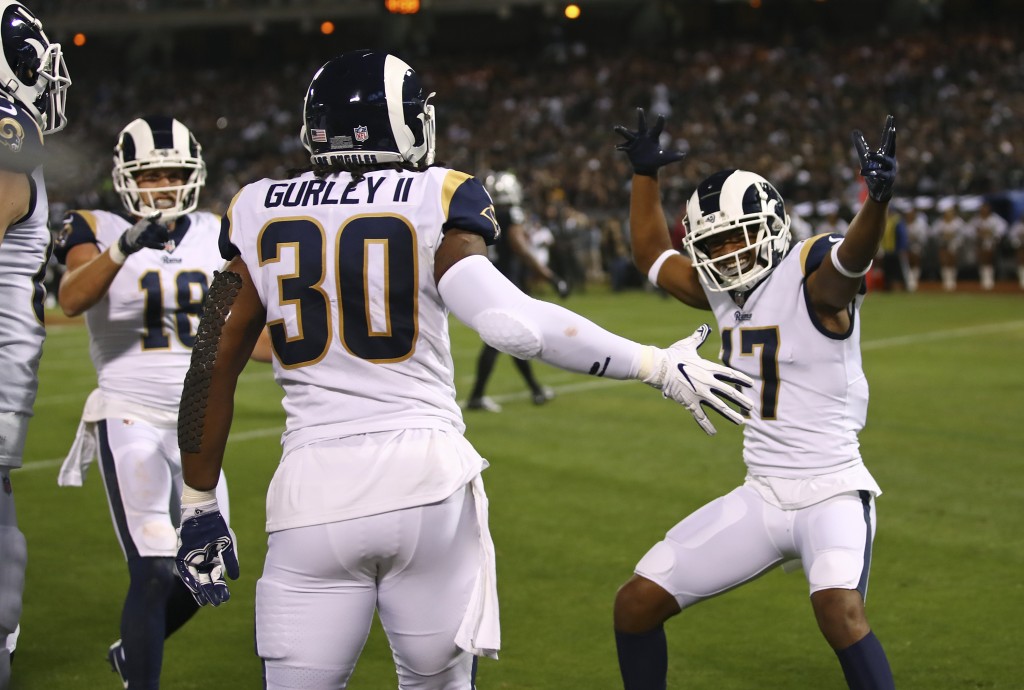 The Rams (1-0) scored on a 19-yard shovel pass from Goff to Todd Gurley in the first quarter and an 8-yard strike to Cooper Kupp in the third to win in Gruden's first game as coach of the Raiders (0-1) since the end of the 2001 season.

Gruden was traded to Tampa Bay after that season and beat the Raiders in the Super Bowl the following year. He has been announcing for ESPN for the past nine seasons before Oakland owner Mark Davis finally lured him back to the delight of Raiders fans.

But there were only boos by the end of the night after Peters iced the game with his touchdown return. He punctuated that with a celebratory dive into the end zone reminiscent of his close friend Marshawn Lynch.

Gruden's second stint started well with the Raiders taking the opening kick and driving 75 yards for a touchdown on a 10-yard run by Lynch. The Rams had Lynch stood up at the 3, but he powered his way into the end zone with help from a push by his offensive linemen.

Oakland managed just six points the rest of the way against a defense fortified by the offseason additions of former All-Pros Peters, Aqib Talib and Ndamukong Suh.

Derek Carr threw an interception in the end zone to John Johnson in the second quarter, another in the fourth when he lofted a pass right to linebacker Cory Littleton, and then the third to Peters.

The Rams, who rested their entire offense in the preseason, matched the early score when Gurley took a flip from Goff and raced to the end zone. They took control in the second half as they try to build on last season's breakthrough year that led to an NFC West title.

Los Angeles tied it at 13 on a field goal by Greg Zuerlein on the opening drive of the third quarter and then took the lead for good on a 58-yard, four-play drive that featured two passes downfield to another offseason addition, Brandin Cooks, and then the TD to Kupp.

The Raiders barely touched Goff all night just over a week after trading star pass rusher Khalil Mack to Chicago for a package that included two first-round picks. Bruce Irvin had the only sack when Goff held the ball too long and there were few other pressures.

The Raiders once again had issues with penalties, committing 10 for 145 yards in the first half alone thanks to two long pass interference calls against Rashaan Melvin (37 yards) and Dominique Rodgers-Cromartie (50). That's more yards in penalties than they had in any game during Gruden's first four-year stint and the most in the first half for any team since at least 2000. The Raiders had one penalty for 10 yards in the second half.

Raiders long snapper Andrew DePaola injured his knee in the first quarter and didn't return. TE Lee Smith filled in and provided accurate snaps on two field goals. He had a high snap on a punt but Johnny Townsend leaped and brought it down with no issues. It was a far cry from the 2012 season opener when Jon Condo got hurt for Oakland and Travis Goethel came in and botched three snaps in a loss to the Chargers.

Rams returner Pharoh Cooper left in the second half with an ankle injury.

Lynch sat once again during the national anthem. Lynch also sat for the anthem all of last season but never gave a reason for his decision.