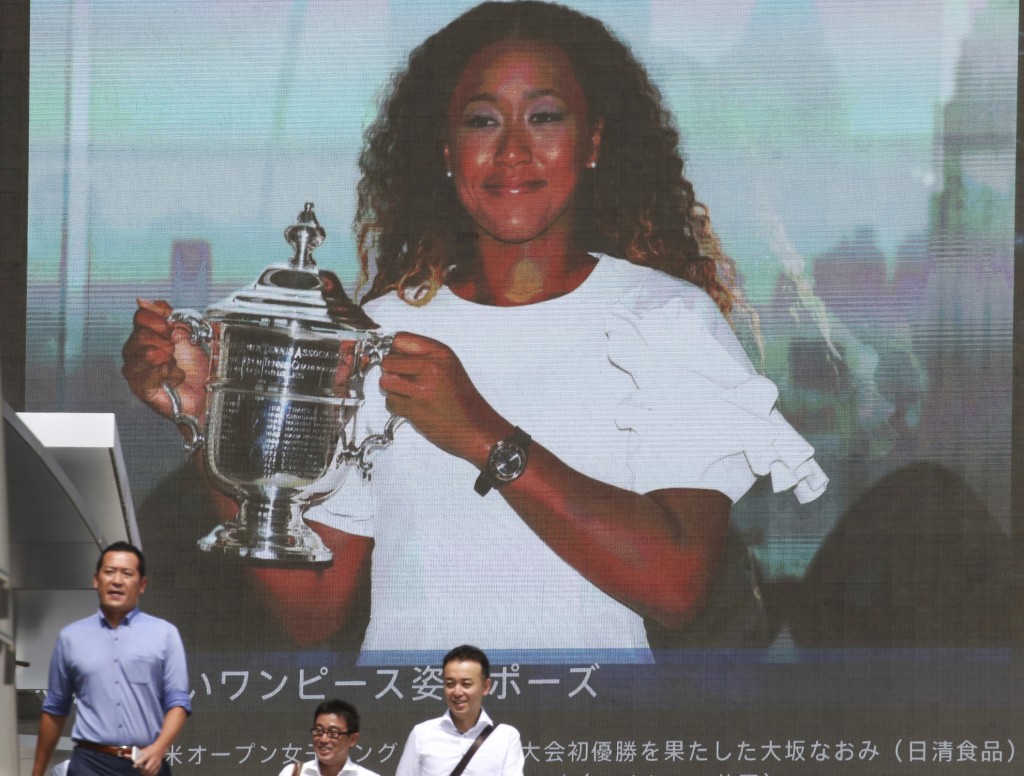 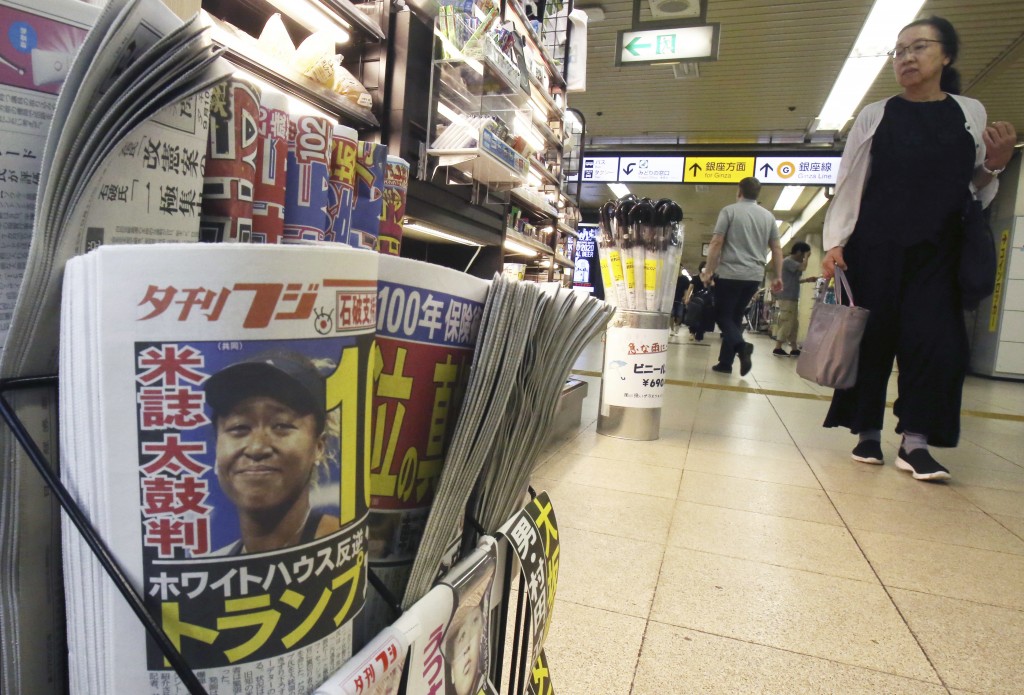 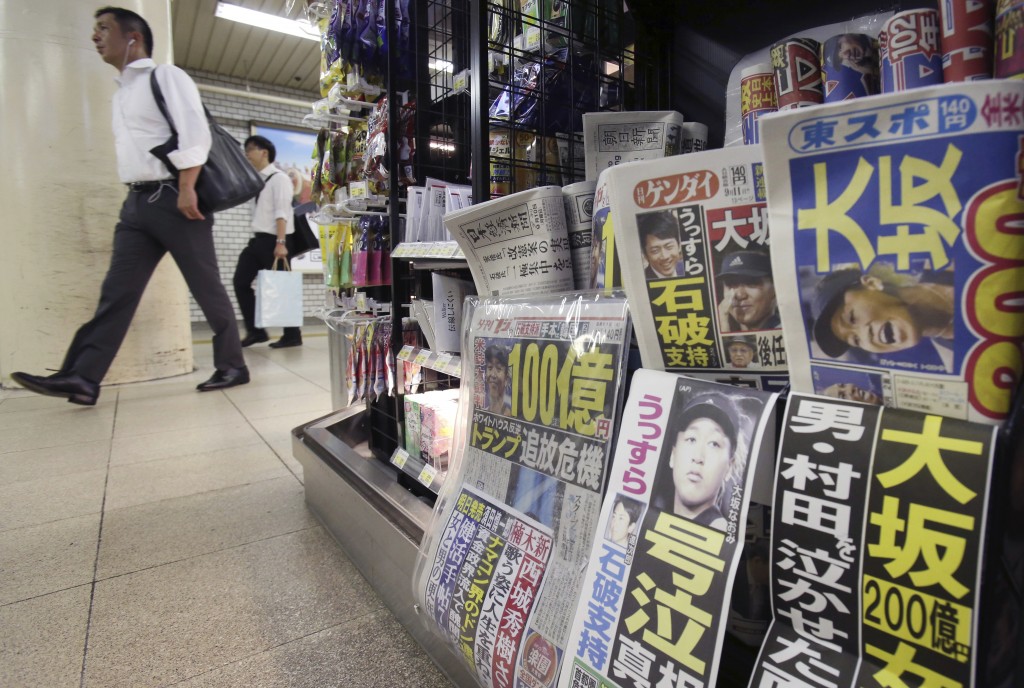 TOKYO (AP) — Naomi Osaka's halting Japanese, her manners — she bowed and apologized after beating Serena Williams in the U.S. Open final — and her simple charm have swelled national pride in Japan and eclipsed many questions about her mixed-race parentage in a famously insular country.

Two days after becoming the first Japanese player to win a Grand Slam tennis title, Osaka is still filling the front pages of the country's three major daily newspapers and leads the discussions on talk shows.

The perspective from Japan on Monday: Osaka is being embraced as Japanese despite her mixed background. National pride — at least for now — is overriding questions of cultural identity and what it means to be Japanese.

Williams' dramatic behavior during a chaotic final on Saturday, a hot topic in the United States and around the world, has been largely brushed aside in Japan with the focus on Osaka's poise under pressure.

Japan's largest newspaper, Yomiuri, called Osaka a "new heroine that Japan is proud of" and characterized her appeal as "the contrast between her strength on the court and her innocent character off the court."

Yomiuri centered Osaka's photograph holding the U.S. Open trophy at the top of its Monday front page — as did the two other large dailies. In a headline inside the paper, Yomiuri called her an "Overnight Queen — Powerful and Stable."

The Asahi newspaper also called her the "New Queen," picking up on her mix of "strength and gentleness."

None of the main-line newspapers dwelled too much on her background, which has been well reported. She was born in Japan to a Japanese mother and Haitian father, moved to the United States when she was 3 and now lives in Florida where she has trained for more than a decade.

In an interview Monday from New York on Japan's TBS television, she was asked what she wants to do now. She replied in Japanese: "Have curried rice topped with a pork cutlet." Then she slipped into English and said: "I am very honored. I don't know how to say that in Japanese."

She gave some of the same answers in a similar interview with Japan's NTV television.

"She is such a lovable character," said Seiji Miyane, the NTV talk show host.

She smiled through the media pressure, which several newspapers have called a Japanese trait. Her broken Japanese works as an asset, apologizing occasionally for getting the wrong word — or not knowing the Japanese word at all.

"She is not the type of person who asserts herself boldly, but she is shy and humble and that makes her look more like a Japanese," Junko Okamoto, a communications specialist, wrote in the weekly magazine Toyokeizai.

Forbes magazine has reported that Williams is the highest earning female athlete with income of $18 million per year, almost all from endorsements. The Evening Fuji tabloid newspaper, citing Forbes, speculated wildly about Osaka's potential lifetime earnings. Its headline suggested she could earn $100 million.

The Mainichi, one of top three general circulation newspapers, noted that Osaka was wearing a dress at a victory celebration from a well-known Japanese designer.

Osaka's 73-year-old grandfather, Tetsuo Osaka, surfaced in several interviews from Japan's northern island of Hokkaido, where he heads a fishing cooperative. He said he plans to meet his granddaughter when she plays next week in a tournament in Japan.

Their relationship seems solid now, but the New York Times reported that for a more than a decade Naomi's mother, Tamaki, had little contact with her family in Japan.

Roland Kirishima, a photographer who is half Japanese and Scottish, criticized some internet comments questioning if Osaka is really Japanese, because of her darker skin color.

"Look at the French soccer team that won the World Cup," he wrote on Twitter. "Half of the players are immigrants' sons or multi-racial. I'm surprised many people in Japan are still obsessed with racial purity. It's 21st century already. Please overcome this type of insular prejudice."

It looks like Japan has taken at least a first step.