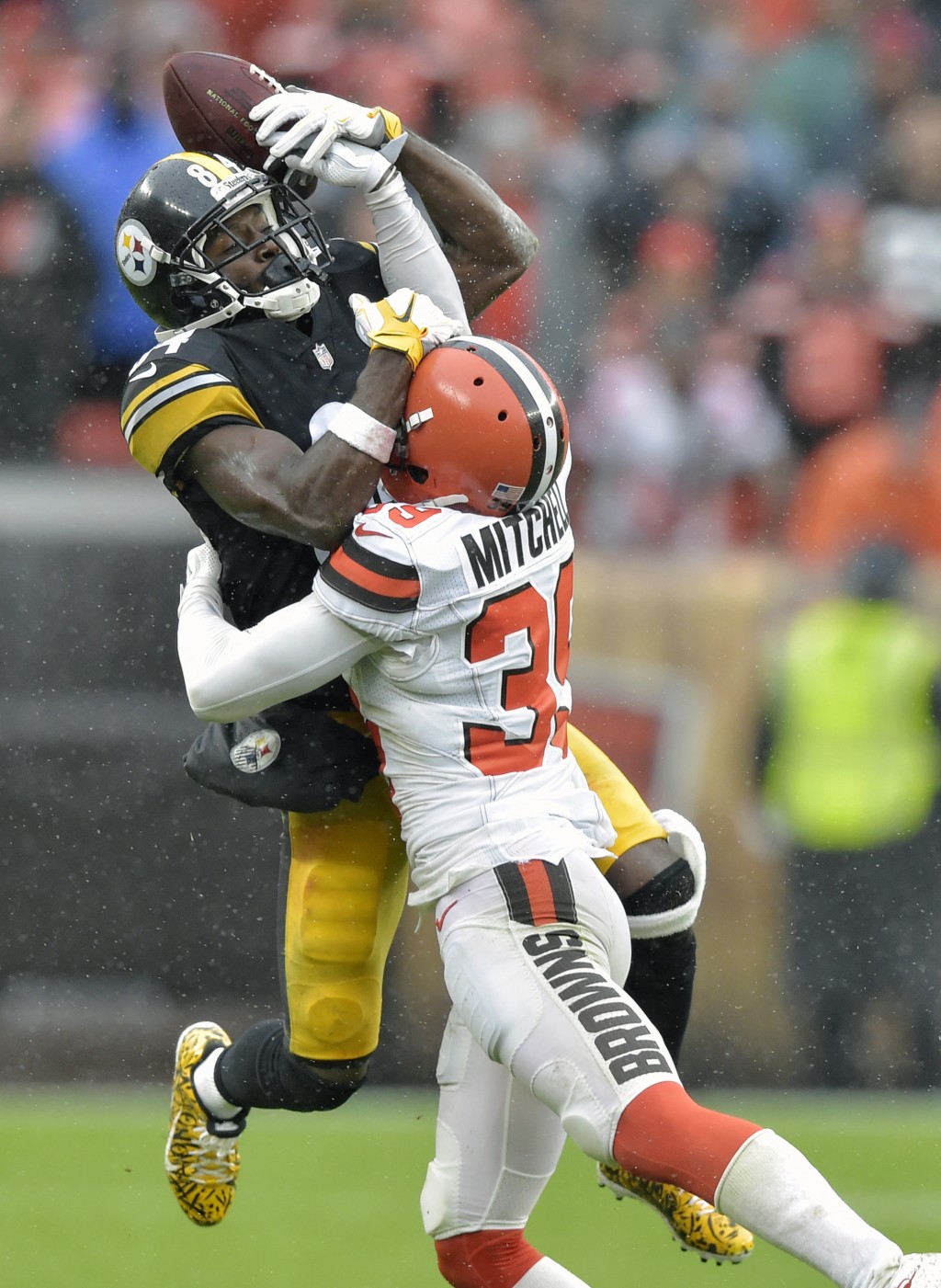 Cleveland ended its 17-game losing streak on Sunday with a 21-21 tie against the Pittsburgh Steelers. But the Browns missed a chance at their first victory since 2016 when kicker Zane Gonzalez's 43-yard field-goal attempt with 9 seconds left in OT was blocked by T.J. Watt.

The Steelers, who blew a 14-point lead in the fourth quarter, also wasted their chance to escape with a win when Chris Boswell was wide left on a 42-yard field-goal attempt with 1:44 remaining in the extra period.

The Browns remain winless since Dec. 24, 2016, but at least they have a positive after going 0-16 last season, just the second team to lose all 16 games.

NEW ORLENS (AP) — Ryan Fitzpatrick highlighted a 417-yard, four-touchdown performance with two scoring strikes of more than 50 yards. Starting for the suspended Jameis Winston, Fitzpatrick completed 21 of 28 passes without an interception and also ran for a short touchdown, bowling over free safety Marcus Williams on his way into the end zone.

Saints cornerback Marshon Lattimore, the 2017 Defensive Rookie of the Year, had arguably the worst performance of his short career trying to cover receiver Mike Evans, who caught seven passes for 147 yards, including a 50-yard touchdown that put the Bucs up 41-24 late in the third quarter.

DeSean Jackson caught scoring passes of 58 and 36 yards to highlight his five-catch, 146-yard day before leaving with a concussion.

The Saints, coming off a playoff appearance and hosting a team that won only five games last season, were among the more heavily favored teams in Week 1. They put together a frantic offensive flurry in the fourth quarter. Alvin Kamara scored on a 1-yard run and again on a 7-yard catch. Both were followed by 2-point conversions, cutting the Saints' deficit to eight points with 3:31 to go. On third-and-11, Fitzpatrick needed to make one more play — and did. He scrambled to his left for 12 yards at the two-minute warning. With New Orleans out of timeouts, Fitzpatrick was able to run out the clock.

INDIANAPOLIS (AP) — Andy Dalton rallied the Bengals with three scores in the final 19 minutes and Clayton Fejedelem scored on an 83-yard fumble return with 24 seconds to go. Cincinnati snapped an eight-game losing streak in Indy.

The loss spoiled the Colts' season opener — and the return of Andrew Luck, who made his first start in more than 20 months.

It looked as if Luck was up to his old tricks after staking the Colts to a 23-10 lead midway through the third quarter, and again late when he led the Colts 50 yards to the Bengals 25-yard line in the final minute.

But a completed pass on third down to Pro Bowl tight end Jack Doyle saw Fejedelem knock the ball out, scoop it up and sprint down the sideline, avoiding Luck on his way to the end zone for the sealing score.

A.J. Green had six catches for 92 yards, including a 38-yard TD catch in the third quarter.

Luck looked rusty initially with his first official pass since Jan. 1, 2017, being underthrown to Doyle and picked off by linebacker Preston Brown. But he wound up 39 of 53 with 319 yards with two touchdowns.

MINNEAPOLIS (AP) — Kirk Cousins passed for two touchdowns in his much-anticipated Minnesota debut, and the Vikings forced four turnovers to stick 49ers quarterback Jimmy Garoppolo with his first loss in eight games as an NFL starter.

Cousins connected with Stefon Diggs in the second quarter and Kyle Rudolph in the third quarter for scores, and the defense finished the job with three sacks and three second-half interceptions of Garoppolo. Mike Hughes turned one pick into a 28-yard touchdown return, the first by a rookie in a Vikings season opener.

Harrison Smith, who sacked Garoppolo on a third-down safety blitz and had an interception late in the fourth quarter, recovered a fumble by Alfred Morris at the 2-yard line after Linval Joseph stripped the ball just in front of the goal line late in the first half.

Garoppolo finished 15 for 33 for 261 yards and a touchdown pass to rookie Dante Pettis. With an injury depleted offensive line in front of him and the absence of top wide receiver Marquise Goodwin, Garoppolo was unable to capitalize on the opportunity for a comeback after the 49ers' defense forced three straight three-and-out possessions by the Vikings to start the fourth quarter. DeForest Buckner had 2½ sacks for San Francisco.

BALTIMORE (AP) — The Baltimore Ravens harassed and embarrassed Buffalo quarterback Nathan Peterman on a rainy afternoon, while Joe Flacco threw three touchdown passes, one to each of the new receivers.

Flacco went 25 for 34 for 236 yards before being replaced in the third quarter by rookie Lamar Jackson, who did little more than hand off after entering with a 40-0 lead.

Making its debut under defensive coordinator Don Martindale, the Ravens held Buffalo to 33 yards and no first downs in going up 26-0 at the half.

Making his third NFL start, Peterman went 5 for 18 for 24 yards and two interceptions for a quarterback rating of 0.0. Allen was 6 for 15 for 74 yards in Buffalo's most lopsided defeat since a 56-10 loss to New England in November 2007.

Baltimore had six sacks and limited Buffalo to 153 yards.

Brady and Gronkowski, who both floated the possibility of retiring over the offseason, connected seven times, including a 21-yard touchdown three plays after Deshaun Watson fumbled a handoff at the Texans 19 on Houston's first offensive play. Phillip Dorsett and James White also caught TD passes from Brady, the 41-year-old reigning NFL MVP.

Watson, who missed the final nine games last season with a torn right ACL, completed 17 of 35 passes for 176 yards, one score and one interception. He struggled to move the team in the first 40 minutes, managing just a pair of field-goal drives before Alfred Blue ran it in from 1 yard to make it 24-13 in the last two minutes of the third period.

A muffed punt by New England's Riley McCarron with under five minutes left set up Watson's 5-yard TD pass to Bruce Ellington and cut the deficit to 27-20. But after getting the ball back at their 1 with 43 seconds left, the Texans failed to reach midfield.

Lamar Miller ran 20 times for 98 yards for Houston, which welcomed Watson, defensive lineman J.J. Watt and linebacker Whitney Mercilus back from injuries. Watt had two quarterback hurries but was unable to sack Brady.

Blake Bortles threw a short touchdown pass and led two other first-half field goal drives. The Jaguars dominated, with the exception a Barkley-induced hiccup, in opening a season by living up to the Super Bowl hype.

Held in check much of the game, Barkley brought the sellout crowd to its feet shortly after the Jack touchdown with a spectacular 68-yard run aided by a great block by receiver Sterling Shepard. It got New York within 20-15 with 10:39 to play.

New York went for the 2-point conversion and Barkley (18-rushes for 106 yards) was stopped.

It proved costly when passes of 19 and 21 yards to Beckham (11 catches for 111 yards in his first game since -October) got New York to the Jacksonville 34. Instead of attempting what could have been a tying fourth field goal from Aldrick Rosas, Eli Manning (23 of 37 for 224 yards) threw a fourth-down incompletion.

A muffed punt cost the Giants a final possession in the last minute.

Hill had a 91-yard punt return for a score and a 58-yard TD reception during the first quarter before adding a 1-yard reception for a score in the fourth quarter to put the game out of reach.

Hill also had 169 yards on seven receptions, which is the second-most yards by a Chiefs receiver in an opener, according to Pro Football Reference. Carlos Carson had 173 yards receiving against New Orleans in 1985.

Mahomes, who moved into the starting spot after Alex Smith was traded to Washington in the offseason, was 15 of 27 for 256 yards as the Chiefs extended their winning streak over the Chargers to nine.

After the Chargers got the opening kickoff but went three-and-out, Hill took Drew Kaser's punt 91 yards for a touchdown just 1 minute, 57 seconds into the game. The third-year receiver fielded the punt near the right hash mark, but quickly found an opening up the left sideline. It was Hill's fourth punt return for a touchdown in 32 games and the Chiefs' league-leading seventh since 2013.

It was the Broncos' 18th win in their past 19 home openers, and few were more exciting or competitive.

Keenum threw for 329 yards and three touchdowns, but was also intercepted three times.

Wilson threw for 298 yards and three TDs, but was picked off twice and sacked six times.

Demaryius Thomas atoned for early hiccups with several key catches and a touchdown, and Royce Freeman, the first rookie running back to start an opener for Denver since Hall of Famer Terrell Davis in 1995, helped the Broncos all but salt it away.

The Seahawks got the ball back at their 12 with no timeouts and 1:01 left and couldn't go anywhere, Wilson finally throwing the ball up at midfield where cornerback Adam Jones picked it off with no time remaining.

Delays for lightning lasted a total of 3 hours, 59 minutes, and the game took 7 hours, 10 minutes to play. The previous longest game since 1970 was a Bears overtime victory against the Ravens in 2013 that took 5 hours, 16 minutes.

Grant's touchdown triggered a late flurry of big plays in an opener that was lackluster for the first six hours.

After his score, Ryan Tannehill hit Kenny Stills deep for a 75-yard touchdown. Darius Jennings returned the ensuing kickoff 94 yards for a Titans score, and they were driving when Miami's Reshad Jones helped to clinch the win with a 54-yard return after he intercepted Blaine Gabbert.

Titans starting quarterback Marcus Mariota threw two interceptions in the third quarter and then came out of the game with an elbow injury. Tight end Delanie Walker was carted off the field later in the period with a right leg injury, and tackle Taylor Lewan suffered a concussion, all of which meant a miserable start for Mike Vrabel in his head coaching debut.

GLENDALE, Ariz. (AP) — Alex Smith carved up the Arizona defense for 255 yards and two touchdowns, Adrian Peterson rushed for 96 yards and a score and Washington spoiled the coaching debut of Steve Wilks.

Smith and Peterson were playing their first game as Redskins and the two veterans made an impact from the start.

Smith, acquired from Kansas City in the offseason to replace Kirk Cousins, completed 21 of 30 passes without an interception and had TD throws of 13 yards to Chris Thompson and 4 yards to Jordan Reed.

Peterson, who played for Arizona a year ago and signed with Washington as a free agent on Aug. 20, finished his day with a 52-yard reception, but fumbled at the end of the play.

The Redskins outgained the Cardinals 429-213 and had 30 first downs to Arizona's 14 and it was even more one-sided before the Cardinals showed some life late in the game.

Arizona avoided a shutout when David Johnson ran 2 yards for a touchdown with 5:47 to play.

CHARLOTTE, N.C. (AP) — Cam Newton ran for 58 yards and a touchdown, and Carolina's defense turned in a dominant performance to beat Dallas.

Luke Kuechly had 13 tackles, Kawann Short sacked Dak Prescott twice and Mario Addison had a huge strip-sack of the Cowboys quarterback with 1:23 left to seal the victory.

Carolina's defense had six sacks in all and limited the Cowboys to 232 yards.

The Cowboys, who are looking for answers on offense following the departures of Dez Bryant and Jason Witten, couldn't do much against a stingy Carolina defense in the first half. The Panthers limited the Cowboys to 60 yards and four first downs to take a 10-0 lead into the locker room.

Prescott finished with just 170 yards passing and Ezekiel Elliott was held to 69 yards rushing and a touchdown. Dallas' leading receiver was Cole Beasley, who had seven catches for 73 yards.