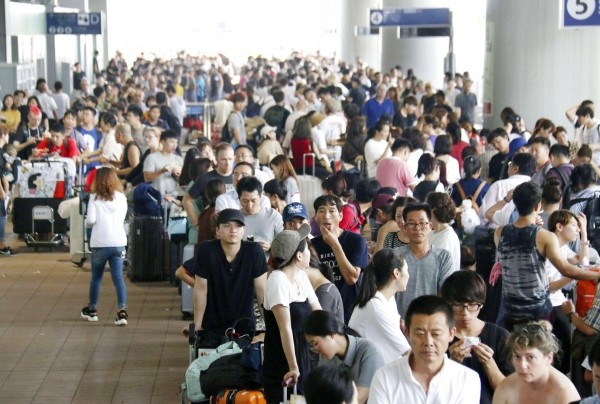 TAIPEI (Taiwan News) -- Witnesses are refuting reports by Chinese state-run media outlets which had claimed yesterday that Taiwanese tourists stranded at Japan's Kansai International Airport due to Typhoon Jebi were forced to declare themselves as Chinese, before they could board evacuation buses dispatched by the Chinese embassy.

As around 750 Chinese and 500 Taiwanese were among the 3,000 passengers who had been stranded at Kansai International Airport due to flooding brought on by Typhoon Jebi, the Global Times reported yesterday (Sept. 6) that the Chinese embassy sent 15 tour buses ostensibly to evacuate Chinese nationals. However, the report claims that some Taiwanese asked to board the buses and were allegedly told by Chinese tourists they could only do so as long as they declared themselves to be "Chinese."

The South China Morning Post ran a similar article which included the following quote from a witness cited in the Global Times:

"A few Taiwanese asked if they could board the bus provided by the Chinese embassy for evacuation. [Chinese people] all said, 'Sure, if you identify yourself as Chinese, follow your home country.'"

However, netizens who claimed to have been at the scene stated on the Japan Travel section of the popular Taiwanese online forum PTT that they had taken the buses sent by the Chinese embassy on Wednesday (Sept. 5) to go back to Osaka. He said he had originally been in line to take a ferry to the Port of Kobe, but because the line was so long he could not see the end of it.

He said a "well-intentioned" person told him that the Chinese embassy had sent buses to pick up citizens of China, Hong Kong, Macao and Taiwan. He immediately ran to get in line and said, "Although I waited over 10 hours just to get on a bus, at least I was finally out of Kansai Airport."

He said that during the transit process, Chinese embassy staff boarded the bus and asked how many passengers were from Taiwan, Hong Kong and Macao, however, he emphasized that "No one asked us to call ourselves Chinese at all."

According to a report by Apple Daily, another Taiwanese tourist pointed out that a Chinese couple had invited her to join them in getting on a bus sent by the Chinese embassy, when they saw her standing alone. She initially had been worried that once she got on the bus the staff would check her passport and shout out propaganda slogans when she boarded the bus.

However, she said "nothing happened" over the course of the four hours it took to get to Osaka Station.

According to statistics released by the Chinese consulate in Osaka, a total of 32 Taiwanese boarded the buses dispatched to evacuate passengers from Kansai Airport.