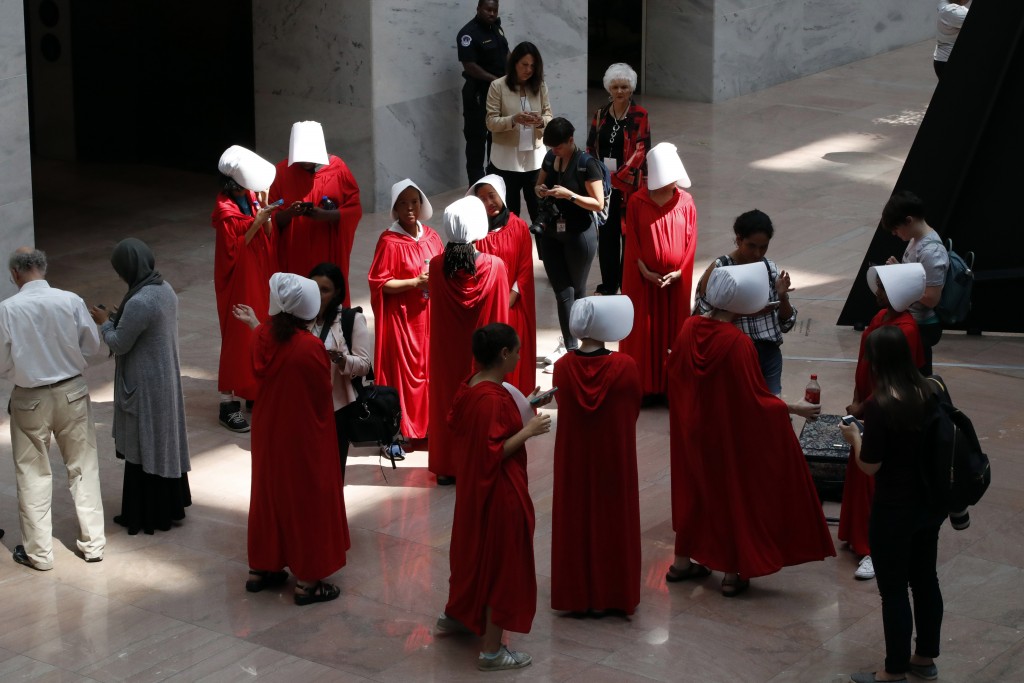 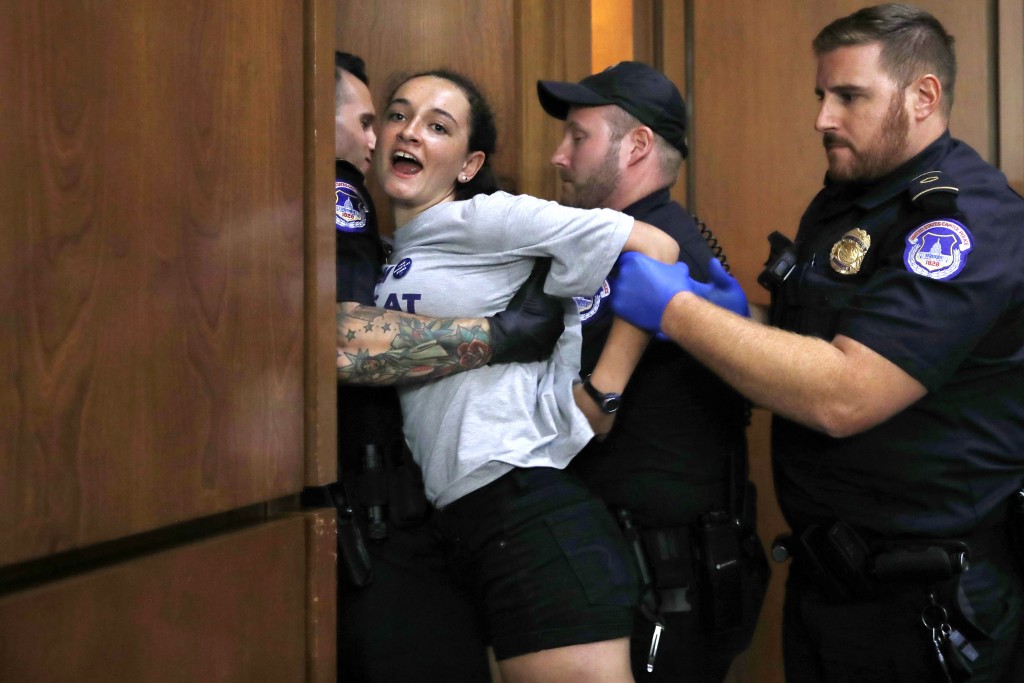 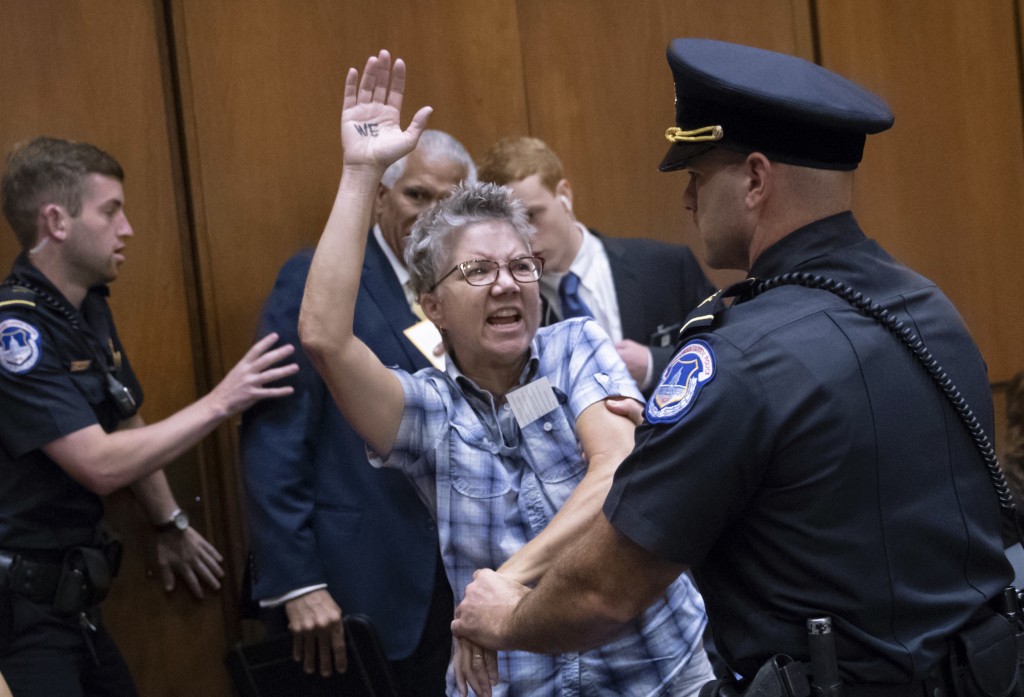 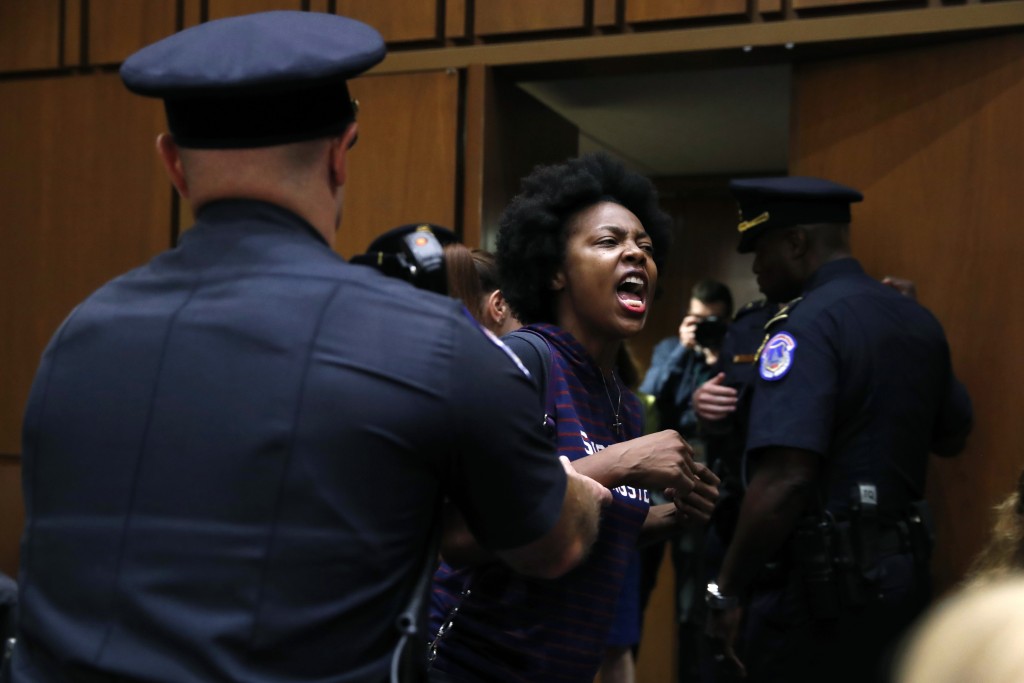 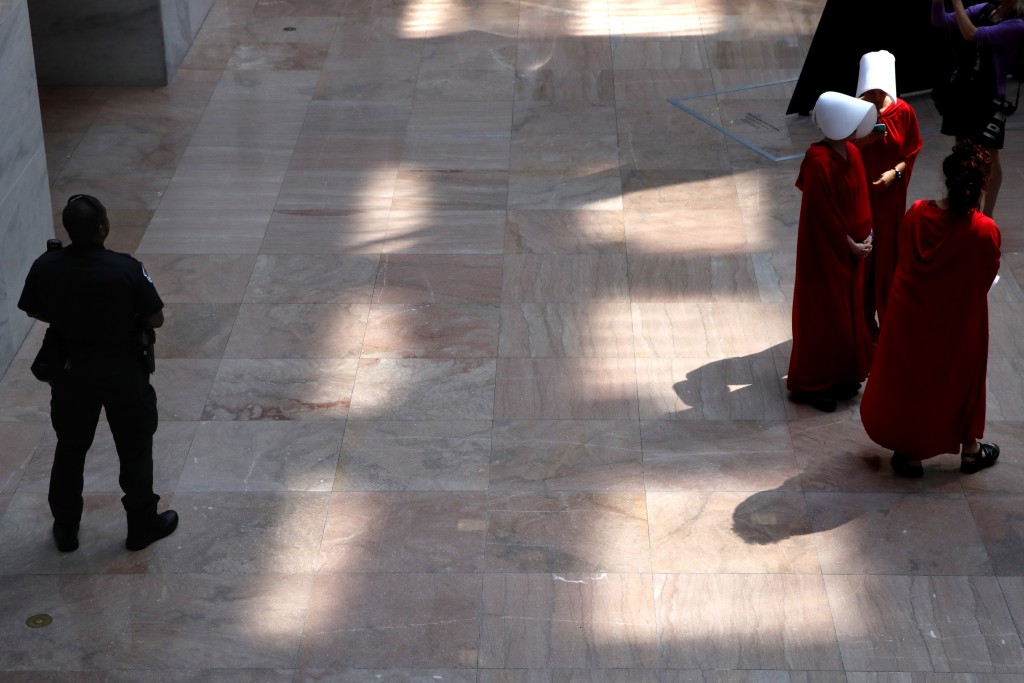 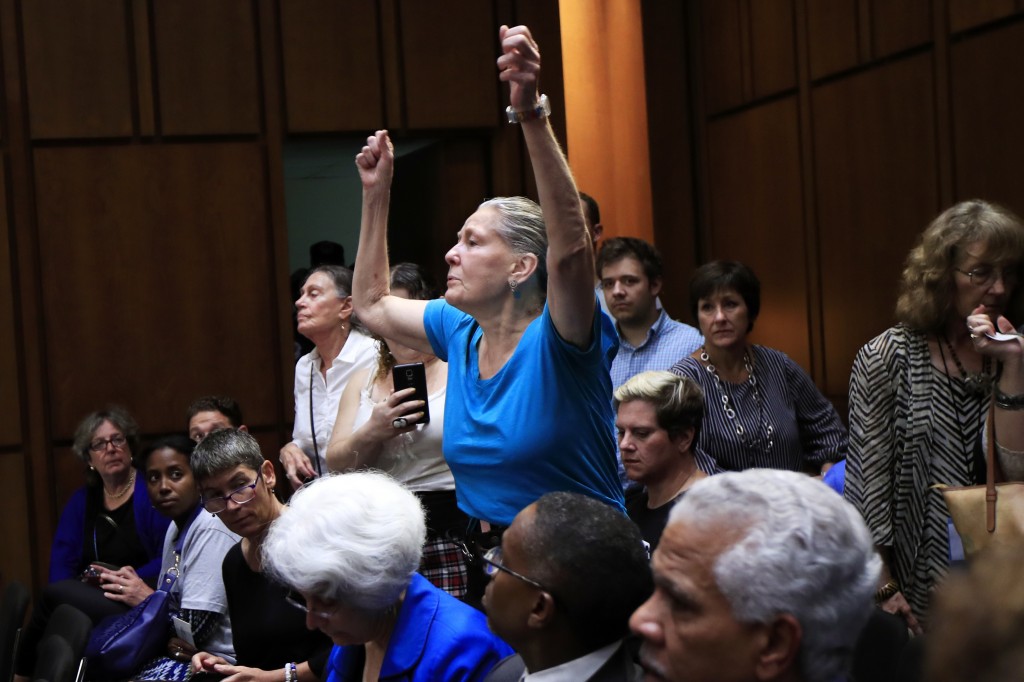 WASHINGTON (AP) — It's sort of a coordinated dance, but the performers are an organized group of protesters and a dozen or so uniformed Capitol Police officers. And the stage is this week's Senate confirmation hearings for Supreme Court nominee Brett Kavanaugh.

One by one, the protesters, many wearing T-shirts that say "I am what's at stake," interrupt the proceedings by shouting slogans like "You're making a mockery of democracy!" or "Senators: Do your jobs and stop this hearing!" The police then warn that he or she will be arrested for any further disruptions. Minutes later, the person shouts again and is hustled out a side door.

Then another person repeats the process.

Eventually, the back two rows of the hearing room, which are reserved for the public, are empty, and another 20 or so visitors are escorted in from a line outside. They wait for their turn to shout and be arrested.

Overall, 70 people were arrested Tuesday and charged with disorderly conduct on the first day of the Kavanaugh confirmation hearings. The second day of hearings on Wednesday was marked by the same sort of shout-and-arrest pattern.

The Capitol Police can't close the room to the public and can't keep out people who look like they might disrupt the hearing. So there's no choice but to let everybody in and wait for them to misbehave before removing them.

The protesters are part of a nationwide campaign to disrupt the confirmation process. A broad coalition of activist groups, including abortion rights groups, gun control organizations and labor unions, has converged on Washington. The demonstrators fear that Kavanaugh's confirmation would shift the Supreme Court's balance for years on issues like abortion rights, LGBT freedoms and gun control.

"My goal is for this nomination to not go through," said Alison Dreith, executive director of NARAL Pro-Choice Missouri, who was one of the people arrested Tuesday. "The stakes have never been higher."

It may be a quixotic goal. Republicans have the votes to confirm Kavanaugh and are expected to do so. The protesters are adding their voices to the outnumbered committee Democrats, who tried to delay the hearings, arguing that important documents about Kavanaugh have been withheld.

Dreith acknowledged that the numbers are on Kavanaugh's side but said she and other protesters are hoping to bolster Democrats on the committee and possibly sway one or two Republicans. They are also conducting phone call campaigns in each senator's home state.

At the very least, the protests managed to annoy one prominent Republican. Utah Sen. Orrin Hatch, after being interrupted by a woman in the crowd, snapped, "I think we should have this loudmouth removed. We shouldn't have to put up with this kind of stuff."

Dreith said she and the other arrestees were hustled down to the building's basement while wearing plastic zip-tie handcuffs and kept in a garage-like holding area. After about five hours, they were charged and released after waiving their right to a trial and paying a $35 fee.

A second group chose a different form of protest Tuesday. Nine women were arrested in the nearby Dirksen Senate Office Building for staging a protest dressed as characters from "The Handmaid's Tale," which depicts a dystopian future where women are controlled by the government and forcibly used for breeding purposes. All protests are against the law in the Capitol and its related buildings, and the demonstrators were charged under a D.C. statute for "crowding, obstructing, or incommoding."

Lacy MacAuley, a longtime Washington-based activist and one of the people arrested, said she joined the costumed protest "to remind everyone that it can happen here. It's not just fiction. Our rights could slip through our fingers unless we act now to defend them."