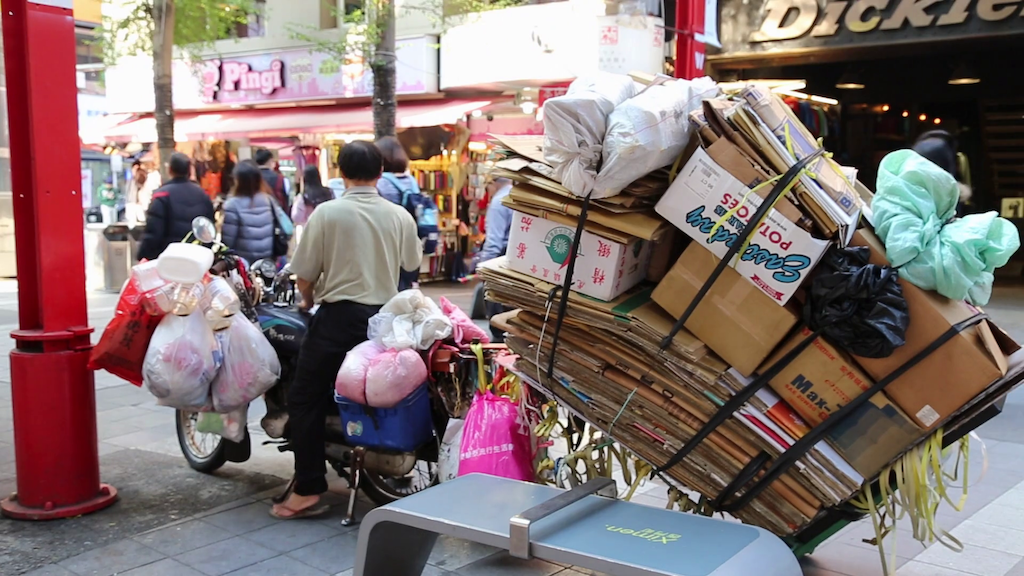 No matter where you live in Taiwan, you are almost certain to have seen pensioners collecting recycling. These enterprising Ama’s (阿嬤) and Agon’s (阿公) spend much of their time collecting recyclable goods from local homes and businesses which they can sell at their local recycling center for a small amount of money.

They are at the same time both inspirational and tragic. Inspirational for the entrepreneurial zeal they show in undertaking what must be, at times, back-breaking work to continue to provide for their families. And tragic because at their age, such endeavors really should not be necessary.

Taiwan’s fragmented social security system should be providing them with enough of an income to live off. But the reality is, while public sector pensions remain sky high, old age allowances are pitiful and simply not enough to keep many elderly people fed and clothed, never mind helping them to support other family members too.

The debate over how pension and allowances should be reformed in Taiwan is an important and complicated one. But even if it is resolved, it will take time, which is something many of these people do not have much of.

Most people would agree that, regardless of how any reforms were to be implemented, the very least the Taiwanese authorities should be doing is helping to ensure that those who rely on the income they get from recycling are able to continue doing so.

But, as I-Mei Foods Co. (義美食品) CEO Luis Ko (高志明) has revealed this week, that is not the case. Instead, the government is currently overseeing a pretty dramatic increase in the importation of overseas plastic waste. And this is having a devastating effect on many elderly recyclers.

By increasing the supply of waste, the overseas imports are driving down the value of recyclable products. It is a simple case of supply and demand. But while big waste companies are benefiting from being able to import foreign waste, it is the elderly recyclers who are losing out as the value of the recycling products they collect each day declines.

But this is not the only big question that has to be asked about this ill-thought-through policy. Another is about the environmental impact of disposing of increasing amounts of plastic waste.

Taiwan is already facing up to chronic air-pollution issues. For much of the year, the entire western side of the country is swathed in smog. There are frequent warnings for people not to venture outside or engage in strenuous outdoor activity during the winter months.

While the finger of blame for this pollution is often pointed at China, the data shows that the majority of it is actually created here in Taiwan. The environmental and public health impact of this pollution is profound, and the likelihood is that, in the long-term, we will come to realize it has had an even bigger effect.

The Taiwanese Government claims to be trying to reduce this air pollution. Over the past couple of years, there have been some laudable legislative measures passed, although many environmental activists claim these do not go nearly far enough.

But how can this stated policy priority be placed alongside the increased importation of overseas plastic waste?

The reason there is a market for importing plastic waste is that earlier this year, China banned the importation of this waste. If even heavy-polluting Communist China does not want to deal with it, that should be a clear message that the environmental effects are really not worth the small economic boost it delivers.

There is a justifiable argument that important recyclable waste and then processing it in Taiwan could be a growth industry and offer long-term economic potential. But, the fact is that much of this waste is not recyclable. And once it has been sorted, the non-recyclable products will simply be shoveled into incinerators and burned, adding yet more pollution to Taiwan’s atmosphere.

In his Facebook post, highlighting this issue, Luis Ko said, “If the policy was wrong or negligent, the government should explain and apologize, admit errors and make up for them immediately.”

He is absolutely right. There is scant evidence of any benefits of the importation of overseas plastic waste to anyone apart from the companies importing it. The environmental impact it will have on Taiwan is profound. And the economic impact on elderly recyclers could be deadly for many.

It is a rare thing to say, but Taiwan needs to follow the lead of Communist China on this issue. Decisive action is needed. The importation of plastic waste into Taiwan needs to be banned unless any company can guarantee that the overwhelming majority of the waste imported can be successfully recycled while meeting strict environmental criteria.

And, while age allowances in Taiwan still urgently need reform, until that happens, efforts should be made to ensure that Taiwan’s army of recycling Ama’s and Agon’s can at least earn enough to sustain themselves.

Luis Ko ends his post by saying, “Do not come up with all kinds of excuses.” Sadly, too many Taiwanese politicians are prone to doing this rather than tackling an issue head-on. This is an important issue which requires brave and decisive politicians. Let’s hope Taiwan’s elected officials can rise to the challenge.