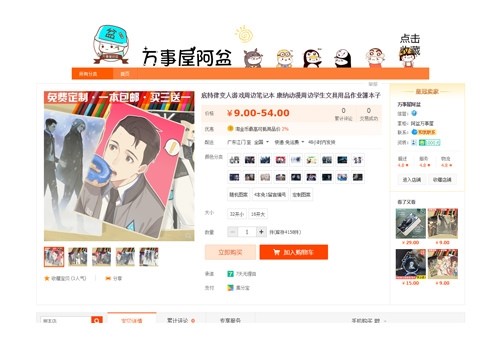 TAIPEI (Taiwan News) -- To help out a frustrated Taiwanese artist whose pirated works were being sold on Taobao despite his requests to have his artwork taken down, a Taiwanese netizen declared the illustrator to be "pro-Taiwan independence," spurring the online vendor to immediately take down the unauthorized content.

Taobao and other Chinese online e-commerce platforms are notorious for selling pirated artwork which originated from Taiwan, but because of strains in Cross-Strait relations, originators of the art have little legal recourse. On Aug. 26, a netizen on the popular online forum PTT posted an account of how they convinced a Chinese Taobao vendor that the artist behind the pirated illustrations they were selling was in favor of Taiwan officially declaring independence from China.

In the PTT post, a screen capture of the conversation shows the Taiwanese netizen telling the Chinese Taobao vendor "The Taiwanese author of this illustration is a pro-Taiwan independence separatist." The Chinese vendor quickly asked what they were talking about and the netizen retorted, "if someone finds out, this would be bad to post on Weibo," and added "once you’re labeled this way, there's no point in continuing your business."

Within 10 minutes all of the unauthorized artwork had been taken down from the Taobao store. In response, the netizen joked, "To prevent Chinese vendors from selling pirated images 'Taiwan Independence" is both fast and effective!"

Many other PTT netizens poked fun at the vendor's response:

"So, it turns out Taiwan independence can get these kinds of results XD."

"Taiwan independence really protects many things, it is the patron saint of intellectual property."

"Ha-ha! He is a master for locking him up because of Taiwan independence."

"The first sign of disagreement in the conversation is Taiwan independence." Illustration for sale on Taobao. (Screenshot from PTT) Another one of artist's illustrations on sale on Taobao. (Screenshot from PTT)