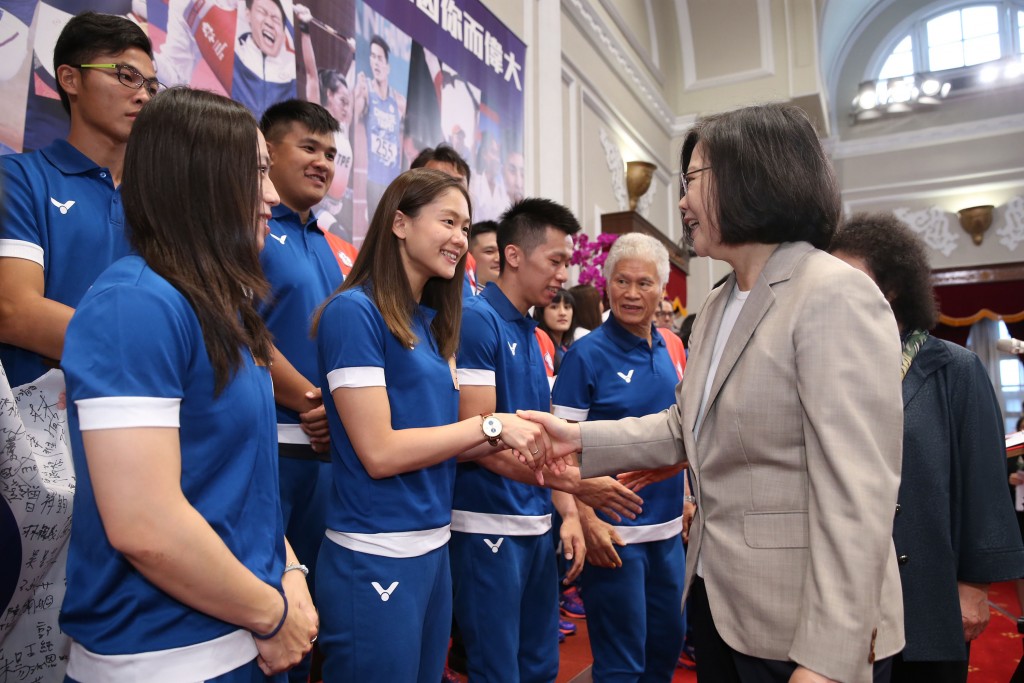 TAIPEI (Taiwan News) – President Tsai Ing-wen (蔡英文) welcomed home the athletes of Taiwan's most successful Asian Games campaign in 20 years, with a reception at the Presidential Office in Taipei on Sept. 4, reported CNA.

Hundreds of Taiwan's athletes were greeted by a "sword gate" to symbolize glory, according to CNA. During the 2018 Asian Games, Taiwan recorded 17 gold, 19 silver, and 31 bronze medals. For this effort, Taiwan was ranked seventh overall and the gold medal tally was highest since the 1998 Asian Games in Bangkok.

En route home from Indonesia, the athletes were escorted by two F-16 fighter jets as part of a hero's welcome.

Tsai also recognized the efforts of support staff like coaches, physiotherapists, and dietitians. "They are not fighting players on the court, but their importance is irreplaceable" said Tsai.

Tsai said that for the 2018 Asian Games campaign, the government had allocated more funds, and this cash was used on a chartered flight, better accommodation, and funding for support staff. Tsai said this level of government support was the baseline, and the government is keenly looking forward to future success at the 2020 Tokyo Olympics.

In terms of funding, Tsai said the government would accelerate their pledge to double the funding allocated to sport.

Taiwanese discus thrower and shot putter, Chang Min-Huang (张铭煌) was singled out for his continued service and performance, since first representing Taiwan at the World Youth Championships back in 1999. "This country is great because of you" (CNA image)