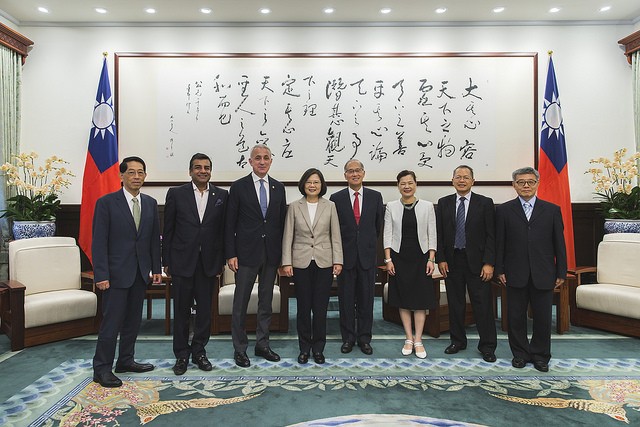 TAIPEI (Taiwan News) — President Tsai Ing-wen (蔡英文) said Tuesday that Taiwan will continue efforts to promote regional economic integration and to participate in the trans-pacific agreement that was inked earlier this year by 11 countries.

The president met with the delegation of the Confederation of Asia-Pacific Chambers of Commerce and Industry (CACCI), the largest trade and industry association in the Asia-Pacific region, including its president Jemal Inaishvili and vice president Samir Modi, on Tuesday at the Presidential Office.

Speaking of recent trade disputes and protectionist measures implemented in certain countries, which have brought about much uncertainty to the global market, including Asia, the president said Taiwan will continue to uphold a liberal trade policy and promote regional economic integration through taking part in bilateral or multilateral trade agreements.

“We will continue our efforts to participate in regional economic integration and initiatives, like the CPTPP (Comprehensive and Progressive Agreement for Trans-Pacific Partnership), and doing everything possible to participate in the second round of negotiation,” added President Tsai.

Tabbing the CACCI as a very important non-governmental partner, the president said the government looks forward to strengthening cooperation with the organization and hopes it can also help with the implementation of her administration’s New Southbound Policy in partner countries across South and Southeast Asia.

The president also encouraged the CACCI to continue fostering the growth and development of enterprises in the Asia-Pacific region, particularly those that operate in smaller scales or are run by women and young people.

The CACCI, founded in 1966, describes itself as a regional organization of business enterprises which covers 27 economies in Asia and the Western Pacific. The CACCI delegation is in Taiwan until Sept. 5, before heading to Mongolia for a business conference. On Monday, the delegation visited I-Mei’s factory in Taoyuan and was received by the company’s chairman Henry Kao (高志尚).