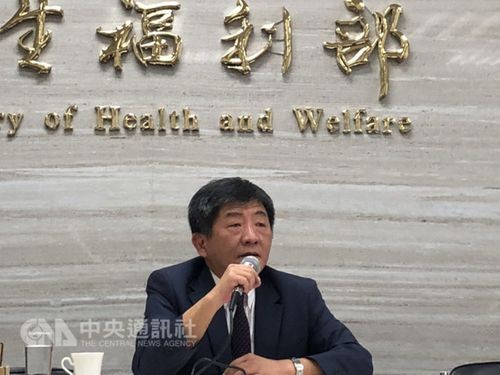 Speaking at a press conference, Minister of Health and Welfare Chen Shih- chung (陳時中) said he met with Azar in Washington, D.C. earlier this week to exchange opinions on diseases and disaster prevention, as well as other issues related to public health.

Chen said the U.S. looks forward to working with Taiwan and that the country is pleased to continue its support for Taiwan's WHA efforts.

According to the health minister, Azar also told him that he had recently called on the director-general of the World Health Organization (WHO), Tedros Adhanom Ghebreyesus, to seriously consider allowing Taiwan to participate in the WHA.

Following their discussions, Azar posted on Aug. 30 a picture of himself with Chen on his Twitter account, with the text: "Great meeting today with Chen Shih-chung, Taiwan's minister of health and welfare."

Taiwan and the U.S. have worked together many times in the past, including the promulgation of epidemic prevention education targeting mainly Southeast Asian countries, Chen said.

The minister said he has also invited Azar to attend the upcoming Global Health Forum, which is set to take place in Taipei Oct. 28-29.

Asked if Taiwan has a chance of attending the WHA next year, Chen declined to speculate, although he told reporters that progress has been made in this regard.