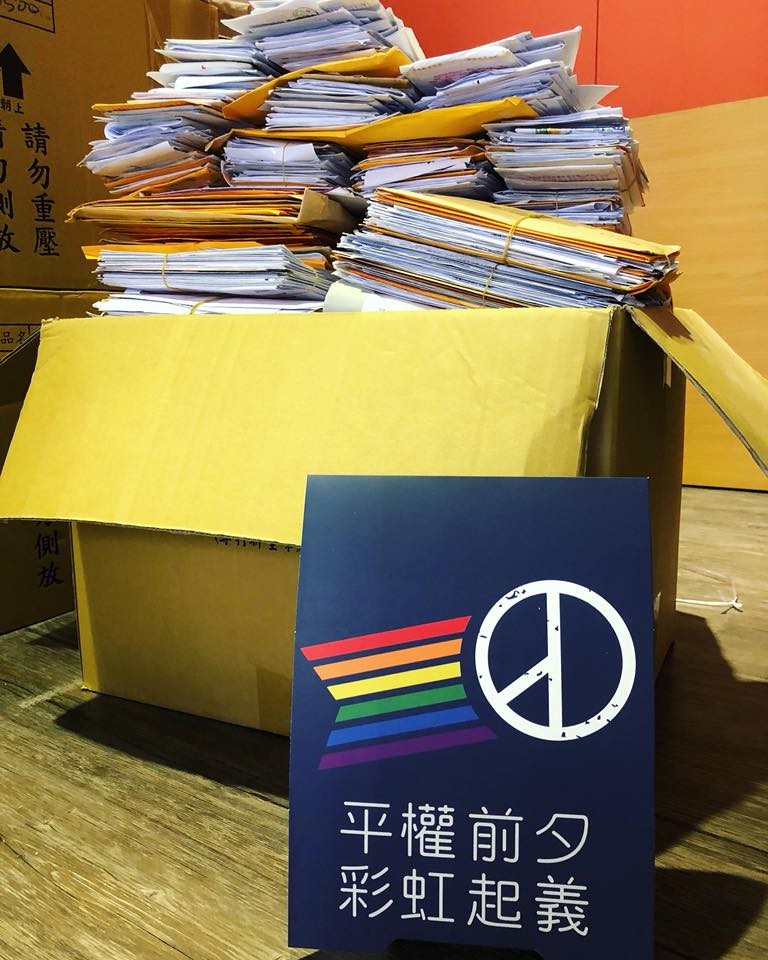 TAIPEI (Taiwan News) — With an average of 9,000 signatures collected each day, the petition for marriage equality passed the referendum threshold, announced the petition camp Thursday evening.

The petition for marriage equality has collected 330,000 signatures in 37 days, said the campaigners via Facebook. The signatures passed the threshold required by the Central Election Commission for filing a public referendum. Yet the campaigners still have to compile the signatures and send them to the commission by next Tuesday as requested for verification before a referendum can officially be established.

The pro-gay marriage campaigners said they collected 80,000 signatures last weekend. “With every body’s will, courage, and blessing, we have set a record in the history of the referendum.”

The group also claimed the signatures for their petition were collected twice as fast as those of the anti-gay marriage camp. “This is also a very clear signal. The government should learn of how firm our determination to pursue marriage equality is.”

Even though Taiwan’s constitutional court ruled in 2017 that the current Civil Code, which does not recognize same-sex marriage, is unconstitutional and required an amendment, the legislative process has been slackened ever since.

With the reform of the Referendum Act passed earlier this year, which brought down the requirements for calling a public referendum, the anti- and pro-gay marriage campaigners have moved the battlefield to the referendum.

The result of the referendum can not override the constitutional court’s ruling, but it is likely to change how the Civil Code is amended.

In terms of the conclusion of marriage, the current Civil Code Article 972 states that “An agreement to marry shall be made by the male and the female parties in their own [con]cord.”

On the other hand, the petitions launched by anti-gay marriage groups for keeping the Civil Code unchanged and for introducing a separate law for gay marriage also passed the referendum threshold earlier this week.

However, a probe into a mass of suspected fraudulent signatures submitted by the anti-gay marriage campaigners has been set up by the Central Election Commission, reports said.

All the referendums, once established, will be voted on Nov. 24, the same day as local and regional elections.