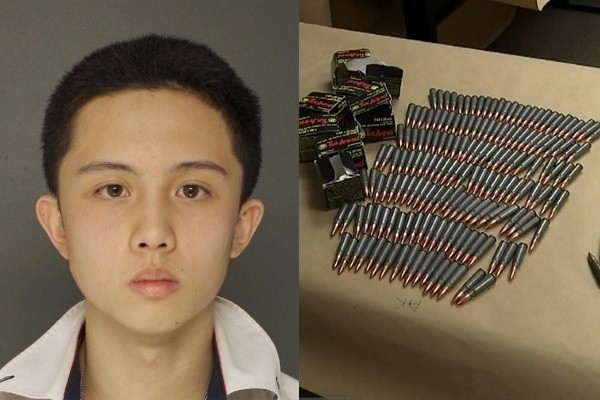 TAIPEI (Taiwan News) -- Taiwanese terror suspect An Tso "Edward" Sun (孫安佐) on Tuesday (Aug. 28) pleaded guilty to a federal firearms charge on the hopes that he will only be deported as part of a plea deal, reported AP.

As part of a plea bargain, Sun, the 18-year-old son of entertainers Sun Peng (孫鵬) and Di Ying (狄鶯), yesterday pleaded guilty to possessing ammunition while being in the U.S. on a non-immigrant visa, in exchange for agreeing to being deported and not re-entering the county without permission. Though the crime can result in a sentence of up to 10 years in prison and a fine of up to US$250,000, Sun is hoping that he will only be deported when the judge hands down a sentence.

Sun's lawyer Robert Keller is also asking that the date of the sentencing, which is currently on Dec. 11, moved up. Keller was cited by AP as saying that he hopes his client will come away from sentencing with a plane ticket home. "That's going to be the mantra, the cry, when he gets to sentencing. Let this boy go home," said Keller, according to the report.

Sun was handed down a sentence of 23 months in jail by the Delaware County district court on Monday (June 4) for making terroristic threats, but the judge immediately ordered a parole and transferred him to federal authorities for deportation. Though he appeared to be on the verge of returning to Taiwan after he agreed to plead guilty to terroristic threats, Sun was then immediately slapped with the federal charge of possessing ammunition while on a nonimmigrant visa.

Sun was charged for making terroristic threats on March 27 when he told a high school classmate "Hey, don't come to school on May 1... I'm going to come here armed and shoot up the school." The classmate then notified a school social worker, school authorities alerted the police and Sun was arrested at 9:38 a.m. the next morning after allowing a detective to question him.

A police search of Sun's bedroom, which is in the home of his host family, revealed that he had used a school-issued iPad to search the internet for ways to purchase AK-47 and AR-15 rifles. They also found a military style bulletproof vest, high-powered crossbow with a scope, 20 rounds of 9 mm ammunition, ammunition clip pouches, military ski mask, ammunition clip loader, and a device used for strangulation called a garrote.