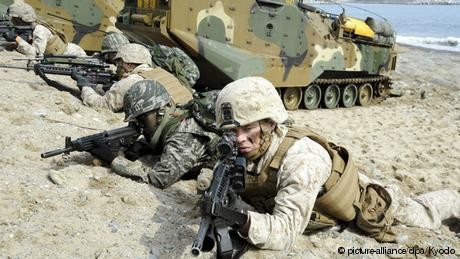 The United States declared on Tuesday that it would end its suspension of military drills on the Korean Peninsula.

'War games' on the Korean Peninsula

US runs out of 'good faith'

US Secretary of State James Mattis told reporters at the Pentagon that the US has "no plans at this time to suspend any more exercises," adding that the suspension was made as a measure of "good faith" by Trump following the Singapore summit.

Asked whether the resumption of military drills in the region could be viewed by Pyongyang as provocative, Mattis said: "Even answering a question in that manner could influence the negotiations. Let's let the negotiations, let the diplomats go forward. We all know the gravity of the issues we are dealing with."

It remains unclear when such drills are scheduled to resume.

Why are denuclearization talks failing?

North Korean officials first voiced their frustrations after US Secretary of State Mike Pompeo's stern warning to Russia and China against violating international sanctions against Pyongyang. Last week, Trump scrapped Pompeo's planned visit to the North, reportedly over what was deemed to be a belligerent letter from Pyongyang's vice chairman, Kim Yong Chol.

US U-turn on 'provocative war games'

Washington's offer to suspend further military drills was welcomed by many as the US and North Korea appeared to be headed towards a truce following the June summit. However, Trump's description of the military exercises as "war games" and as "provocative" raised eyebrows in security circles. The president had yet to comment on Mattis' announcement.