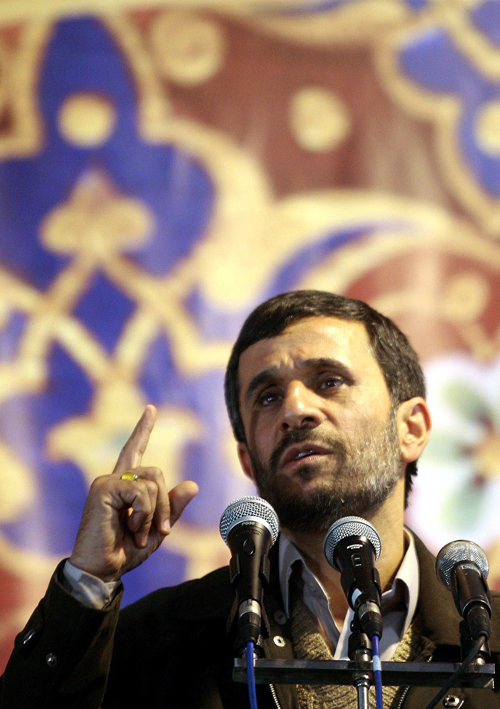 Iran vowed yesterday to start work immediately on drastically expanding its capacity to enrich uranium, defying the first ever U.N. sanctions against the Islamic republic's nuclear program.
Top nuclear negotiator Ali Larijani said work would start as early as yesterday on installing 3,000 uranium enriching centrifuges at a key nuclear plant, hours after the U.N. Security Council unanimously adopted a resolution against Iran.
"Our immediate response to the U.N. Security Council is that, as of today, we will start the activities at the site of the 3,000 centrifuge machines in Natanz and we will go ahead with full speed," Larijani said.
"We have said repeatedly that if the West wanted to exploit the U.N. Security Council it will not only have no influence but make us more determined to pursue our nuclear goals even faster," he told the hardline Kayhan daily.
President Mahmoud Ahmadinejad, in a speech in Tehran, dismissed the U.N. resolution as just a "scrap of paper" and said the West would have to learn to live with Iran possessing nuclear technology.
"Whether the West likes it or not, Iran is a nuclear country and it is in their interests to live alongside Iran," he said according to the semi-official Fars agency.
Installing 3,000 centrifuges would mark an important step for Iran towards an industrial scale enrichment of uranium, a process the West wants the Islamic republic to suspend as it can be used to make both fuel and nuclear bombs.
So far, Iran has two cascades of 164 centrifuges at the plant in Natanz in central Iran which it has used to enrich uranium on a research scale to levels high enough to make nuclear fuel.
Iran has maintained that it wants to have the 3,000 new centrifuges installed by March and Ahmadinejad has said the Islamic republic will be able to celebrate its "nuclearization" around that time.
"We will accelerate our program to install the 3,000 centrifuges" in response to the resolution, Alaeddin Boroujerdi, the influential head of parliament's security and foreign affairs committee, told state radio.
After weeks of diplomatic wrangling, the U.N. Security Council on Saturday adopted a resolution which imposes restrictions on Iran's nuclear industry and ballistic missile program.
The United States accuses Iran of seeking to develop a nuclear weapon, charges vehemently denied by the Islamic republic which says it only wants to provide energy to a growing population.
The resolution warned that if Tehran refuses to comply with U.N. demands to freeze enrichment, the Council "shall adopt further appropriate measures under Article 41 of Chapter Seven" of the U.N. charter, a reference to non-military sanctions.
Russia's U.N. ambassador Vitaly Churkin, who worked hard in weeks of diplomatic horse-trading to soften the resolution, expressed hope that Iran "will respond constructively."
U.S. Under Secretary of State for Political Affairs Nicholas Burns however pledged to wrench up the pressure on Iran beyond the resolution.
"We don't think this resolution is enough in itself. We want the international community to take further action ... We would like to see countries to stop doing business as usual with Iran," the U.S. diplomat said.