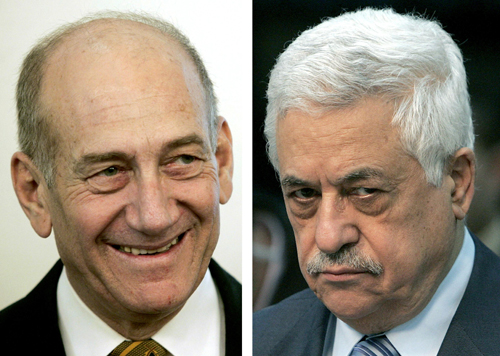 Israeli Prime Minister Ehud Olmert told his Cabinet yesterday that he planned to meet again with Mahmoud Abbas to build on the achievements of their first meeting, where he promised to give the Palestinian president millions of dollars in frozen funds.
As Olmert worked to ease tensions with the Palestinians, other ministers in his Cabinet were demanding that Israel authorize a military operation to end the ongoing Palestinian rocket fire from the Gaza Strip.
Gaza militants have fired more than 50 homemade rockets into Israel - including two yesterday - since a cease-fire between Israel and the Palestinians went into effect there November 26.
"We have to weigh a broad, clear operation in order to stop the Qassam (rockets)," Minister Shaul Mofaz, a former army chief, told the Cabinet on yesterday, according to a participant in the meeting. "It doesn't need to be only against the rocket squads, but should have an emphasis on the organizational commanders, and the decision has to be made as soon as possible."
Such an operation would almost certainly spell the end of the cease-fire agreement, even as Abbas and Olmert talked of expanding it to the West Bank. But during their meeting late Saturday, the Israeli leader also told Abbas that his patience with the rocket attacks was wearing thin.
In a series of goodwill gestures at the two-hour meeting, Olmert promised to ease West Bank restrictions and agreed to release US$100 million in frozen funds to Abbas to help ease the Palestinian financial crisis caused by an international aide boycott of the Hamas-led Palestinian Cabinet. Hamas, listed as a terror group by Israel, the U.S. and the EU, has refused international demands to recognize Israel and renounce violence. Abbas is from the more moderate Fatah movement.
"We decided to offer aid to the (Palestinian) civilians who suffer from the failed behavior of their government, which is not a part of the international community," Olmert told the Cabinet, according to a participant in the meeting.
The money, Olmert said, would be transferred in a system that would ensure none of it would reach Hamas. The money would go to alleviate a list of needs the Palestinians will submit, he said.
Olmert said he would meet again with Abbas to make more progress on "the diplomatic agenda."
Abbas spokesman Nabil Abu Rdeneh told The Associated Press that the meeting established the groundwork for a series of future gatherings between the two leaders.