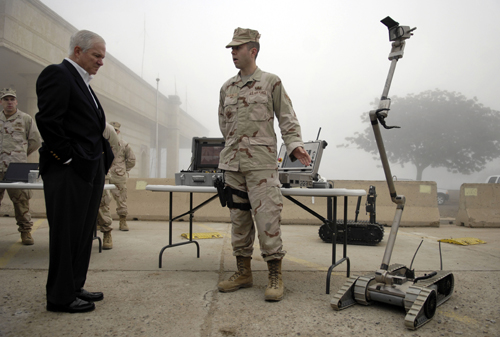 New Defense Secretary Robert Gates, just back from Iraq, briefed U.S. President George W. Bush on his trip amid a report that some U.S. military commanders had decided to recommend an increase in troops there.
Bush has said he would unveil a fresh plan for the increasingly unpopular Iraq war early in the new year. He has said a temporary increase in U.S. forces was one option he was considering.
Bush met Gates, Secretary of State Condoleezza Rice and other officials at the Camp David presidential retreat in Maryland, where he is spending the Christmas holiday.
Iraq trip
Gates, sworn in last Monday to replace Donald Rumsfeld, had three days of meetings in Iraq this week with military and political leaders.
The Los Angeles Times reported on Saturday that top U.S. commanders in Iraq have decided to recommend a surge in the number of U.S. combat forces there. The newspaper cited a defense official who was familiar with the plan and said that top U.S. commanders like Gen. George Casey and Lt. Gen. Raymond Odierno supported it.
However, a military spokesman in Baghdad said Casey, the highest-ranking U.S. officer in Iraq, "has not asked for more troops." Casey's position remains that he is "not necessarily opposed to the idea" of a troop surge, said Army Lieutenant Colonel Christopher Garver.
White House spokesman Blain Rethmeier said he could neither confirm nor deny the Los Angeles Times report. He said Bush was "leaving all options on the table" regarding his new plan for Iraq.
Casey, as well as General John Abizaid, the U.S. Middle East commander due to retire in early 2007, had publicly expressed skepticism about boosting U.S. combat troop levels in Iraq. They had said it would only heighten opposition to the American presence and reduce pressure on Iraqi leaders to take responsibility for security.
Others in the administration contend a temporary boost in U.S. troop strength would help stem the violence coming both from insurgents and from sectarian conflict.
Most Democratic lawmakers - who are set to take over control of Congress in January - are pushing for the start of a drawdown in U.S. forces, which currently number about 135,000.
Public discontent
Public discontent with the Iraq war led to crushing losses for Bush's Republican party in the November congressional elections. The war has killed nearly 3,000 U.S. soldiers and tens of thousands of Iraqis.
In addition to Gates and Rice, White House national security adviser Stephen Hadley and deputy national security adviser and J.D. Crouch also took part in the Camp David meeting.
Also present was Marine General Peter Pace, chairman of the Joint Chiefs of Staff, a picture released by the White House showed.
Bush, who leaves for his Crawford, Texas ranch tomorrow, will meet at the ranch on Thursday with his national security team. White House officials said that meeting was for "further consultations" about Iraq and was not aimed at reaching final decisions about the new strategy.