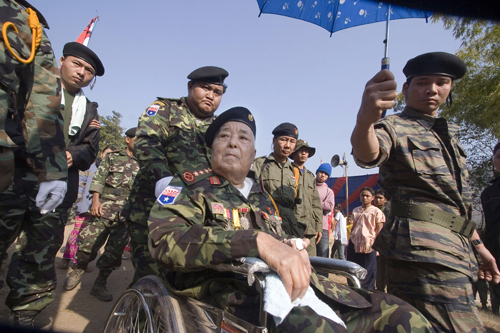 General Bo Mya, a longtime leader of Myanmar's largest guerrilla group, died early yesterday, a spokesman for the Karen National Union said. He was 79.
Bo Mya, who for decades led the fight for greater autonomy for the Karen and most recently held the post of defense minister, died at private hospital in western Thailand near the Myanmar border after suffering a long illness, according the group's spokesman David Thaw.
Thaw said Bo Mya had suffered a myriad of illnesses including diabetes and heart and lung ailments. He also had suffered a stroke more than a year ago.
His body has been taken across the border into Myanmar and he will be buried with full military honors tomorrow, the group said.
"This is the big loss for the Karen and all Myanmar ethnic fighters," said Mahn Sha, the group's general secretary. "General Bo Mya has led the fight of the Karen for more than five decades."
The Karen National Union has fought for autonomy since Myanmar gained independence from Britain in 1948. Once in control of large swaths of the Thai-Myanmar border, the KNU has seen its territory shrink to virtually nothing following the capture of their stronghold of Manerplaw in 1995.
Hundreds of thousands, according to expert estimates, have died in a conflict largely hidden from the international spotlight. However, human rights groups have documented continuing killings, rapes, forced relocations and burning of villages as the military seeks to control areas of Myanmar regarded as sympathetic to the Karen National Union and other insurgent groups. These atrocities are denied by the junta.
Bo Mya, who fought with the Allies against the Japanese in World War II as a member of the legendary Force 136, joined the struggle for autonomy in 1947 when he was still a policeman under British rule.
Over the years, Bo Mya essentially became the face of the movement, leading its fighters in the jungles of Myanmar, then known as Burma. But as defections mounted in the 1990s, there were demands to replace the domineering, stocky Bo Mya with a younger leader.
He was forced out of the top leadership position of the KNU in 2000, after a disastrous terrorist raid on a Thai hospital by a Karen splinter group, during which 10 rebels were killed by Thai commandos to free hundreds of hostages.
Still, Bo Mya remained a key member of the resistance, even heading a Karen delegation in an unsuccessful bid in 2004 to sign a peace pact with the military government.
Those talks fell apart after General Khin Nyunt was replaced in 2004 by more hardline generals who have intensified the campaign against the rebellious Karen minority. The fighting has been especially fierce this year, with Human Rights Watch claiming that a yearlong offensive has displaced 27,000 civilians and killed dozens more.
More recently, Bo Mya has largely faded from the scene because of his poor health. He appeared at a Karen event in January in a wheelchair, his speech slurred by a stroke, his right hand trembling.
"Dad is my hero and the hero of all ethnic fighters," said one of Bo Mya's sons, Ner Dah Mya, who is a top rebel commander. "My three brothers and I will continue to fight for the Karen people to fulfill the dream of our dad."
Bo Mya is survived by his wife Naw Lar Pow, seven children and two dozen grandchildren.