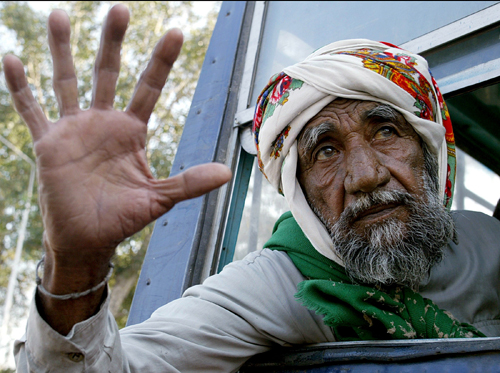 Pakistan and India agreed on Saturday to conduct a joint survey of a disputed estuary on their border, the latest step in a tentative peace process between the nuclear-armed rivals.
The agreement on the survey of the Sir Creek, that flows into the Arabian sea between the Pakistani province of Sindh and the Indian state of Gujarat, came after two days of talks between military officials in the Pakistani city of Rawalpindi.
Pakistan's Ministry of defense said the talks were cordial and technical details of the survey had been worked out amicably.
"It was agreed to commence the joint survey from January 15, 2007," the ministry said in a statement.
The dispute over the 100 kilometer long estuary has hampered exploration for oil and gas and led to the detention of hundreds of fishermen from the two countries.
Pakistani President Pervez Musharraf, who has called for compromise over the core dispute with India over the Himalayan region of Kashmir, said this month the Sir Creek dispute "can be resolved expeditiously with courage."
India and Pakistan have fought three wars since their independence from Britain in 1947 and nearly went to war a fourth time in 2002.
Relations have improved since they launched a peace process in early 2004. Diplomatic, sporting and transport links have been increased but the neighbors have yet to make any tangible progress on their central dispute over Kashmir.
Oil and gas deposits
Analysts say demarcation of the estuary should not be difficult to agree but decades of mistrust has obstructed a settlement.
The dispute has prevented the two sides agreeing on their maritime boundary and hindered exploration in an area thought to hold oil and gas deposits.
Authorities from the two countries also regularly arrest each others' fishermen in the estuary for illegal intrusion. Fishermen complain they often do not know whose waters they are in because of the dispute.
India says the boundary should lie in the middle of the estuary, basing its claim on accepted practice as well as pillars built down the middle of the channel during British colonial rule.
Pakistan says the border should lie on the southeastern bank of the creek, basing its claim on a line shown on a map drawn by the British governor of Bombay in the early 20th century.
The ministry said the two sides held useful discussions on various options to delimit the maritime boundary.
"It was agreed to verify the outermost points of the coastlines of both countries during the joint survey with regard to the equidistance method," it said. It did not elaborate.
As the officials were reaching agreement in Rawalpindi, Pakistani authorities released 70 Indians, many of them fishermen detained for encroaching in the Sir Creek, and sent them back to India. India released and sent home 54 Pakistanis.
But India said on Friday Pakistan was not fulfilling a commitment made in bilateral talks last month to release hundreds of fishermen. The ministry said India had confirmed 412 of its fishermen were in detention in Pakistan.