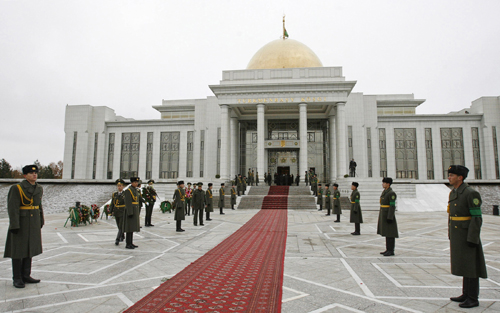 Even in a region characterized by autocratic rule, Turkmenistan's Saparmurat Niyazov stood out in ex-Soviet Central Asia. He was the most flamboyant, the most heavy-handed - and the first to die.
His passing at age 66 may have given a farewell lesson to his counterparts in Kazakhstan, Uzbekistan and Tajikistan and spur them to think about how they would like to leave the stage, analysts said.
By dying without leaving an apparent successor, or the democratic foundations for choosing one in open elections, he set up the likelihood of an internal power struggle.
Sometimes such struggles end quickly. Other times they sap the stability so dear to autocrats.
"Niyazov's death tells them (other leaders) that nobody is eternal," said Petr Svoik, a senior leader of the opposition For a Fair Kazakhstan movement.
Svoik said the swift sidelining of Turkmenistan's Parliament Speaker Ovezgeldy Atayev, who under the Constitution was to be acting head of state after Niyazov's death, "showed that nobody is going to follow any rules after an authoritarian leader's death, if there are no democratic mechanisms of rotation of power."
Kazakh political analyst Eduard Poletayev said the political uncertainty after Niyazov's death should make regional leaders ponder the advantages of democracy "when one can be sure that even though your term is limited to two and you have to face accountability for your actions, it still allows you to leave with dignity and have rest."
But in Kazakhstan, a sign emerged that President Nursultan Nazarbayev was thinking more about making his image more prominent than about what happens after he's gone. On Friday, the day after Niyazov's death, Nazarbayev's Otan (Fatherland) party renamed itself Nur-Otan, "to underline that the party represents the national leader Nursultan Abishevich Nazarbayev."
Nazarbayev, also 66, has ruled vast oil-rich Kazakhstan for 17 years.
Unlike Niyazov, he allows opposition and independent media, but keeps them under constant pressure. He holds elections but none of them, including the last one in December 2005 in which he overwhelmingly won a new seven-year term, has been recognized by Western observers as free and fair.
Like Niyazov, who has built numerous palaces and other grand public buildings, Nazarbayev is keen to immortalize himself in architecture - mainly thorough his new capital, Astana, that he has been building in the open steppe for the past nine years, a pet project that has already eaten up US$5 billion in investment.
In Tajikistan, President Emomali Rakhmonov, who came to power in 1994, changed the Constitution in 2003 so that he can technically stay in power until 2020.
Mukhiddin Kabiri, leader of the Tajik opposition Islamic Rebirth Party, described Niyazov as the most honest autocrat. "He said honestly that as long as he is in power there would be no question of democracy or power change. Others do exactly the same but pass it off as democracy," Kabiri said.
In Uzbekistan, like Turkmenistan under Niyazov, President Islam Karimov's regime has slid into international isolation. Karimov cut off ties with the West over criticism of the bloody crackdown of an uprising in the country's east in May 2005.
Karimov, 68, is not interested in indulging his ego by having his portraits hung on all buildings, and does not write poetry and spiritual books like Niyazov did.
Instead of adoration, Karimov appears to seek submission. According to rights groups, over the past decade Karimov has jailed thousands of innocent Muslims for alleged extremism, punishing them for practicing Islam outside state-controlled institutions.
Karimov has been in power since 1989, exiling or jailing opposition leaders and muzzling the press. His current term is up next year, but there has been no talk of any elections so far.
There have been persistent rumors that Karimov is in poor health. If he died suddenly, it could trigger a fierce fight between powerful regional clans and unleash the region's Islamic radical forces whose struggle is to a great extent fueled by hatred of Karimov for his suppression of religious dissent.
Both Nazarbayev and Karimov appeared to have drawn lessons from the March 2005 ouster of former Kyrgyz President Askar Akayev on a wave of opposition protests - the first power change in the region in 12 years.
Nazarbayev restricted laws on public protests and increased pressure on the opposition and independent media.
Karimov sent troops to suppress an uprising in the eastern city Andijan that broke out several weeks after the Kyrgyz uprising. The Uzbek troops killed more than 700 mostly unarmed demonstrators in Andijan, according to witnesses and rights groups.