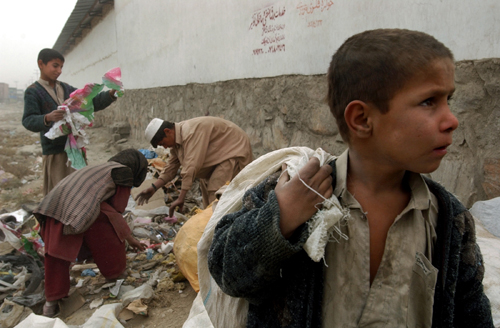 Ahmed Fawad pushed his handcart through Kabul's chaotic market center, past honking cars and braying donkeys, looking for a profitable spot to sell his pile of yellow apples.
But the corner traffic cop did not like the 14-year-old fruit seller taking up a lane of his traffic and chased him away. "Go away," the policeman shouted. "This is not the place to be selling apples."
Youngsters have to grow up fast in Afghanistan - particularly the 60,000 children who eke out livelihoods on the street. They sell produce or newspapers, collect empty soda cans, shine shoes or hail passengers for taxi drivers as a way to help their families survive.
Fawad's mornings are spent selling apples or red pomegranates, which can net him up to US$8 a day.
His afternoons are dedicated to his future.
That's when the teenager studies carpentry at a vocational training center sponsored by the Social Affairs Ministry. Fawad is one of 37,000 young Afghans taking part in some kind of job education across the country, said Mohammad Ghous Bashiri, a deputy minister.
The classes are held in provincial community centers, often with the help of aid groups. They are one way the Afghan government is trying to help street children, many of whom were orphaned by the country's wars in the 1990s.
Many street kids do not go to regular schools, because they cannot afford to buy supplies or because they must dedicate every hour of the day to making money.
A recent survey by UNICEF, Save The Children and the Ministry of Social Affairs found some 8,000 children age 14 and younger work on the streets of Kabul, said Wahidullah Barikzai, a ministry official. There are not any statistics to show whether that is up or down from previous years, he said.
Poverty runs so wide and deep in Afghanistan that families must struggle to earn money. Years of fighting, first by Afghan groups against occupying Soviet troops and then among the factions themselves, killed thousands of men, leaving many households without a breadwinner and untold numbers of women and children to fend for themselves.
Some working children say they also cannot take time to go to the training centers. "My father is dead," Ahmed Shafiq, 13, said while selling plastic bags on a crowded street. "And I have my mother and three sisters I have to support."
Fawad's fruit-selling job provides much of his family's income and pays for the family's US$40 monthly rent. His father hasn't been able to find work since he was fired from the Education Ministry last year, while his mother and 16-year-old sister make dresses they sell to neighbors. Fawad also supports his 9-year-old brother.
Fawad said he was excited when he heard about the carpentry course offered by a foreign aid group. He is tired of selling produce and wants the chance to do something different.
"I want to be a carpenter and participate in the reconstruction of my country," said the teen, who will soon earn a certificate allowing him to look for work in carpentry. "I will have a good income when I make windows and doors."
The Afghan aid organization Aschiana, which means "nest" in the Afghan language of Dari, offers street kids classes in subjects like carpentry, computers, music and theater.
Nearly 10,000 have attended the group's classes in three provinces, and hundreds have found jobs so far, said Mohammad Yasouf, the Aschiana director.
"We try to help those children who have nobody in their families to support the family to learn one of the skills, then we will provide the opportunity for them to find a job," he said. "We don't want them to be on the streets anymore."
Shoaib Ahmedi, a 12-year-old who washes cars and hails cabs for passengers to buy food for his family, comes to Aschiana's music classes with dirty hands and dirty clothes. But his face lights up as he practices the harmonia, a small keyboard instrument that sounds like an accordion.
"I have to work on the street and support my family. I have no any other choice," he said between songs. "I feel very happy when I play the harmonia by myself."