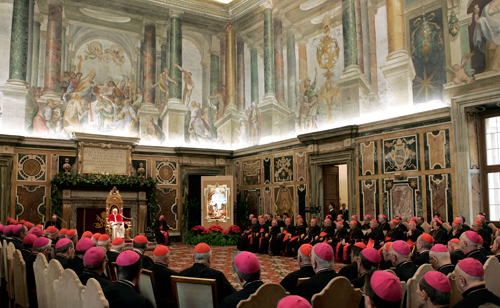 For sale: a charming, well-maintained building with high ceilings and classic architecture. Enjoy 3,420 square meters of space, minutes from downtown. Altars, bells and stained glass not included. Asking price: US$4 million.
Population shifts, declining Mass attendance and a shortage of priests in many areas have forced Roman Catholic leaders to consolidate parishes and sell off churches.
But selling a house of worship is no easy task. Pastors must placate parishioners upset by the sale and find a buyer who will respect the building's history.
Parishioners in Pittsburgh were riled in 1996 when the former St. John the Baptist Church became The Church Brew Works, a restaurant that brews beer near where an altar once stood.
"The issue wasn't the beer," said Ronald P. Lengwin, spokesman for the Catholic Diocese of Pittsburgh. "The issue was that we were told by the parish all sacred items had been removed before the sale. We found out later they had not been removed."
Two of Milwaukee's 216 Catholic churches are on the market. Eight have been sold since 2000. Three of the 134 Catholic churches in the Wisconsin capital of Madison are for sale after parishes merged, according to Brent King, spokesman for the Diocese of Madison.
Churches nationwide are undergoing similar changes.
The Catholic Archdiocese of Boston put 60 churches up for sale in 2004, many of which were converted into condominiums. The North Indiana Conference of the United Methodist Church in Marion, Indiana, has sold 30 churches in the past 14 years.
Most churches are sold to other denominations with growing membership. But in some cases, religious leaders have been forced to seek buyers in the commercial market.
St. Stephen Catholic Church in Milwaukee, built in 1847, sits about a mile from the Milwaukee airport and faces an adult lounge and a parking lot. The Reverend Richard Liska placed a "For Sale By Owner" sign in front of his brown brick church three years ago.
His parish hopes to relocate to a more appropriate setting, but Liska acknowledged the move could be hard for families who have celebrated baptisms, weddings and funerals there for generations.
"Part of the reason to relocate is to go to more of a people setting rather than an industrial or commercial setting," Liska said. "Still, I think parishioners would lament. When something has been a part of your life for a long time, there's lament."
Also, buyers are often intimidated by the cost of adapting a church for residential or commercial use, religious leaders said. The buildings tend to have high heating and cooling costs because of their towering ceilings and large open spaces.
And sales restrictions can limit the pool of prospective buyers, Liska said.
"We would not sell the property to anyone who would be using it for a purpose contrary to the nature, purpose or morality of a church," he said, mentioning an abortion clinic as one example of a forbidden purpose.
Church officials typically hire real estate agents or rely on worshipers to spread news of the sale. But one Internet-savvy congregation in central Indiana used eBay last year to sell its church to a Florida man who planned to convert it into a summer home. The 630-square-meter church sold for US$40,600, delighting Pastor Randy Davis who expected it would fetch only US$5,000 to US$15,000 because it was in Redkey, a bedroom community of 1,200.
Liska has worked with real estate agents, but he's hoping his "For Sale" sign will be as effective as a similar one in front of the former Shepherd of the Bay Lutheran Church in Ellison Bay. Carole Linden, a retired construction worker and occasional artist, spotted that sign as she drove by.
"It just seemed like a great piece of property," she said. "It's a magnificent piece of construction."
Linden persuaded her son Brian in 1995 to buy the 326-square-meter church for US$125,000. He turned it into Linden's Gallery, where he sells imported Asian collectibles.
Brent Williams, the director of finance for the North Indiana Conference, said buyers frequently get a good deal because of limited demand for aging buildings that require considerable renovations.
That might be why the Episcopal Diocese of Fond du Lac recently dropped its asking price for one church from US$149,900 to US$129,900.
"The building itself is 100 years old and while it does have a lot of intangible qualities, it would need some money for upgrading," church spokesman Matthew Payne said.
Liska said he remains hopeful his Milwaukee church will sell, even after sitting on the market for three years.
"When you work with the Lord," he said, "you never know when he's going to bring forth a miracle."